Chiefs TE Bell out after surgery for 'unusual' hip injury 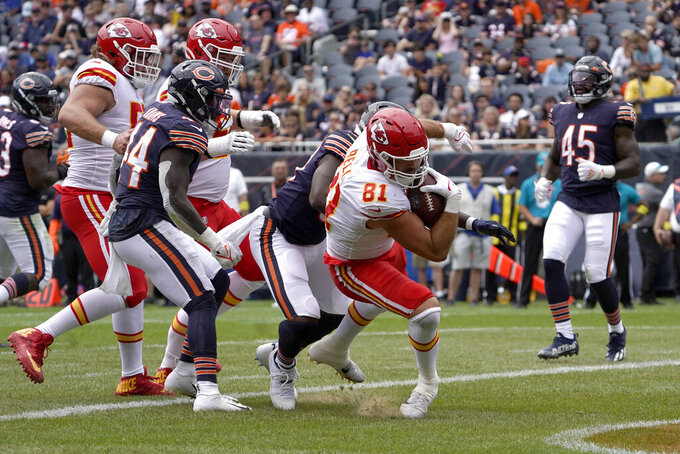 KANSAS CITY, Mo. (AP) — Chiefs tight end Blake Bell had surgery to repair what coach Andy Reid has termed an “unusual” hip flexor injury, leaving them without their primary backup to Travis Kelce for at least the start of the regular season.

Bell hurt the hip on a touchdown catch during the Chiefs' preseason opener Aug. 13 in Chicago. He tried to play through it but ultimately left the game, and the veteran tight end has not played or practiced since.

Asked when Bell might return to the field, Reid said Tuesday: “I don't think it's going to be real quick.”

Reid didn't say whether Bell would be placed on injured reserve next week, when teams are required to reduce their roster to the regular-season limit of 53 players. But he did acknowledge that “we're kind of throwing some things around.”

The Chiefs, who play their preseason finale against Green Bay on Thursday night, are better equipped to deal with an injury at tight end than perhaps any other position group. Kelce has been one of the best in the league the past several years and the Chiefs have capable backups in Jody Fortson and second-year pro Noah Gray.

Fortson, who is coming back from a season-ending injury to his Achilles tendon, had two touchdown receptions in last weekend's preseason game against Washington. Gray appeared in all 16 games as a rookie last season.

“You don't want it to happen to anybody,” Reid said of the injury to Bell, “but that position, we have some capable guys in there. Noah has worked very hard at it and done a nice job with it.”

The Chiefs rely heavily upon their tight ends, both as blockers in the run game and downfield threats in their wide-open passing attack. They used two tight ends on 22% of snaps last season, and only a handful of teams used three more often. Kelce surpassed 1,000 yards receiving for the sixth consecutive season while catching nine TD passes.

Bell has been his primary backup two of the past three seasons. He helped them end a 50-year championship drought with a Super Bowl victory in February 2020, then spent a season with Dallas before returning to Kansas City, where he started five games last season and appeared in all 16 while specializing in his blocking ability.

The Chiefs reached the 80-man roster limit Tuesday by putting running back Derrick Gore on injured reserve with a fractured hand and offensive tackle Lucas Niang on the in-season physically unable to perform list. The designation for Gore means his season is over while Niang, who had offseason knee surgery, cannot return until at least Week 5.

In other injury news, defensive end Carlos Dunlap is dealing with inflammation in his Achilles tendon, cornerback Rashad Fenton has a groin strain and wide receiver JuJu Smith-Schuster remains out with a sore knee.

Reid thinks Smith-Schuster will be back in time for the season opener Sept. 11 at Arizona.

“He's right there right now,” Reid said. “He's starting to kind of turn the corner the last couple of days. He's running on it.”

None of the ailing players will play against the Packers on Thursday night, and there's a chance Patrick Mahomes and most of the starters get the night off, too. Reid said he's counting the practice reps and plays from the first two preseason games but has not decided whether his Pro Bowl quarterback will take the field at all at Arrowhead Stadium.

“We'll see how that goes. He's been practicing,” Reid said. “I haven't made up my mind on all that.”

Regardless, the preseason finale is important for the second- and third-team players to make a final impression, both on the Chiefs and the rest of the league. Many of them will be looking for a job after next week's cuts, and the product they put on film is important in helping them potentially land a spot on a roster elsewhere.

“There's competition all the way through,” Reid said. “For starting positions and depth positions, we'll keep our eyes on that."