Chiefs veterans have something to prove in 2021 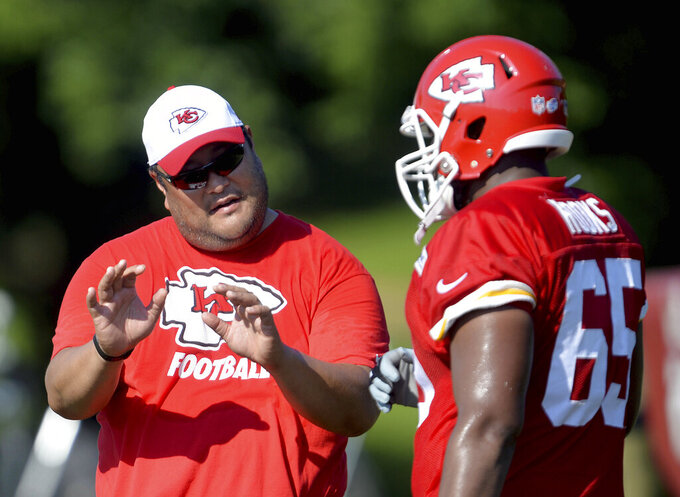 FILE - Then-Kansas City Chiefs assistant offensive line coach Eugene Chung, left, talks with lineman Tavon Rooks (65) during NFL football training camp practice n St. Joseph, Mo., in this Sunday, Aug. 2, 2015, file photo. Former NFL player and coach Eugene Chung is still waiting to meet with Commissioner Roger Goodell regarding an anti-Asian comment he says a team made about him during a job interview this year. Chung said on a conference call Monday, July 26, 2021, that he never was told by the league why a requested meeting with Goodell was not arranged nor how the NFL's investigation was conducted. (Andrew Carpenean/The St. Joseph News-Press via AP, File)

KANSAS CITY, Mo. (AP) — Mecole Hardman knows the exhilaration of walking off the field as a Super Bowl champion. Last February, he and his Kansas City Chiefs teammates also experienced the bitter disappointment of losing the biggest game of the season

“You still got that bad taste in your mouth,” Hardman said of his team’s 31-9 loss to Tampa Bay in the Super Bowl. “I think as a collective group we’re just all trying to get back to get that taste out of our mouth from losing that game.”

Kansas City’s veterans filed into Scanlon Hall dormitory on the campus of Missouri Western State University on Monday, ready to set aside last season’s disappointment and focus on the new opportunity at hand. The full squad starts training camp workouts on Tuesday, and it’s the beginning of a “prove-it” year for many players, such as Hardman who are nearing crossroads in their careers.

Hardman posted a solid rookie campaign in 2019 with 26 catches for 538 yards and six touchdowns. Big plays, however, eluded the receiver last season as he saw his yards per reception plummet from 20.7 to 13.7 yards. He finished the campaign with 41 catches for 560 yards and four scores.

The 23-year-old is banking on breaking out in year three. He admits that his rookie season was overwhelming at times, and last year’s pandemic-wrecked offseason stunted his potential growth.

“I think it’s helping me a lot coming into this training, this OTAs that I didn’t really have the last past two years because I was still in the water trying to swim for real,” Hardman said. “Now it’s like I’m going to float, I’m ready, I’m ready to go. It’s that time to take those challenges head-on and try to prove myself.”

One reason Hardman and the Chiefs offense struggled in the Super Bowl loss stemmed from injuries up front along the offensive line. The club sent their first-round selection in this year’s draft to Baltimore to acquire Orlando Brown Jr. to help anchor a rebuilt offensive line at left tackle. Brown is entering the final year of his rookie contract in 2021 and faces the challenge of illustrating to the Chiefs why he’s worth a long-term extension after the season.

That’s nothing new for Brown as he enters his first training camp with the club.

“I’ve taken it upon myself through my life to really feel like I’ve got something to prove,” Brown said. “I’m a very limited athlete as a player, as a person I’m not the shortest of guys, obviously I don’t often win a leverage battle, so I’ve always felt like I’ve got a lot to prove.”

“It was a lot of things to take from those different players,” Brown said. “Obviously we’ve got a lot of similarities in size and height and just how coach Reid was able to use them in his offense.”

On the defensive side of the ball, linebacker Anthony Hitchens understands he’s entering a new phase of his career in his eighth season in the league. He slimmed down during the offseason, entering training camp at 231 pounds, and spent more time running this offseason than in years past.

Labeled as “the glue” of the Kansas City defense by coordinator Steve Spagnuolo, the 29-year-old Hitchens remains under contract through the 2022 season, but the Chiefs could save $8.5 million by releasing the veteran after this season. That makes this a contract year of sorts for Hitchens, but he says that’s not on his mind entering training camp.

“Usually I don’t even think about things like that because I just prove it to myself,” Hitchens said. “It’s way more deeper than proving to a coaching staff and the organization. It’s more about my personal goals, and I have my own goals. I don’t share them at all with no one for a reason. That’s just what that is. Every year, I need to prove to myself that I can play.”

Much like Hardman, Hitchens is ready to put the Super Bowl loss in the past and move forward with a fresh new season.

“There’s work to be done,” Hitchens said. “It’s a new year starting today. We’ve got to start all over and try to accomplish it again this year. "

If the Super Bowl loss forced the Chiefs to reevaluate and reassess, it doesn’t appear to have taken away the swagger of the back-to-back defending AFC champions.

NOTES: The Chiefs placed long snapper James Winchester on the reserve/COVID-19 list and waived wide receiver Chris Finke with an injury designation. … Those moves cleared the way for the club to confirm the signing of defensive end Alex Okafor, who agreed to terms on a one-year deal with the club last week. The team also signed free-agent long snapper Drew Scott. … Chiefs president Mark Donovan announced the team is retiring longtime mascot Warpaint, a two-time Pinto World Champion who galloped on the field at GEHA Field at Arrowhead Stadium before games and after the Chiefs scored a touchdown.

By Rob Maaddi 27 minutes ago
By Josh Dubow an hour ago
By David Brandt 6 hrs ago
By Teresa M. Walker 6 hrs ago
By Tom Withers 17 hrs ago