Closing in: 1-win Bengals can clinch No. 1 draft pick 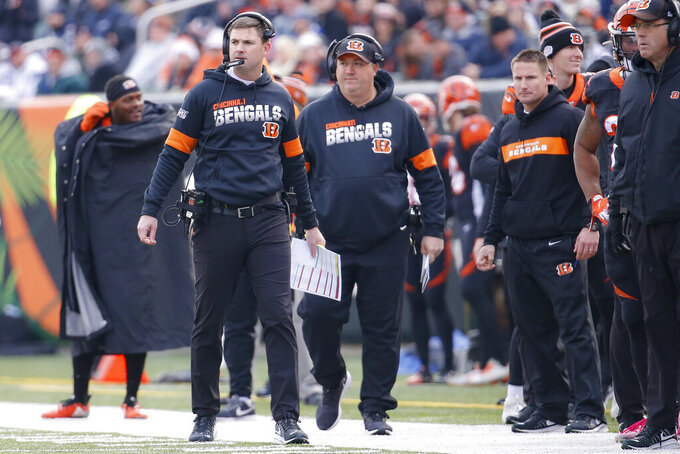 CINCINNATI (AP) — The Bengal days of December have arrived.

Another lost season is mercifully winding down. Fans are bringing banners to the remaining home games urging them to draft a quarterback.

Mostly, everybody — including the players — just wants it to be over.

"Do everything we can to win these last two games, and go from there,” quarterback Andy Dalton said.

Fans would like for them to lose one of the last two games and clinch the top overall pick in the draft. Banners at Paul Brown Stadium are providing not-so-subtle hints that Heisman Trophy winner Joe Burrow would look good in a striped helmet, like the one that former Bengals quarterback Boomer Esiason presented to Burrow during a pregame show on Sunday.

The Bengals (1-13) then lost to the Patriots 34-13. A loss again next Sunday at Miami (3-11) would clinch the NFL's worst record for 2019 and the top overall pick in next year's draft, giving them a shot at Burrow. The Giants, Redskins and Lions also have three losses.

One more loss also would clinch at least a tie for worst 16-game record in franchise history. The 2002 team went 2-14 under Dick LeBeau, who was then replaced by Marvin Lewis. The Bengals have finished 3-13 four times.

The run game has become effective since coaches overhauled the blocking schemes and started using more toss plays with Joe Mixon at midseason. He's run for 146 and 136 yards in the past two games against the Browns and Patriots, leaving him 75 yards shy of 1,000 for the season. The run game is the lone bright spot on offense.

“When you're going through a season like we've had, you really grab onto any positive you can,” center Trey Hopkins said.

Halftime adjustments. The Bengals haven't scored a second-half touchdown in any of the past seven games. During that span, the offense has managed seven field goals for 21 total points. Making it worse, the offense has given up 14 points in the second half over that span — on an interception and a fumble return — leaving it with a net of seven points after halftime in the past seven games.

“I don't have the answers,” receiver Tyler Boyd said.

Mixon. He barely got to the line of scrimmage in the first part of the season as the line got overwhelmed. He's been the only consistent producer down the stretch. Mixon slipped through four defenders on a 29-yard run that set up the Bengals' only touchdown Sunday.

The passing game just gets worse. A.J. Green hasn't played all season following ankle surgery. The Bengals hoped to get a deep threat back when John Ross returned from a shoulder injury that sidelined him for eight games, but he's been limited to a total of four catches for 52 yards in the past two weeks, his longest play 24 yards. Dalton matched his career high with four interceptions in the second half Sunday, one of them a pick-6.

Coach Zac Taylor said after the game that the receivers got “bullied” and failed to win one-on-one chances to come down with the ball. He said Monday he regrets using the term, but reiterated that the receivers need to do a better job of either catching the ball or preventing interceptions in man-to-man coverage.

“When you play man coverage and you put the ball in the air, you've just got to trust that the worst that's going to happen is it's going to be incomplete, and unfortunately that didn't happen," Taylor said.

Right guard John Miller left with a concussion in the third quarter. There's been no decision yet on whether Green will practice this week and try to play in Miami.

— 39.2. Dalton's passer rating against the Patriots was the fourth lowest of his career. Dalton threw four interceptions for the fourth time in his career and the first since last season at Carolina. The other four-interception games were against Baltimore. He'd hoped to end the season on a surge, but in the past two games he has completed 57 percent of his passes for 413 yards with two touchdowns and five interceptions, two of them returned for touchdowns.

Get through the next two weeks and start figuring out what to do at the quarterback spot for next season.