Coach: Not a big deal that Cam Newton isn't throwing yet 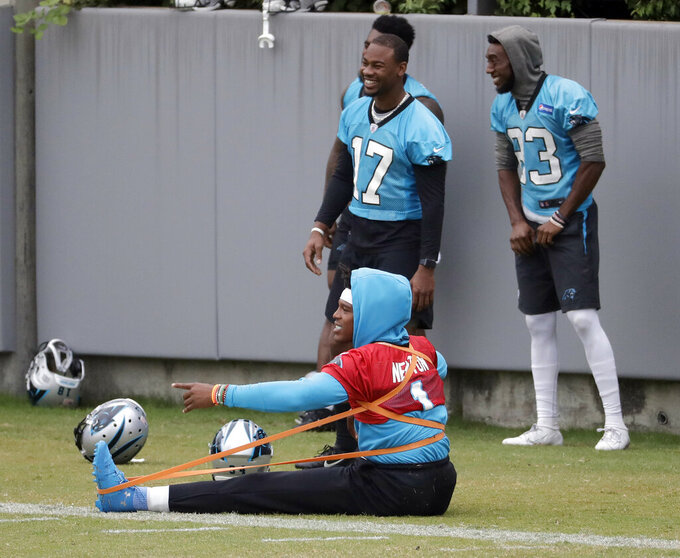 Rivera downplayed Newton sitting out of passing drills at organized team activities (OTAs) on Wednesday, saying it's a "really big not-that-big-of-a-deal." Rivera said there's still no timetable for when Newton will begin throwing again, but remains optimistic the 30-year-old QB will be ready to practice when the team opens training camp in late July.

"What (the medical staff) is doing is taking it day-by-day and week-by-week and evaluating," Rivera said. "They will just continue to go through the process, but there is no timeframe."

The Panthers say Newton underwent an "arthroscopic procedure" Jan. 24 after struggling to throw the football more than 20 yards downfield last season because of shoulder discomfort and lack of arm strength.

The 2015 league MVP watched organized team activities (OTAs) Wednesday wearing a blue hoodie with a red No. 1 practice jersey over the top, but didn't throwing any balls.

Rivera said he's seen progress with Newton off the field.

"I'm very optimistic and I think he's done a great job" with rehabilitation, Rivera said. "We will just continue to go forward with it until we are told what he can and can't do."

Newton was not made available for comment after practice, but told The Associated Press on May 10 that his throwing shoulder is "getting there."

This isn't the first time Newton has missed offseason practice time while recovering from shoulder surgery.

He had surgery in March of 2017 on the same shoulder and missed all of OTAs and most of training camp recovering from surgery to repair a partially torn rotator cuff. The Panthers still wound up making the playoffs that season.

With Newton out, rookie third-round draft pick Will Grier from West Virginia and last year's backups Taylor Heinicke and Kyle Allen took the reps under center.

"I think the biggest plus for us that we have three guys that we thinking can help us at quarterback and we are giving them every opportunity," Rivera said. "We are rolling guys through and each guy is playing with a different group every day, so I think that will help the guys around them and for those guys to assimilate to their teammates."

Rivera is particularly excited to see what a healthy Newton will do under center in his second season working under offensive coordinator Norv Turner.

"The first year definitely was a learning experience and unfortunately the arm weakness came up," Rivera said. "... I am anticipating a nice big step for everybody in the system."

NOTES: Professional golfer Harold Varner III took in practice from the sideline as a guest of Rivera. The Panthers coach has befriended Varner, who grew up in nearby Gastonia, North Carolina. Varner received a text message from Rivera after shooting a disastrous 81 in the final round of the PGA Championship on Sunday, which knocked him out of contention. Rivera told Varner to "keep his head up" and if he keeps working "good things will happen." Varner said Wednesday, "We keep in touch and talk about life, football, everything."