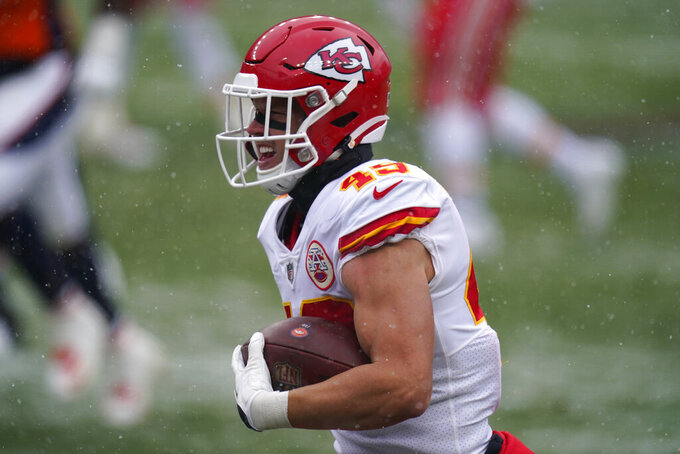 Kansas City Chiefs free safety Daniel Sorensen runs for a touchdown after an interception during the first half of an NFL football game against the Denver Broncos, Sunday, Oct. 25, 2020, in Denver. (AP Photo/Jack Dempsey)

DENVER (AP) — Now this was a cool celebration: Tyrann Mathieu slid into a patch of snow after his fumble recovery and performed a perfectly executed snow angel.

The Kansas City safety's play in the first quarter had a snowball effect for a Chiefs defense that forced four turnovers in a 43-16 win over the Denver Broncos on a frigid Sunday afternoon.

It was all fun and games in the wintry-like conditions for Mathieu and the Chiefs (6-1).

For Drew Lock and the Broncos (2-4), it was time to take a cold, hard look at just what went wrong as they dropped their 10th straight game to their AFC West rival.

"This week wasn’t the best for me," said Lock, who finished 24 of 40 for 254 yards and a QB rating of 57.7. “There’s a fine line between taking what the defense gives you and then when they don’t give you what you want, going and trying to make a play.”

Melvin Gordon had two fumbles and Lock two interceptions, including one that Chiefs safety Daniel Sorensen returned for a 50-yard score. This was almost like a turnover as well -- a 102-yard kickoff return by Byron Pringle on a special teams breakdown.

Anything that could go wrong for Denver, pretty much did. Even when the Broncos tried some razzle-dazzle, it went horribly awry. Like when Gordon took a handoff from Lock, and tried to lateral it back as part of a flea-flicker. But the pitch was off the mark and the fumble was recovered by Frank Clark.

In all, the Chiefs scored 17 points off turnovers.

“We just didn’t play well as a team to obviously give us a chance to win the game there,” Broncos coach Vic Fangio said. “The four turnovers, the kickoff return for a touchdown, you’re not going to beat a team like Kansas City doing that. A couple of the turnovers gave them good field position but our whole team just got beat today by them. They’re really good and we weren’t up to the challenge today.”

All this on a day when Patrick Mahomes wasn’t at his most crisp. He was 15 of 23 for just 200 yards. It took him until the fourth quarter to throw a TD pass in a 17th straight game, which is the longest streak in Chiefs history and longest the active streak in the NFL.

On this wintry-like day, the other two phases helped out the Kansas City offense.

“Us (the defense) obviously having a chip on our shoulder, not necessarily wanting to be the little brother, but wanting to be the reason or part of the reason why the Kansas City Chiefs are a great team," said Mathieu, who also had an interception early in the fourth quarter. "We’re still working toward that. We’re still building toward that. Anytime you have a performance like this where you can step up as a defense, it sends confidence through the whole locker room, that each unit can trust each other, each unit can feed off each other and grow off each other.”

The Chiefs' defense is starting to get back on track after a 40-32 home loss to the Las Vegas Raiders on Oct. 11. Last week, they bottled up Josh Allen and Buffalo in a 26-17 win. Then, on a freezing day — game-time temperature was 14 degrees — they made things miserable for Lock and the Broncos offense.

“As long as we play disciplined, sound, trustworthy football, there’s not many teams that can affect us in a negative way,” Mathieu said. “I thought the last couple weeks we’ve been taking some steps in the right direction. We still have a long season ahead of us.”

“That’s really what it is. We need to figure out what was going on,” Bolles said. "It makes me angry and upset, but at the same time, I know we have a lot of dogs in this locker room and it’s time for leaders like me to step up and hold everyone accountable and really turn this thing around.”