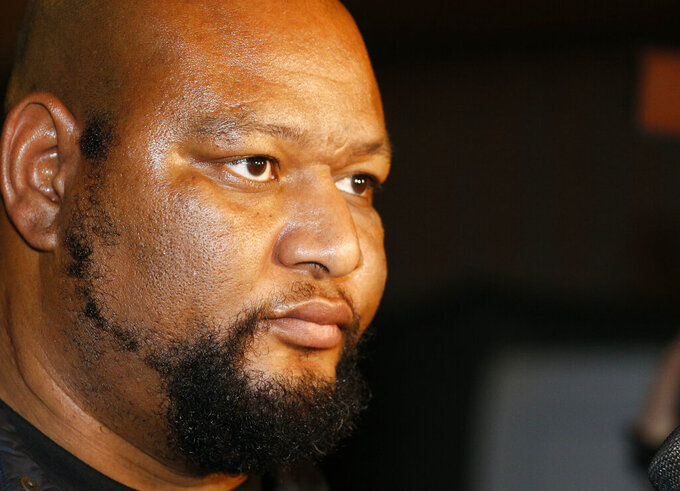 Deuce McAllister grew up in Mississippi and was well aware of the racial history of Ole Miss when he decided to play football there in the late 1990s. Even so, he never got used to seeing the Confederate battle emblem on game day.

“I'm playing with my brothers, my teammates,” said McAllister, who is Black. “You look up in the stands, you hear the cheers and the yells, but that's what you see.

"Inside, that doesn't make you feel very good.”

The former running back — who was also a two-time Pro Bowl selection with the New Orleans Saints — was part of the Rebels program in 1997 when a group of student-athletes and coaches brought their concerns about the Confederate flag to school administrators. Those conversations were part of the reason the school banned sticks, which largely stopped people from waving the flag at games.

More than 20 years later, McAllister embraces how college athletes across the country are actively using their voice and platforms to advocate for social change. They have a powerful avenue that McAllister and his peers didn't: Social media.

Mississippi State's All-Southeastern Conference running back Kylin Hill recently took to Twitter to make his feelings known about the current Mississippi state flag, which has the Confederate battle emblem in the top left corner.

“Either change the flag or I won’t be representing this State anymore. ... & I meant that .. I’m tired," Hill tweeted this week. Multiple other players — and even rapper Ice Cube — sent out messages supporting Hill's stance.

It was another example of college athletes using their influence to push for social change.

Athletes at several schools, including Oklahoma State,Texas and Clemson, have spoken out about racial injustice and police brutality after the death of George Floyd, a Black man who died while being detained by police in Minneapolis. In some cases, college athletes have led demonstrations and marches. In others, they've called for the renaming of buildings and removal of Confederate images.

— At West Virginia, defensive coordinator Vic Koenning was put on administrative leave after a player alleged on social media that the coach had made insensitive remarks. Koenning has apologized and said he's cooperating with a school investigation into his comments.

— At Iowa, dozens of former players came forward with messages on social media that detailed the mistreatment of Black football players in the Hawkeyes' program. The school eventually cut ties with strength and conditioning coach Chris Doyle.

McAllister, 41, has no doubt social media is the biggest reason for the added influence. He said having such an open platform can bring good or bad consequences, but when used effectively, it's a huge equalizer.

“It gives those players truly a voice," McAllister said. "It's an opportunity to connect with people quicker.”

NAACP President Derrick Johnson praised college athletes for coming forward with their concerns. He said they're among a select few people who can quickly push the national conversation forward.

“It's not just athletes — it's individuals with platforms and followings,” Johnson said. “They have the potential to be role models, to be trendsetters. They have a captive audience in many cases that they can speak to. In this case, many athletes have audiences that are listening to them."

Richard Lapchick, the director of The Institute for Diversity and Ethics and Sport (TIDES) at Central Florida, said calls for social justice sometimes come and go in waves with little change actually occurring, but this trend feels different.

“There are several things at play,” Lapchick said. “I think Generation Z and millennials are more passionate about social justice than previous generations. They have the technology and smartphones to capture something that can't be denied, because there it is in front of you. Social media allows people to communicate rapidly across the country and the globe.

“And then the last thing that's making a difference is athletes are active. Their voices are being heard.”

Sylvester Croom — who became the first Black head football coach in SEC history when he was hired by Mississippi State in 2004 — said the NCAA's recent trend toward making it easier for athletes to transfer schools and gain immediate eligibility has helped them find their voice.

Instead of worrying about playing time if a coach doesn't like what they have to say, athletes have more options. Croom spent much of his career as an assistant coach in the NFL and said college players often had concerns that were never addressed.

“A lot of college head coaches haven’t been listening to their players, that’s the bottom line,” Croom said. “Now this gives them a voice where the coaches have to sit down and listen. I would have players come into the NFL and one of the things I’d do, I’d ask players about their college experience. A lot of them didn’t speak up because they were afraid.”

Croom inherited a challenging situation when he became football coach at Mississippi State, rebuilding a roster amid NCAA sanctions for rules violations under the previous coaching staff.

He said Mississippi's flag made the job even tougher.

“Even being a Black head coach I ran into that problem extensively, particularly recruiting in Florida or up north,” said Croom, who coached the Bulldogs for five seasons. “Even when players were interested, if a family member opposed a kid coming to Mississippi, that was quite often a death blow.”

With so many players taking an active role, change is happening around the country, and that might include Mississippi changing a flag that's flown since 1894.

McAllister said it's been far too long, but “it’s never too late” for change.