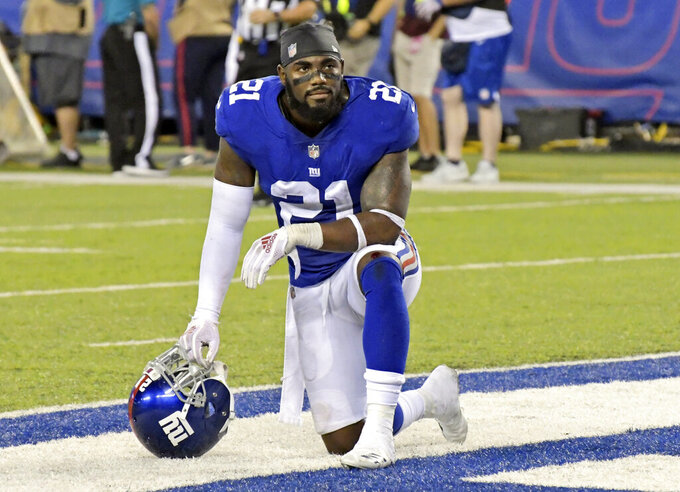 FILE - In this Sept. 30, 2018, file photo, New York Giants' Landon Collins kneels in the end zone during an NFL football game against the New Orleans Saints in East Rutherford, N.J. The Giants apparently have decided not to put a franchise tag on three-time Pro Bowl safety. The Giants’ leading tackler in each of his four seasons with the team, Collins on Tuesday, March 5, 2019, thanked the organization for four great years in a tweet and said he was looking forward to the next chapter of his football career. (AP Photo/Bill Kostroun, File)

The Giants on Tuesday elected not to put a franchise tag on their leading tackler in each of his four seasons with the team.

The NFL announced later in the afternoon six players were designated as non-exclusive franchise players. Collins was not on the list.

Teams can begin signing free agents at 4 p.m. EDT on March 13, a week from Wednesday.

In a tweet, Collins thanked the organization for four "great years" and said he was looking forward to the next chapter of his football career.

Collins' tweet came less than three hours before the NFL deadline for teams to put a franchise tag on an unrestricted free agent. The tag would have cost the Giants $11.15 million against their 2019 salary cap and general manager Dave Gettleman gave indications at the NFL combine last week that the price was steep.

"I want to thank the Giants organization for believing in me and allowing me to have 4 great years in NY," Collins tweeted. "I can't express how great it was to play with my teammates and in one of the greatest cities in the world. I will forever cherish my time in the blue and white and the relationships I have built in the building and in my community. Now on to the next chapter...."

The remaining Giants safeties are not playmakers like Collins. Veteran Michael Thomas and Sean Chandler are the top guys at the position, so the team may look to sign a free agent or draft a safety.

After the opening day of the 2015 draft, the Giants traded up to get Collins with the first pick in the second round. In return, New York gave Tennessee its second round pick (the eighth in the round), along with fourth and seven-round choices.

It turned out to be a smart move by then-general manager Jerry Reese, well worth the $6.12 million the team paid him for four seasons.

Collins was outstanding in his four seasons, leading the club with 112, 125, 104 and 96 tackles. The lowest number was this past season when the former Alabama star suffered a partially torn labrum against Chicago that required surgery. He to missed the final four games.

Collins also had surgery after the 2017 season to repair a broken right forearm sustained in the penultimate game.

The 25-year-old Collins started 59 games with the Giants and had 437 tackles, four sacks and eight interceptions, including one returned for a touchdown. He was also a leader in the locker room.

His best season was 2016 when the Giants went to the playoffs for the only time since winning the Super Bowl after the 2011 season. He returned to his natural strong safety spot after a year as the free safety and had 125 tackles and five interceptions, earning All-Pro honors.