Colts are huge challenge for Texans in wake of suspensions 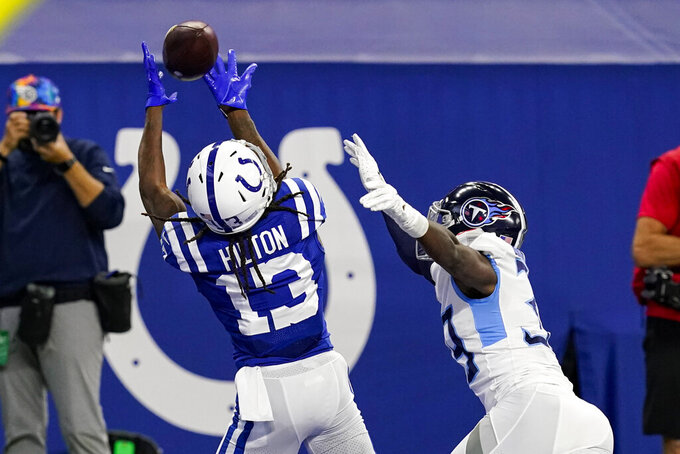 Indianapolis Colts wide receiver T.Y. Hilton (13) makes a catch for a touchdown in front of Tennessee Titans cornerback Breon Borders (39) in the second half of an NFL football game in Indianapolis, Sunday, Nov. 29, 2020. (AP Photo/Darron Cummings)

HOUSTON (AP) — The Houston Texans would have had their hands full against Philip Rivers and the Indianapolis Colts under the best circumstances.

Losing their top cornerback and receiver to drug suspensions this week made their task on Sunday much more difficult.

The Colts (7-4) are coming off a tough loss to the Titans, but have won four of six and rank fifth in the league in total defense.

Houston (4-7) has been playing better lately after a terrible start and has won two in a row for the first time this season. But the Texans suffered a serious blow this week when cornerback Bradley Roby and receiver Will Fuller were suspended six games each for violating the league’s policy on performance-enhancing drugs.

“Any time you have someone on your team make a misstep, that’s disappointing, then particularly when they are key contributors,” interim coach Romeo Crennel said. “So, what we’ll have to do now is everybody as a group will have to tighten the belt straps and put our best foot forward and get ready for the game on Sunday.”

Indianapolis coach Frank Reich doesn’t expect Houston’s offense to suffer that much without Fuller considering the way Deshaun Watson has been playing. The fourth-year quarterback has thrown 15 touchdowns with no interceptions in his past six games.

“Deshaun’s playing at a very high level,” Reich said. “I’m sure they think just like we think, it’s got to be the next man up and you have high expectations of the guy coming in.”

With Fuller out, Houston’s top receiver is Brandin Cooks, who ranks second on the team with 719 yards receiving. The Texans will also look for bigger contributions from Keke Coutee and tight ends Jordan Akins and Darren Fells to make up for the loss.

On defense, the Texans know how difficult facing an offense led by Rivers can be. Defensive end J.J. Watt, who returned an interception for a touchdown last week, raved about the veteran, who turns 39 next week.

“He’s one of the smartest players I’ve ever played against,” Watt said. “He can call out your blitzes. He can call out your defensive schemes. He can tell guys they’re misaligned on your defense. He’s a brilliant player who does an insane amount of film study, who works extremely hard to master his craft and he’s obviously done it at a high level for a long time. It’s a great challenge for us and I’m looking forward to it.”

Indianapolis will be without punter Rigoberto Sanchez this week after he had surgery Tuesday to remove a cancerous tumor.

Reich hasn’t said when Sanchez will return or how they’ll replace him this week. Rookie kicker Rodrigo Blankenship worked with the punt team at practice Wednesday and it’s possible the Colts will sign a new punter before Sunday.

But Sanchez is more than a punter. In addition to being one of the more popular personalities, he also kicks off and holds for Blankenship on field goals and extra points.

“We have guys on the roster that have held in practice and we’ve repped a lot of backup options, but we anticipate hopefully that we can have the punter be the holder,” special teams coordinator Bubba Ventrone said. “We’ll see how it goes and we’re prepared to have a position player hold if necessary.”

Colts receiver T.Y. Hilton is having a down year with just 408 yards receiving, but has had some of the best games of his career against the Texans.

Crennel is focused on making sure that Hilton doesn’t add another big game to his resume on Sunday.

“He has tremendous quickness and speed,” Crennel said. “He’s hard to cover one on one and so most of the time you have to double him to slow him down. That’s what in the past has been successful for us so, we’ll probably have that in the game plan this time.”

One focal point for the Colts this week has been a faster start.

Indy trailed at halftime in each of its past three games, rallying for wins against Tennessee and Green Bay before failing to overcome last week’s 21-point deficit in the Titans rematch.

So, after getting outscored 63-28 in the first half the past two weeks, the message has been simple.

“Offenses are scripting the first 15-20 plays and usually they have their best stuff in that 15-20 plays,” Reich said. “Well, that’s when we have to bring our best stuff. We have to find ways to stop that good stuff that offenses are bringing, and we’ll continue to work on that.”