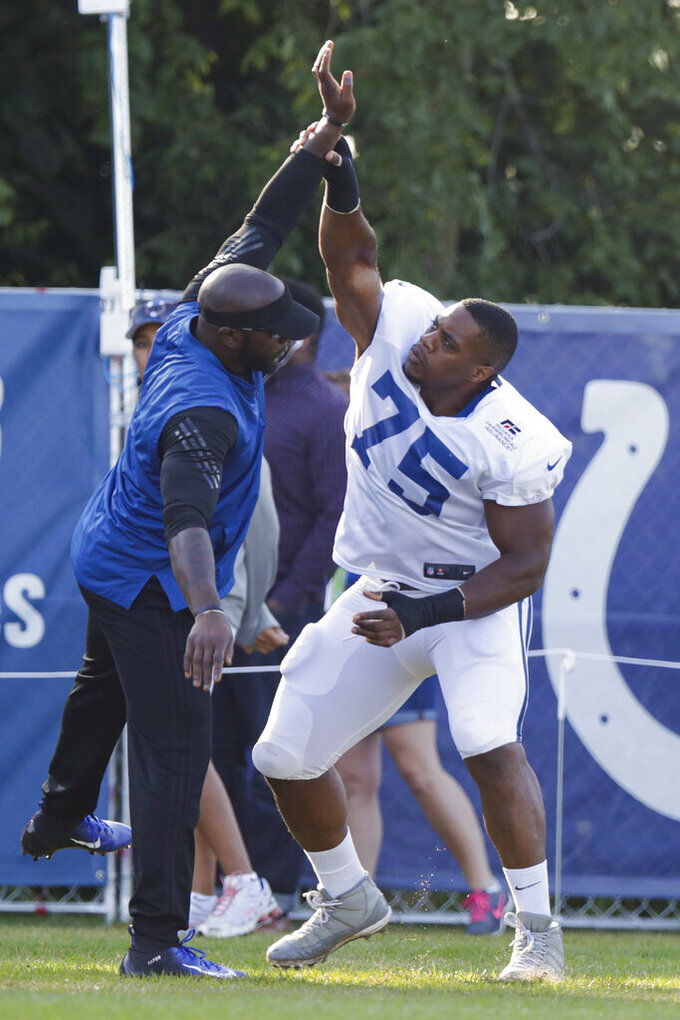 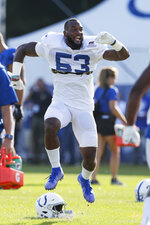 So rather than describe the progression as a momentum-building or game-changing season, the Colts threw out the numbers and have gotten back to work cleaning up what they can.

"We're starting over on everything from the basics up front, the techniques and fundamentals, everything that we talk about," defensive line coach Mike Phair said Sunday. "We have to be a great hustling defense and it all starts with our front. We set the tempo."

So far, it's worked perfectly.

What Phair and Indy's defensive staff wanted to instill was a consistent attitude that superseded the constantly changing names and faces on the roster.

And nobody could quibble with the numbers in Matt Eberflus' first season as defensive coordinator.

Indy jumped from 30th in scoring defense and total defense to 10th and 11th, from 26th to eighth in run defense, from 28th to 16th in pass defense and from 31st to 19th in sacks and the unit improved steadily throughout the season. Colts fans hadn't seen anything like it since its Super Bowl seasons.

But while everything looked good on paper, Eberflus, Phair and linebacker Darius Leonard and others understood the harsh reality — it wasn't good enough to win a Super Bowl.

Now, by reinforcing fundamentals and demanding the Colts play faster in their second season under Eberflus, the Colts believe they're primed for another major jump in 2019.

"Last year (at training camp), I didn't know the playbook," Leonard said. "I was one step behind because I was second-guessing myself and now I know exactly what to do in each situation. I know how the offense is going to try to hit me. I'm seeing all formations, I know what plays are coming out of formations, so I can move a whole lot faster."

That's bad news for a league that watched Leonard record a league-leading 163 tackles in 15 games, make the All-Pro team and earn the Defensive Rookie of Year award. Yet he spent the offseason studying how to eliminate the missed reads, missed tackles and missed opportunities.

He'll also have more help around him.

Ballard also went heavy on defense in the draft. He took play-making cornerback Rock Ya-Sin with his top pick and pass rusher Ben Banogu. Both second-rounders have stood out early in camp.

The Colts added linebacker Bobby Okereke in Round 3, hard-hitting safety Khari Willis in Round 4 and linebacker E.J. Speed in Round 5. Speed and Willis are already pushing for playing time and Okereke might not be far behind.

"He's jumping off the tape right now in terms of just hitting, speed and those things," Eberflus said when asked about Speed. "He still has a long way to go in terms of what to do and all those things and how to do it. Once he learns those he'll be better."

The Colts may need this defense to play significantly better, especially with Andrew Luck still out.

Luck missed all of the team's offseason workouts because of a strained left calf and after spending the first week of training camp on a limited workout schedule, Luck has been out for more than a week. Coach Frank Reich announced Saturday that Luck would return to the practice field before Thursday's preseason opener at Buffalo.

Reich had already said Luck wouldn't play against the Bills and it's unclear if he'll make any preseason appearances leading up to the Sept. 8 season opener at the Los Angeles Chargers.

"You won't see him out here this week," Reich said. "But just ramping it up from last week, it was so productive last week that we feel like we are on the right track."

And that means not talking about numbers or rankings for this young, improving defense.

Instead, the Colts would rather focus on getting the job done correctly.

"When you look at things you say, 'Well, I've got to do something special or something different.' That's never the case," Eberflus said. "You've got to work on fundamentals and techniques and do what you do better."