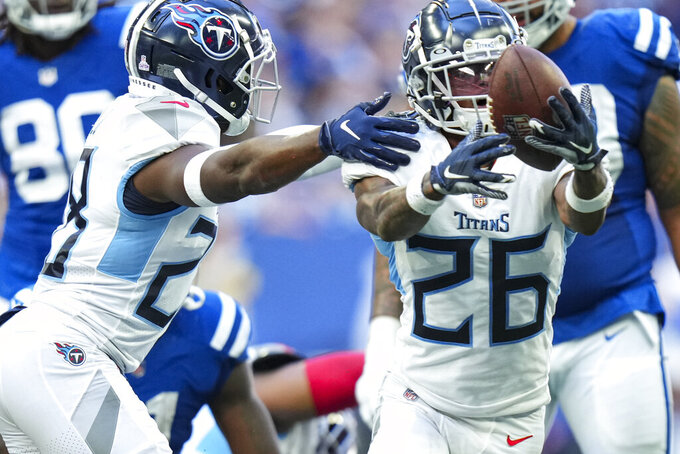 Tennessee Titans cornerback Kristian Fulton recovers a fumble in front of teammate Joshua Kalu in the second half of an NFL football game against the Indianapolis Colts in Indianapolis, Fla., Sunday, Oct. 2, 2022. (AP Photo/AJ Mast)

Four weeks into the season, it all seems to be slipping through Ryan's figures — literally.

Ryan fumbled twice in a 24-17 loss to rival Tennessee on Sunday, giving the 15-year veteran nine fumbles in four games. That puts him on pace for 38 fumbles this season, which would easily surpass the NFL record of 23 set by Kerry Collins in 2001 and matched by Daunte Culpepper in 2002.

The 37-year-old Ryan also threw his fifth interception and was sacked three times. He's as upset as anyone in the Colts locker room with the plight of 1-2-1 Indianapolis.

“I think you've just got to protect it better,” the 2016 NFL MVP said. “It’s a very uncharacteristic four-game stretch for me. It’s something I’ve got to clean up and get better at. If we can put together a clean game, I think we can be very good.”

So far it's not been good, and not just for Ryan, acquired from Atlanta in the offseason after 14 years with the Falcons.

While the Colts running game has ground to a halt, Indy's pass protection has been less than adequate and slow starts have become the norm.

Ryan's ability to keep two hands on the ball has been the biggest disappointment.

With 13 games left, Ryan is three short of matching his worst season fumble total. He's lost three of those fumbles, two shy of his career worst.

Colts coach Frank Reich knows his team can't keep giving away the ball — and scoring chances like they did Sunday — and make the playoffs. So something must change.

“I’m not going to sit here and point fingers at Matt or anybody else on the turnovers,” Reich said. “Sometimes, they’re on your quarterback, sometimes there’s a little bit more to it than that. But we look at it, we judge each one. We’ve just got to get better at it.”

The Colts don't believe things can get much worse.

One year after sharing the league lead for best turnover margin (plus-14), the Colts head to Denver on Thursday night with a minus-6 margin, near the bottom of the pack.

But because the Colts have been so unproductive with their moderate and deep throws, opponents have stacked line of scrimmage with extra defenders while waiting for Ryan or someone else to make a mistake. That seemed to be the game plan for Tennessee (2-2), too.

“Our guys were tough up front,” Titans coach Mike Vrabel said. "There weren’t a whole lot of seams. We know how talented he is and we know what he can do when he hits those seams. I give our guys a lot of credit.”

Tennessee, like Houston, Jacksonville and Kansas City in previous weeks, took full advantage by hounding and harassing Ryan into miscues.

The result Sunday: Ryan had one snap bounce off his hands — initially ruled a fumble and then changed — lost another ball when he was hit while winding up to throw and fumbled again when he couldn't quite tuck the ball away on a sack.

“It's just one of those things where as you’re getting ready to pull it and they’re in the right place at the right time,” he said of one play Sunday. “You have to trust other players to get the job done but, on the other hand, the ball is in my hand every snap, so it starts with me.”