Colts no-show in return to Jacksonville, get blanked 24-0 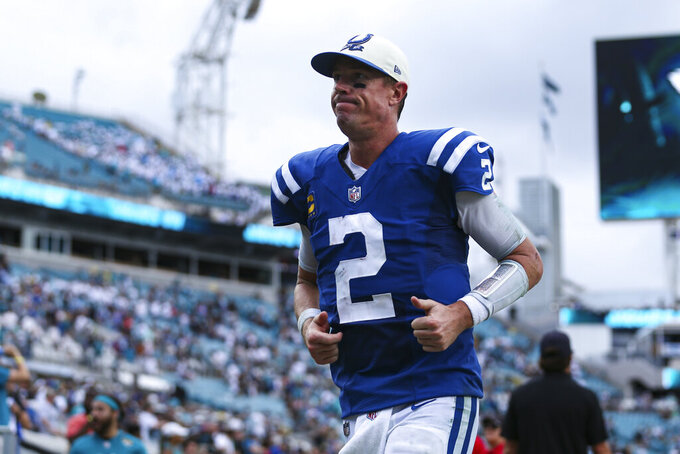 JACKSONVILLE, Fla. (AP) — The Indianapolis Colts waited eight months for a return trip to Jacksonville, a chance to prove last year's season finale was a fluke and a chance to end a head-scratching and embarrassing skid in the AFC South series.

They openly welcomed the opportunity to bury the memories of last year's debacle against the Jaguars and move on from last week's disappointment against Houston.

How did they handle it? Well, they were essentially no-shows.

Indianapolis was shut out for the third time in the past six seasons — all in Jacksonville — with the latest one a 24-0 drubbing that has to, at the very least, create speculation about coach Frank Reich's future with the franchise.

Matt Ryan was sacked five times, pressured way more often and threw three interceptions. Ryan and cornerback Stephon Gilmore were supposed to help get the Colts over the hump in 2022. With those additions, Indy was picked by some to win the division.

Instead, the Colts are winless after two AFC South games.

“I’ve got to play better,” Ryan said. “There’s no doubt about that. I think as a group we all have to play better, too. It’s disappointing when you put in the work during the week and you come out and you don’t play the way that you’re capable of playing.”

Ryan completed 16 of 30 passes for 195 yards, finishing with a passer rating of 34 — the third lowest of his career. His jersey was covered in dirt and grass stains after losing to Jacksonville for the first time in five meetings.

“I’ve got my (butt) kicked before, I know that much,” Ryan said. "It’s all about how you respond. You get up off the floor. It happens in this league. There’s good players across the board. Every week is going to be tough. It happens to you sometimes, but one can’t turn into two.

“You have to pick yourself back up, have a great week of preparation and make sure we have a better performance next week.”

The Jags loaded the box and held Jonathan Taylor to 54 yards rushing. Ryan was harassed behind an offensive line that was beaten early and often. And Indy failed to score against Jacksonville for the third time in six seasons; it also happened in 2017 and 2018.

Equally telling about this series: the Jaguars are 6-30 in their past 36 games, and four of those victories came against the Colts.

The latest one was never in doubt and gave coach Doug Pederson his first win with his new team.

Reich fell to 0-5 in Jacksonville, a dubious skid that surely won’t sit well with team owner Jim Irsay. Indy blew a chance to make the playoffs last season by losing the finale in Jacksonville, and Irsay made his disappointment clear at the time.

This one was equally shocking, especially after the Colts rolled up 517 yards at Houston a week ago and essentially blamed that season-opening loss on now-cut-kicker Rodrigo Blankenship.

The Colts finished with 218 yards in Jacksonville. They were 2 for 10 on third down and 0 for 2 on fourth. They were nearly doubled in time of possessions. It sure seemed like a lackluster effort.

Nonetheless, Reich shot down notions that his team wasn't ready for the rematch.