Column: Karma may still want a word with Aaron Rodgers 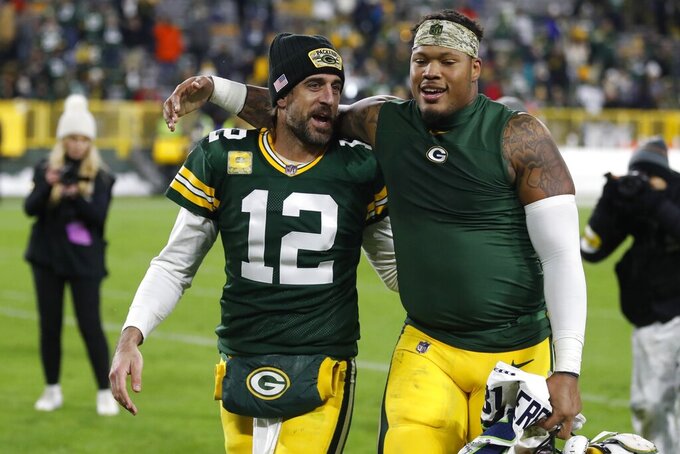 Seattle at Green Bay was never going to live up to the hype, and really how could it? Karma intervenes in pro wrestling all the time, sure, but rarely in the NFL and almost never in the middle of the regular season.

So those who hoped to see Aaron Rodgers laid low for misleading most everyone about his vaccination status will have to bide their time. Ditto for those who hoped he’d emerge from a 10-day quarantine after a positive COVID-19 test like some avenging superhero, proving that Joe Rogan’s hair-of-the-dog-engineered cocktails work as well as anything the Centers for Disease Control puts its stamp of approval on.

As it turned out, Rodgers was barely better than Russell Wilson -- the Seahawks QB was making his own return from a hand injury -- and just good enough to help the Packers post a 17-0 win Sunday.

Unlike his coach and teammates, Rodgers spoke to reporters after the game via video conference instead of in person, apparently so he didn’t have to don a mask.

“I feel pretty good for the most part,” he added a moment later. “I’d say I played fairly solid.”

Rodgers completed 23 of 37 passes for 292 yards, with two touchdowns and an uncharacteristic interception in the end zone. He threw under, over or to the wrong side of receivers a handful of times and even bounced one pass off the helmet of Seattle defensive lineman Bryan Mone.

But “solid” was a fair description for a 37-year-old QB coming back from a layoff and playing in the howling winds, occasional snow and near-freezing temperatures at Lambeau Field. Lucky for him, Wilson was even rustier. If the game proved anything, it’s that the Packers' defense is fast shaping up as a Super Bowl-worthy unit.

“I’m not going to say that we’re a defensive football team just yet,” Rodgers said, “but we’ve definitely been playing like that the last few weeks.”

That development helped pave over a rocky stretch that could have cost the Packers a lot more than the $300,000 fine leveled by the league for violating its COVID-19 protocols, but instead saw them shore up their lead in the division and take over the top spot in the NFC. How long that continues to work, however, depends largely on where Rodgers takes his crusade from here.

He's already been fined $14,650, lost at least one endorsement, and two less-than-satisfying (not to mention unscientific) interviews Rodgers did on Pat McAfee's show did not win him back any fans. His teammates, whether they back his stance or not, wouldn't dare speak out. Coach Matt LaFleur knew what Rodgers meant by “immunized” when he mislead the rest of us back in August, and he's not about to start rocking the boat now.

“You could feel the guys, they were excited to have him back,” LaFleur said. “I felt that (Saturday). I felt that (Sunday). ... Anytime you get a player of that caliber back on your team, I think everybody’s pretty excited.”

Rodgers has already made clear he doesn’t intend to get vaccinated anytime soon, and under the league protocol he can't be forced into a five-day quarantine for “close contact” with someone who tests positive for COVID-19 and won’t even be tested again until two days after the NFC championship game. After that, though, Rodgers will be subjected to daily testing, prompting a question about how he’d feel if his unvaccinated status caused him to miss the Super Bowl.

“I don’t really like playing the what-if game,” Rodgers replied. “What I do know is I have more than two months right now where my protocol is not testing every single day. So that’s kind of the only thing I’m thinking about.

“I don’t like to play the hypothetical game, Rodgers continued. “Obviously, love to be playing second weekend in February, and hopefully we’re in that position.”

There's an easy way to take the “what-if” question out of the equation entirely. It's called a vaccine, and it's readily available within a short drive of the Packers' facility or wherever you happen to be while reading this. It's not just the smart thing, or something you do to help the team, it's good karma, too.