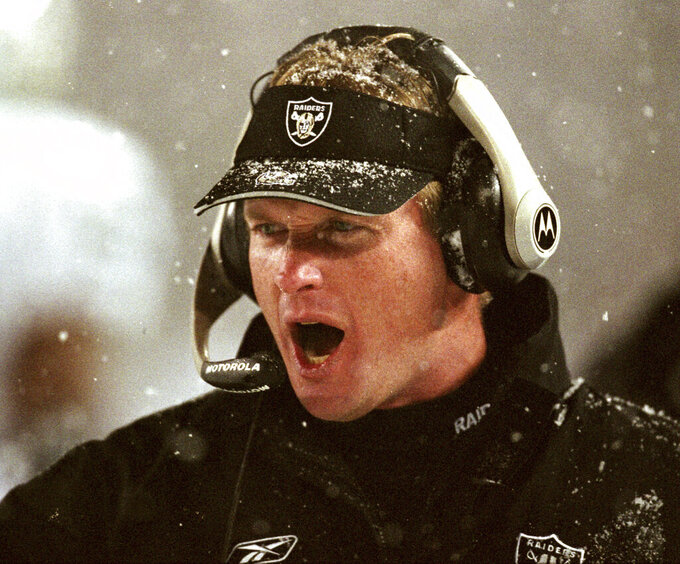 File-Oakland Raiders head coach Jon Gruden shouts instructions during their overtime loss to the New England Patriots in an AFC Divisional playoff game in Foxboro, Mass. Saturday, Jan. 19, 2002. Gruden says opening this season at Carolina and then playing New Orleans on made him feel like he was time warp. His nostalgia is even more amplified this week against New England. It’s been nearly two decades since he walked out of a snow-covered Foxboro Stadium on the wrong end of a 16-13 overtime loss to the Patriots in the infamous “tuck rule” game during the 2001 playoffs. (AP Photo/Winslow Townson, File)

If anything, the renegade Raiders have only ramped up their rabble-rousing ways since moving from Oakland to Las Vegas.

Like so many other bad bets in the neon-splashed desert oasis, the Raiders have lost plenty of Benjamins by flaunting the NFL's COVID-19 protocols over the first month of the season.

Everyone involved with the nation's biggest sports league agreed to follow stringent ground rules so the NFL could pull off a 2020 season during the coronavirus pandemic that's turned life upside down, killed more than 200,000 Americans and reached across society and into the Oval Office.

The Raiders have been fined $575,000 so far for not following the rules.

Jon Gruden is one of five NFL coaches docked $100,000 — and their clubs were fined $250,000 — for improper use of face coverings. Those fines were levied after the coaches ignored the league’s week-old warning in Week 2.

Yet, Gruden hasn’t exactly changed his ways like the other violators, among them Broncos coach Vic Fangio, who ditched his cloth mask for a face shield. Although he's wearing his mask more, Gruden still patrols the sideline with his snarling face uncovered at times.

The Raiders also were fined $50,000 for allowing an unauthorized team employee into their locker room following a game, and on Monday the NFL docked 10 Raiders players a total of $175,000 for appearing at a function where face coverings weren’t used nor social distancing observed.

In a letter sent to the league’s 32 teams and obtained by The Associated Press, Commissioner Roger Goodell on Monday warned of potential forfeits of games and draft picks for further violations of COVID-19 protocols that force changes in the schedule like the ones that mudded the Week 4 slate.

The changes affected the two marquee matchups of the weekend.

The NFL was forced to reschedule Sunday’s game between the Steelers and Titans when Tennessee experienced the league’s first coronavirus outbreak, which has affected 20 organization members, including 10 players. That game was moved to Week 7, causing adjustments that also impacted the Baltimore Ravens.

New England’s game at Kansas City was moved from Sunday to Monday night after Patriots quarterback Cam Newton tested positive for COVID-19, as did a Chiefs practice squad player.

Goodell reiterated the need to adhere fully to all of the league’s health and safety guidelines, saying in his memo to the clubs, “Simply put, compliance is mandatory.”

Not only that, but the league and the players’ association are instituting ramped up health and safety procedures in the wake of the Titans’ outbreak, including bans on gatherings outside the club facility and implementing a league-wide video monitoring system to ensure compliance with the protocols.

Brady and Brees were ho-hum in their season-opening showdown which New Orleans won 34-23. Brady threw for 239 yards and two TDs with two interceptions and three sacks in his Buccaneers debut and Brees beat him despite throwing for just 160 yards.

Brady has won all three of his games since and he’s thrown for eight touchdowns with just one interception, win wins over the Broncos and Chargers the last two weeks.

Rivers was picked off twice in his Colts debut after 16 seasons with the Chargers but he, too, has won three in a row despite a middling four touchdown throws so far.

Brees has eight touchdowns and two interceptions and the Saints are 2-2.

Just behind those mainstays is Ryan Fitzpatrick, 37.

Although the Dolphins are 1-3, Fitzpatrick completed all but two of his 20 passes for 315 yards and two TDs in a 31-13 rout of the Jaguars two weeks ago. He became the first NFL quarterback to notch six wins over the same opponent with six teams

Fitzpatrick, who has played for eight teams in 16 NFL seasons, also has rushed 21 times for 115 yards and a touchdown.

Not a bad start for the greybeards.