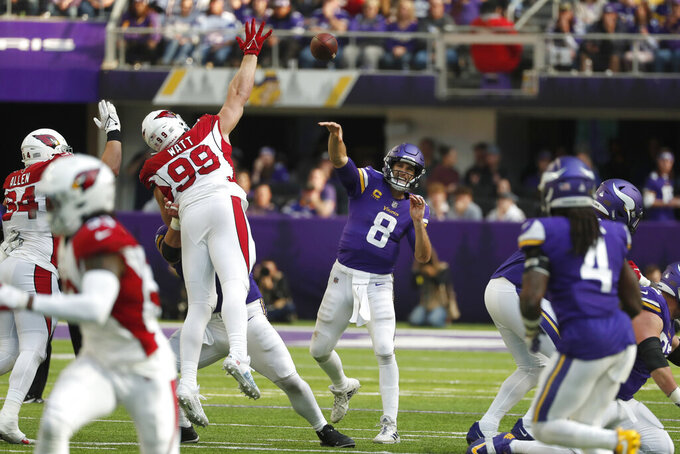 EAGAN, Minn. (AP) — After the Minnesota Vikings hired a head coach with a player-first approach and a quarterback-friendly background, while keeping the entire starting offense intact, the 2022 season was shaping up well for Kirk Cousins.

Questions about whether Cousins would find a higher level of comfort this year, his fifth with the Vikings, have been answered by the NFC North standings.

Recent video evidence from the team plane — of Cousins dancing shirtless with diamond-studded chains draped around his neck, gold wristwatches glistening on his bobbing arms and an ear-to-ear grin — put any lingering doubt to rest.

“It was lit,” rookie cornerback Akayleb Evans said. “Kirk was turning me up. He was turning all us up with all the chains. I just enjoyed that. He’s not afraid of doing that. I like that a lot.”

Calculating, disciplined and studious, Cousins has used those attributes to overachieve along the way as an afterthought recruit at Michigan State and a fourth-round draft pick by Washington.

Those traits can also impede success at times on the field, when it comes to leaning more on confidence and instinct to let the ball rip for, say, Justin Jefferson even if the coverage dictates a pass should go elsewhere. That style also doesn't seamlessly translate to leadership, and Cousins spent much of his first couple of seasons with the Vikings feeling out his place within the team.

Winning makes all the difference, though, especially when supported by a pass-first playbook installed by Kevin O'Connell and a more relaxed environment around team headquarters following the change in coaching staffs.

“I definitely enjoy seeing Kirk enjoying himself like that," O'Connell said. "Because a special part about it is his teammates know what he pours into it each and every week.”

After the Vikings rallied from a 10-point deficit to beat the Commanders on Sunday in the stadium where he first got his start in the NFL, stretching their winning streak to six games, Cousins and his self-deprecating nightclub act became the talk of the league.

He was a guest with the Manning brothers on their Monday night talk show alternative to the standard game broadcast, and his appearance included plenty of discussion about his dance moves and good vibes.

Cousins said Wednesday he never expected the attention — which goes back to Minnesota's win over New Orleans in London on Oct. 2, the first time he tried on a teammate's necklace during the celebratory hangout before the flight home — because of an unofficial rule about no social media posts from the charter plane.

“Once it got out and the train gets down the tracks, it’s hard to stop at that point, as evidenced by me not wearing a shirt last week,” Cousins said.

The first-place Vikings (7-1) face their most daunting road trip yet this week.

They play Sunday at preseason Super Bowl favorite at Buffalo (6-2), having beaten only one team (Miami) that currently has a winning record, so a victory over the Bills would probably trigger another party on the plane afterward feature more moving and grooving by the quarterback.

After the Vikings made the playoffs only once in his first four years with a 33-31-1 regular-season record, their strong start this fall has helped Cousins win over his teammates in ways that never quite materialized from 2018-21.

With a 19-yard touchdown run against Arizona on Oct. 30 that was capped by a headfirst dive into the end zone after outrunning two Cardinals defenders to the sideline, Cousins had center Garrett Bradbury and the rest of the offensive linemen downright giddy with their respect.

“Garrett said it was the greatest thing he has ever seen,” Cousins said with a slight shrug.

During a 47-yard pass to Jefferson against Washington, Cousins took a hard hit that knocked the wind out of him.

“No one ever talks about that," safety Harrison Smith said, ”but this dude’s tough."