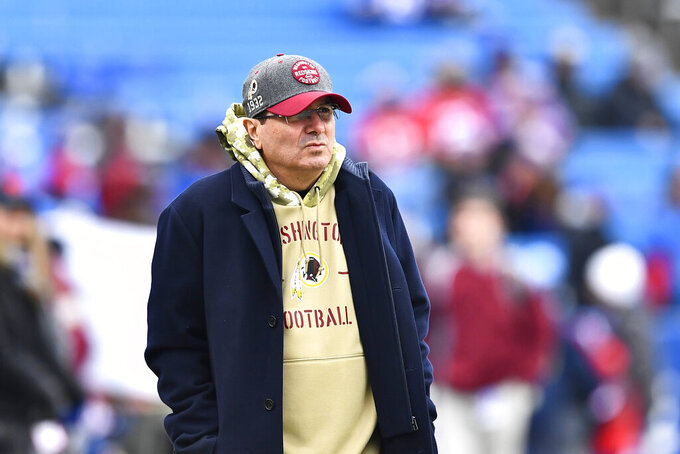 FILE - Washington Football Team owner Daniel Snyder looks on before an NFL football game against the Buffalo Bills, Sunday, Nov. 3, 2019, in Orchard Park, N.Y. Two members of Congress are asking the NFL to provide evidence of Washington Football Team owner Daniel Snyder’s interference with an investigation into sexual harassment and other improper conduct at the club. Democrats Carolyn Maloney of New York and Raja Krishnamoorthi of Illinois already have asked the NFL for transparency about the probe. (AP Photo/Adrian Kraus, File)

WASHINGTON (AP) — Two members of Congress who already asked the NFL for transparency about a probe into sexual harassment and other improper conduct at the Washington Football Team are now asking the league to provide evidence of club owner Daniel Snyder’s interference with the investigation.

This comes after a report posted on The Washington Post’s website said “lawyers and private investigators working on Snyder’s behalf took steps that potential witnesses ... viewed as attempts to interfere with the NFL’s investigation.”

“While Mr. Snyder publicly stated that he wanted independent investigators to ferret out the truth, today’s reporting suggests that he was privately trying to obstruct the efforts of the very investigator he hired in an effort to conceal damaging information,” Maloney said in a news release issued by the Oversight Committee’s majority staff. “These disturbing revelations have only strengthened the Committee’s commitment to uncovering the truth in this matter.”

Krishnamoorthi said: “Snyder will stop at nothing. To get to the bottom of this story, (the) NFL must immediately turn over all evidence of Snyder’s interference and the other documents we requested over a month ago.”

Maloney and Krishnamoorthi sent a letter to NFL Commissioner Roger Goodell on Oct. 21 seeking all documents and communication related to the probe.

On Nov. 5, the pair of representatives urged the NFL and the Washington Football Team to release individuals from non-disclosure agreements that would prevent them from discussing sexual harassment and workplace issues at the club.

The team hired lawyer Beth Wilkinson in 2020 to look into allegations of sexual harassment and other workplace misconduct at the organization.

The league later took over that investigation and fined Washington $10 million in July 2021, saying the culture at the club was “toxic” and ownership and senior officials paid little attention to sexual harassment and other workplace issues.

The NFL said there was no written report of Wilkinson’s inquiry.