For Cousins and winless Vikings, nemesis Seahawks are next 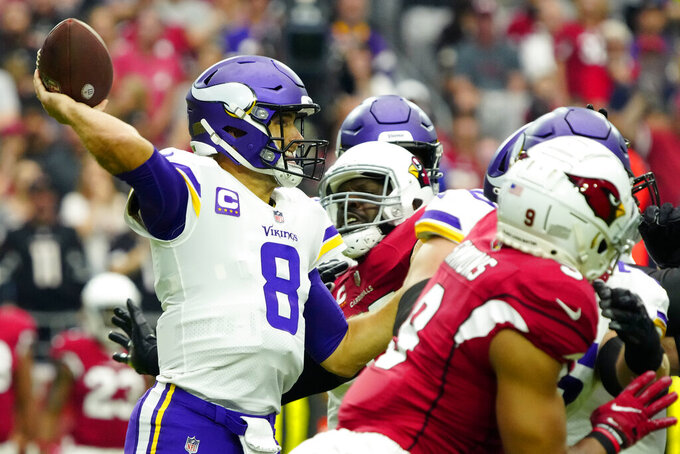 MINNEAPOLIS (AP) — Kirk Cousins moved last week into fourth place on Minnesota's career list for games started by a quarterback, even though it might seem as if he just arrived with the Vikings.

For all the skepticism that has followed Cousins through his NFL career, spiking with each market-rate contract he has signed and increasing again this year in light of his anti-vaccination stance, he has fast become one of the most productive and reliable quarterbacks in the history of a franchise long lacking stability at the sport's most vital position.

He's off to a strong start in his 10th season in the league, his fourth in Minnesota. The problem, of course, is the Vikings (0-2) don't have any victories to show for it after defeats at Cincinnati (27-24) and at Arizona (37-34).

Fair or not to Cousins, or perhaps somewhere in between, displaying that winning touch down the stretch of games in a way that transcends the entire team is still an area with room for growth.

“I think we believe in our locker room and the group we have and what we’re doing, but the results are all that matters, and that’s what we’re measured by,” Cousins said. “So we understand in this league, winning and losing is really what it’s all about.”

This would be the ideal week to take a major stride, when the Vikings host Seattle on Sunday. There's been no bigger nemesis for Cousins and the Vikings than the Seahawks (1-1), who've beaten them in Seattle in each of the past three years.

This season, Minnesota gets to play at home, conveniently in front of an actual crowd after COVID-19 precautions kept the gates closed in 2020.

The Vikings are 0-7 against the Seahawks since Russell Wilson took over at quarterback, entering the NFL the same year as Cousins. They have vastly different styles and developed under vastly different circumstances, and Wilson reached the Super Bowl twice before Cousins even became a full-time starter.

Still, Wilson is precisely the type of peer Cousins needs to be able to match blow for blow in tight games to truly take that next step for his career.

“He’s looked really good. He’s accurate. His arm is strong, and he’s taken off a couple of times to get some yards,” Seahawks coach Pete Carroll said. "I see him as good as I’ve ever seen him. He’s that sharp at the start of the season.”

Zimmer has been impressed, too.

“I think he’s taking real good care of the ball. I think he’s done a good job of getting the ball to the right place. His leadership has been a lot better this year, just the way he’s gone about his business and not just being to himself, but being around the guys more. I think all those things are important," said Zimmer, who told reporters recently he sat down to watch game film with Cousins for the first time in their four seasons together.

For Cousins, who has completed 71.6% of his passes with no turnovers and five touchdowns, the explanation for this progress is simple.

“It's important to be self-aware and understand how you fit. In ’18 I wasn’t going to show up and say, ‘Hey, you guys just went 13-3, I have all these good ideas, listen to me.’ There’s a little bit of, ‘How do I fit into this puzzle?’” Cousins said. “Now that three years have passed, my fourth season, there’s a little bit more ability to have assimilated and understand how this organization works.”

Here are some other key angles to follow for Sunday:

The Seahawks were trampled after halftime last week by Tennessee star Derrick Henry, whose 182 rushing yards matched the most allowed by the Seahawks since Carroll became coach in 2010. They squandered a two-touchdown lead early in the fourth quarter and lost in overtime.

The task will be just as tough with Dalvin Cook and the Vikings, with similarities in blocking schemes and play-calling if not running styles.

“We have to know when they’re going to give him the ball and understand that he’s the guy that gets everything going,” Seahawks linebacker Bobby Wagner said. "Once they establish that run game, it opens up their playbook. Once we stop that, we can stop a big portion of their playbook.”

Seahawks wide receiver Tyler Lockett is one of just six NFL players to have at least one touchdown of 60 yards or more in each of the first two games. He’s the first since Steve Smith in 2007. Lockett could join Randy Moss, Jerry Rice, Marvin Harrison and Dwight Clark as the only players in history with 100-plus receiving yards and a score in three straight games to start a season.

Lockett is second in the league in yards and tied for second in touchdowns. The Vikings are wary, though, of focusing too much on him at the expense of creating opportunities for the dangerous D.K. Metcalf, who had 93 yards and two scores against them in 2020. Metcalf has had a quiet start.

“He’s so prepared to go for it,” Carroll said, “and he’s finding his way.”

Jason Myers has made 36 consecutive field goals, a Seahawks record that's tied for the fourth-longest streak in NFL history. On the other side, the Vikings endured an excruciating miss by Greg Joseph of a 37-yard try on the game's final play that cost them a victory at Arizona. Joseph has made three kicks from 52-plus yards this year, but he also missed an extra point last week.

Cousins and Wilson, who split two meetings in 2011 in Big Ten play between Michigan State and Wisconsin, have faced each other six times in the NFL. Wilson is 5-1, with the lone loss in 2017 when Cousins was with Washington.