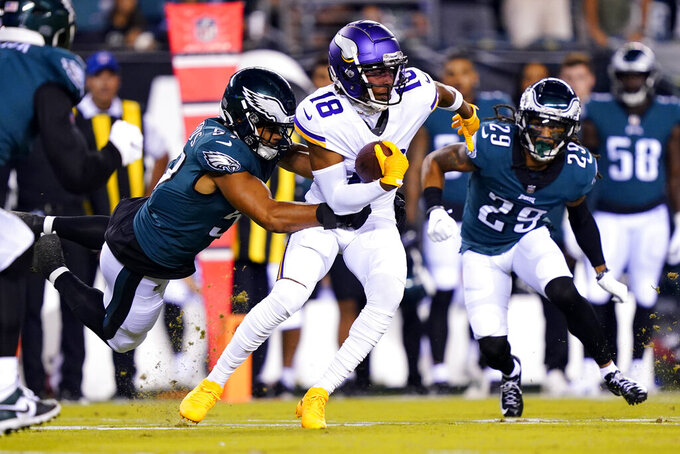 PHILADELPHIA (AP) — Kirk Cousins tried to get the ball to Justin Jefferson.

Darius Slay kept getting in the way.

Cousins was pressured into three interceptions, Jefferson was shut down a week after one of his career-best games, and the Minnesota Vikings were run off the field from the opening drive in a 24-7 loss to the Philadelphia Eagles on Monday night.

“I do feel like this one’s on me,” Vikings coach Kevin O’Connell said.

There was plenty of blame to go around for the Vikings, who hoped a sharp opening performance in a win against Green Bay was the catapult for gutting out a tough one in Philly.

But again, the Vikings left the city losers, just as they did in January 2018 after the NFC championship game.

“We wanted to come into this game and just dominate, especially after last week’s performance,” Jefferson said. “But we definitely had plenty of opportunities to score the ball and make something happen, carry the momentum to our side. We didn’t execute on the offensive side.”

The game was billed as a showdown between two of the top receivers in the league, Philadelphia’s A.J. Brown on one side against Jefferson on the other. And with good reason. Jefferson went wild against the Packers with 184 receiving yards and two TDs. He had a franchise-record 158 receiving yards in the first half.

Cousins tried to keep his top target involved -- and the Vikings did throw the ball plenty after Jalen Hurts was a virtual one-man show for the Eagles in the first half (try 301 total yards).

While Hurts had made the game seem out of reach with each dazzling run or quick-strike pass, the Vikings hung around and had chances in the second half. All of them, wasted.

“I’ve got to be flatter if Slay’s going to sit on that type of route. I’ve got to come flatter and be in front of him instead of going behind him,” Jefferson said. “So, that one’s on me.”

Cousins’ third pick came on a lob that Slay snagged again and sealed the win.

“He’s a competitor for sure. I knew that I was going to get that from him,” Jefferson said. “I mean, he’s a great cornerback. He’s a great player. A great guy, too. We definitely could’ve had some more opportunities out there to score and put up points, and we just didn’t.”

Cousins was 27 for 46 for 221 yards and one touchdown. Jefferson had six receptions for 48 yards. Even worse, Cousins was the leading rusher with 20 yards.

Cousins’ lone TD pass was a 2-yard score to Irv Smith in the second quarter that made it 14-7. With the game not quite out of reach late in the first half, Cousins threw a strike to a wide-open Smith that was dropped. Smith was alone and likely could have walked in with the touchdown.

“Just one play away,” O’Connell said.

Up next, a game against the 1-1 Lions in an opportunity for the Vikings to show if the opening-week win was an early-season fluke or if the dreary effort against the Eagles is something that will linger.

“Everybody in this room definitely could’ve done something better to change the outcome of the game,” Jefferson said. “We’ve still got to look at the film. It’s a short turnaround, so tomorrow we’ll look at it and move on to Detroit.”