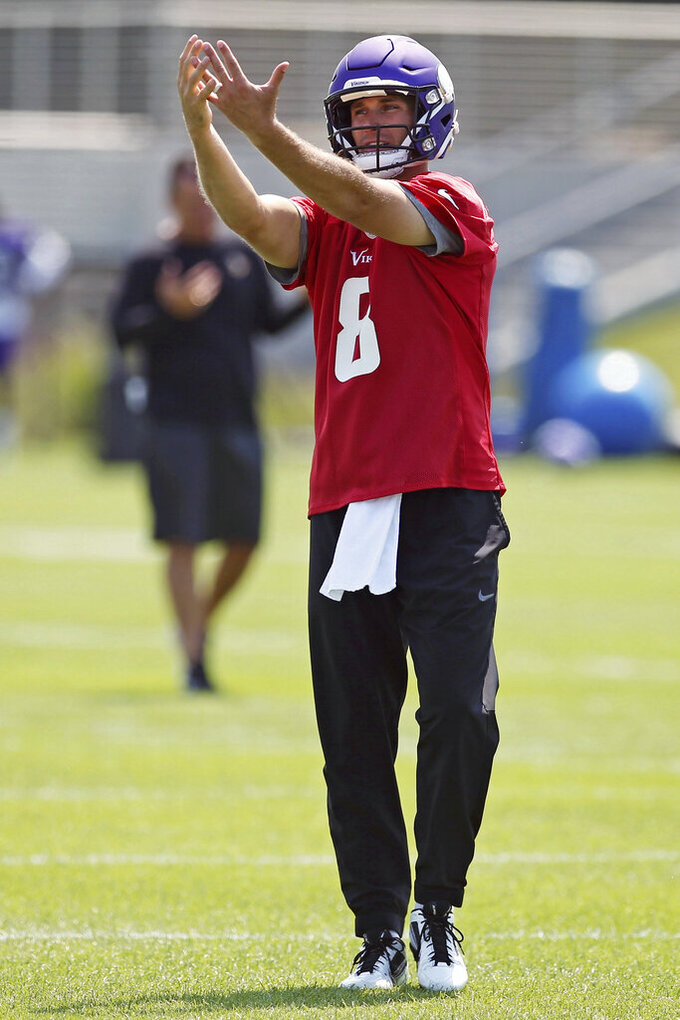 EAGAN, Minn. (AP) — Kirk Cousins is well aware of the label on an NFL career left largely unfulfilled, a quarterback with plenty of impressive stats but not enough team success.

The scrutiny intensified with the fully guaranteed $84 million contract that Cousins signed with the Minnesota Vikings last year, a season that ultimately ended for him like all the others in disappointment without a playoff win.

This year, Cousins is determined to change that perception.

"It's going to come down to those 16 regular-season games and then beyond that. Unfortunately, you grind in training camp and you get to Labor Day weekend and you look around and you're like, 'All that work, and I've got nothing to show for it yet,'" Cousins said Wednesday.

"Hopefully you're laying a good foundation and hopefully it shows on Sundays in the fall, but the nature of this next month and a half, whether it's really good or really bad, it really isn't what the narrative becomes on you. You have to translate that into a very good season."

His first year with the Vikings was eerily similar to his time with Washington. Though he has passed for at least 4,000 yards and 25 touchdowns in four straight seasons and been regularly among the NFL leaders in completion rate, including a career-best mark (70.1 last year that ranked second in the league, Cousins is just 34-37-2 as a starter. He lost his only playoff game start in 2015.

The offseason priority for the front office in Minnesota, thus, was to make Cousins more comfortable. He has, in turn, tried to do his part to take that critical step forward in 2019 and carry a team with Super Bowl aspirations along with him.

"I'm pretty much a .500 quarterback in my career so far, and I don't think that's where you want to be," Cousins said recently. "That's not why you're brought in or people are excited about you. If I don't play well, if I don't have gaudy statistics, but we win multiple playoff games this year, the narrative will be I went to the next level. I may not walk off the field every day feeling like I did, but if we win, that's the life of the quarterback, you are then at the next level. If I have my best year yet in 2019 but we're 8-8, I didn't go to the next level."

Cousins is again partaking in the first three days of training camp, which is for rookies and other inexperienced players. The other veterans don't need to take the field until Friday.

"I think one thing that I can do beyond just playing the best I can is to start really coaching and leading other people so that I can never walk off the field saying, 'Hey, I did my part but so and so didn't,'" Cousins said. "That can't happen as an NFL quarterback. You have to be bringing others along so that isn't a point you're making at the end of a practice or a game."

In front of Cousins, the offensive line was reworked with first-round draft pick Garrett Bradbury at center, Pat Elflein moving from center to left guard and Josh Kline signing as a free agent to be the right guard.

Time can also be a benefit.

"His comfort level, him understanding what's being asked of him to do," general manager Rick Spielman said. "They will do things to make sure that he is comfortable in the offense, that will fit his strengths as a quarterback. You can have all the gaudy stats in the world, but this business is always going to come down to wins and losses."

No need to tell Cousins that.