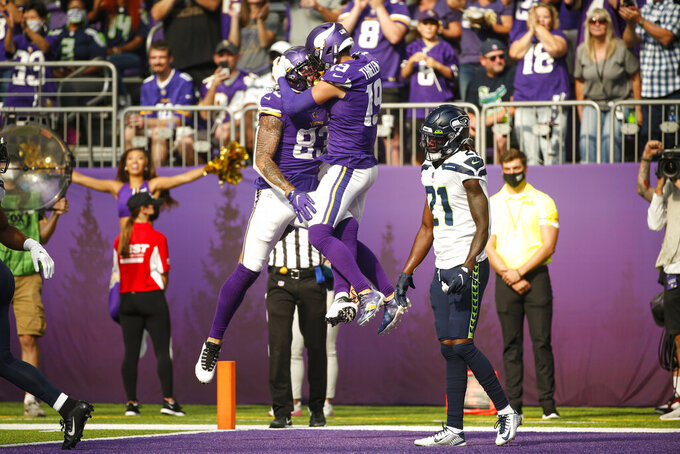 Minnesota Vikings tight end Tyler Conklin (83) celebrates with wide receiver Adam Thielen (19) after scoring a touchdown against the Seattle Seahawks in the first half of an NFL football game in Minneapolis, Sunday, Sept. 26, 2021. (AP Photo/Bruce Kluckhohn)

EAGAN, Minn. (AP) — Kirk Cousins took the shotgun snap and had the Seattle Seahawks’ pass rush immediately closing in. The Minnesota quarterback lofted a pass into the middle of the field while backpedaling, a potentially scary situation for a team nursing a 10-point lead and looking to win its first game of the year.

On the other end of the pass, though, was second-year receiver K.J. Osborn coming across the middle to convert an important third down. Running back Alexander Mattison, filling in for the injured Dalvin Cook rushed for 112 yards, including 76 yards in the second half to help salt away Minnesota’s 30-17 victory.

With fill-ins playing vital roles, the Vikings’ offense is humming with Cousins as the distributor and first-year coordinator Klint Kubiak at the controls.

“There’s so many guys that can come in and contribute, and that’s what Kirk is good at,” receiver Adam Thielen said. “He’s good at distributing the ball, finding the open guy. He doesn’t care who it is. He’s going to trust you.”

Minnesota is fourth in the league in total offense, averaging 425 yards per game. It’s seventh in scoring at 29 points per game.

Cook is still a big piece, missing his first game of the season on Sunday due to an ankle injury, and Cousins still has Thielen and Justin Jefferson as his top targets. But the Vikings have found balance early this season with production from a few surprise contributors.

Osborn has taken advantage of his chances, particularly on third downs. His two catches Sunday each converted third downs. Osborn has become Cousins’ third-most frequent target with tight end Irv Smith Jr. out for the season after knee surgery.

Tyler Conklin, the immediate fill-in for Smith, had career highs with seven catches for 70 yards and his second career touchdown on Sunday.

A big part in the offensive production and Cousins’ fast start has been the play of the offensive line. Cousins was sacked just once Sunday and he repeatedly had time to survey the field and find open receivers.

The line had a tough Week 1 with penalties and Cousins was sacked three times by the Bengals. He’s been sacked just twice the past two weeks.

Minnesota’s defense, at its best, has typically tightened up when opponents get to the red zone. The Vikings were second or third in the league in red-zone defense from 2017-19 before dropping to 11th last season.

This year, Minnesota has allowed opponents to score touchdowns six of the eight times they’ve reached the red zone. The 75% scoring rate is 27th in the NFL. Seattle scored on its only red-zone possession on Sunday.

Conklin entered this season with 32 receptions for 329 yards and one touchdown through three NFL seasons. His 2021 role wasn’t likely to grow much with Smith expected to take a step forward as a receiving option.

With Smith out, Conklin has become a reliable target for Cousins. He has 13 receptions on 16 targets for 126 yards and is coming off his best game as a pro.

“There’s not too many great ones to compete with at this moment,” Conklin joked when asked to rank his game Sunday among his career best. “But we’re going to keep stacking them and make some great ones, so that’s all that matters.”

A revamped secondary with three new starters is still trying to find its way. Russell Wilson and the Seahawks averaged 9.33 yards per play in the first half, with 218 of the 308 yards coming through the air.

Cook’s status will be watched closely, though Mattison has proven to be a capable fill-in. Cook missed practice all last week with his ankle injury. Linebacker Anthony Barr (knee), who hasn’t played yet this season, returned to limited participation in practice last week.

100 — Jefferson became the fastest Viking to reach 100 career receptions on Sunday. Jefferson achieved the feat in his 19th career game, surpassing Stefon Diggs and Jermaine Wiggins, who did it in 20 games.

Former offensive coordinator Kevin Stefanski returns to Minnesota as the head coach of the Cleveland Browns. Stefanski, who spent 14 years in various roles with the Vikings, has Cleveland 2-1 this season after a 26-6 win over Chicago. The Browns are 13-6 under Stefanski, last year’s NFL Coach of the Year.