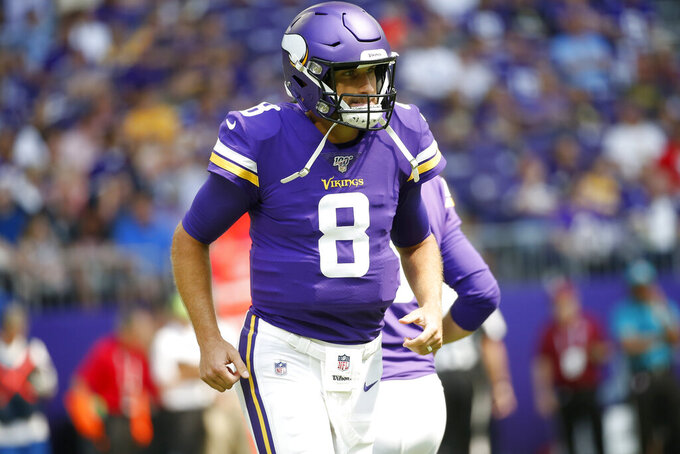 Minnesota Vikings quarterback Kirk Cousins runs off the field during the first half of an NFL preseason football game against the Arizona Cardinals, Saturday, Aug. 24, 2019, in Minneapolis. (AP Photo/Bruce Kluckhohn)

EAGAN, Minn. (AP) — After signing Kirk Cousins to a fully guaranteed contract last year, the Minnesota Vikings might have given their quarterback even more to work with this time.

This season will surely be a crossroad of sorts for both Cousins and the Vikings, their trajectory toward — or away from — that elusive Super Bowl victory inescapably intertwined.

"I'm pretty much a .500 quarterback in my career so far, and I don't think that's where you want to be," Cousins said this summer, his most pronounced acknowledgement that his debut in purple did not quite pan out as he or the team hoped with an 8-7-1 record that missed the cut for the playoffs.

On the statistical surface, and by the eye test for stretches of the schedule, Cousins largely excelled. His 70.1 percent completion rate was the 10th-best in NFL history. He topped 4,000 passing yards for the fourth straight year, producing the fourth-highest total in the league during that span. His interception rate of 1.7 percent was the best of his career.

When the Vikings lost the finale to the Bears, thus keeping them out of the playoffs, Cousins averaged 4 yards per attempt, his lowest of the year.

The offense had several weaknesses beyond his control, but his performance in the first edition of the $84 million deal wasn't strong enough to cover them up, either.

So the Vikings set out to make Cousins more successful this season, hiring former NFL head coach Gary Kubiak as an adviser after appointing Kevin Stefanski as offensive coordinator.

New offensive line coach Rick Dennison, a longtime companion of Kubiak, was also handed the title of running game coordinator to help boost a critical area that failed to take the pressure, literally and figuratively, off Cousins last year. Center Garrett Bradbury and tight end Irv Smith Jr. were their first two draft picks. Even wide receiver Josh Doctson, a familiar target for Cousins from their time together with Washington, was added this week.

"If we have a really good year, but I don't play very well, does that mean I crossed the road and we're good? If I have my best year I've ever had and we don't win, does that mean that I'm not good? I don't know. I just think that winning does kind of tell the story, and if we win the rest tends to take care of itself," Cousins said Wednesday. "I need to play well regardless, win or lose, and I've got to earn my way every day. I'm being evaluated like everyone else, and if I don't play well, win or lose, I'm not going to be here."

The offense will put Cousins under center more often than the shotgun formation he frequently operated out of last season. Play-action passes will be a favorite, using a skill Cousins has long held. The arrival of Kubiak raised a too-many-cooks concern, but Cousins has expressed appreciation for the variety of perspectives the coaching staff can provide him. Cousins has also taken a more collaborative approach with the offense toward the implementation and digestion of the what, why and how of the new playbook.

"He's more about trying to help guys out and do his job, get the guys around him in the huddle on the right page, and go from there," coach Mike Zimmer said.

There's another change for Cousins this year, a beard he began growing at the beginning of training camp after a casual suggestion by Bradbury. Cousins said he's curious to see if his facial hair can match the thickness sported by new right guard Josh Kline.

Beneath the offseason enhancements, the Vikings still have at their core a wide receiver tandem in Adam Thielen and Stefon Diggs that is one of the NFL's best. They're eager, too, to see what more Cousins can do in the revamped system. Diggs, though, made clear Wednesday that Cousins doesn't need to further prove himself.