Cousins, Vikings will again have plenty of skill on offense 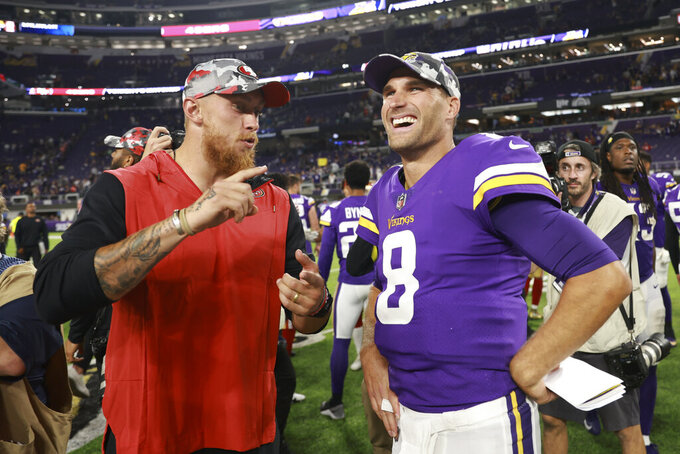 Strengths: With WRs Justin Jefferson, Adam Thielen and K.J. Osborn to throw to and RB Dalvin Cook anchoring the backfield, QB Kirk Cousins will again have plenty of skill by his side. Smith and a healthy Danielle Hunter will make a formidable duo of edge rushers at OLB.

Weaknesses: After 12th-year veteran Patrick Peterson, the CB group is again unproven with Cameron Dantzler and Booth in the mix at the other starting spot in the base defense and Sullivan slotted as the nickel back. The interior OL remains a question mark, with C Garrett Bradbury in a contract year and the rookie Ingram on track to take over at RG.

Camp Development: Defensive leader Eric Kendricks quickly formed a strong bond with Hicks at LB, where Barr had played next to him for the past seven seasons. K Greg Joseph built off a decent 2021 season with a strong performance during open-to-the-public practices.

Fantasy Player to Watch: TE Irv Smith Jr. The third-year player missed most of training camp recovering from thumb surgery, after missing the 2021 season with a knee injury, but his speed and athleticism ought to give Cousins another viable option for the passing attack — particularly on third downs and inside the 20.

Expectations: The pressure on a first-year coach in O’Connell will be relatively low, but the Vikings eschewed a rebuild at what would have been a natural time to reset the roster under new GM Kwesi Adofo-Mensah and kept Cousins for at least another year or two. By firing Zimmer and GM Rick Spielman and bringing back the same core of stars and leaders that missed the playoffs each of the past two years, the Vikings have put the onus on O’Connell and his staff to get more out of the roster than his predecessor did.