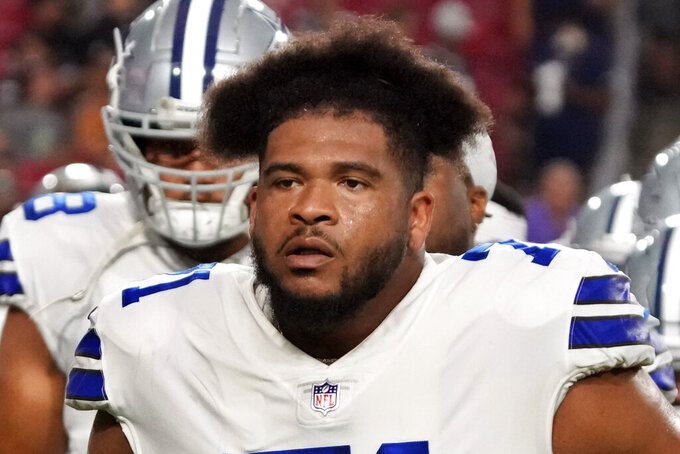 FILE - In this Aug. 13, 2021, file photo, Dallas Cowboys offensive tackle La'el Collins (71) walks off the field during a preseason NFL football game against the Arizona Cardinals in Glendale, Ariz. Collins has been suspended without pay for the next five games for violating the NFL Policy on Substances of Abuse, the NFL announced Friday, Sept. 10, 2021. (AP Photo/Rick Scuteri, File)

The suspension came a day after Collins played his first game since 2019 in the Cowboys' opener, a 31-29 loss to defending Super Bowl champion Tampa Bay. Collins missed all of 2020 because of a hip issue that required surgery.

Collins won't be eligible until Week 8 against Minnesota, after Dallas' open week. The absence means the Cowboys will go at least 22 consecutive games without their top three linemen playing together.

Four-time All-Pro right guard Zack Martin, who played a career-low 10 games last year because of a calf injury, missed the opener after testing positive for COVID-19 five days before the game.

Dak Prescott threw for 402 yards and three touchdowns against the Buccaneers in his first game in 11 months after last season's gruesome ankle injury. But the Cowboys struggled to establish the run against Tampa, and will have another challenge without Collins.

Terence Steele played the most games in Collins' spot last season as a rookie, but the Cowboys also moved Martin to right tackle for a brief stint. Brandon Knight, who is on the COVID-19 reserve list with Martin, got most of the work at left tackle last year.

Collins was expected to be a high draft pick in 2015 out of LSU but wasn't selected after his name surfaced in the investigation of a woman's death. He was soon cleared and signed with the Cowboys as a free agent. Collins is on his third contract with the Cowboys.