Cowboys' focus on defensive line could persist through draft 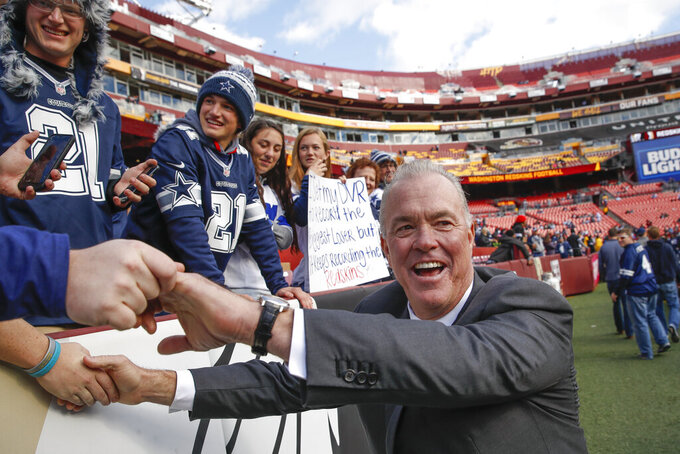 FRISCO, Texas (AP) — The Dallas Cowboys made DeMarcus Lawrence the highest-paid player in franchise history and gave him a pass-rushing partner on the other side in a trade for Robert Quinn.

Even after the two biggest offseason moves for owner/general manager Jerry Jones and company, defensive line remains a high priority in the draft.

The Cowboys probably won't pick until the second round Friday after trading their first-round choice to Oakland for receiver Amari Cooper last season.

"We think it's probably the deepest position in this draft," said executive vice president of personnel Stephen Jones, Jerry's oldest son. "We think it's deeper than it's been in many years."

Coming off their second NFC East title and first playoff win in three seasons with the star pairing of quarterback Dak Prescott and running back Ezekiel Elliott, the Cowboys have the 58th overall pick in the second round.

The signing of Lawrence to a $105 million, five-year contract after a second consecutive Pro Bowl season answered the most pressing question for Dallas going into the draft. At $21 million per year, the deal surpasses retired quarterback Tony Romo and other big-name predecessors. It also gives the Cowboys a feeling of freedom.

"That's our goal every offseason is to accomplish that and not feel like, 'Hey we've got to take a certain position with the first pick or this second pick or we've got to address this position at least by the second or third round,'" Stephen Jones said. "It's nice not to be able to do that, and I think that's why we've had success in the draft."

Before the addition of Quinn, the two best pass rushers on the Dallas roster were second-rounders.

One was early in the second with Lawrence, the first defensive end taken by the Cowboys after they released franchise sacks leader DeMarcus Ware in 2014. The other was late in the second in Randy Gregory, drafted in 2015 after he slid out of the first round because of off-field concerns.

Gregory is suspended indefinitely, his fourth ban for substance-abuse violations, and 2017 first-rounder Taco Charlton has not progressed as hoped. Because of that, the Cowboys won't rule out taking another pass rusher with their first pick.

But it wouldn't be a shock if Dallas drafted an interior defensive lineman before the third round for the first time since taking Russell Maryland No. 1 overall in 1991.

Defensive coordinator Rod Marinelli believes in making productive tackles out of lower-round picks. But if Dallas breaks that mold, Miami's Gerald Willis could be among the prospects.

Safety is also a popular choice in mock drafts.

The return of Jason Witten makes tight end one of the more intriguing topics. The 11-time Pro Bowler is poised to set the club record with his 16th season after deciding to come back following a one-year retirement to be the lead analyst for ESPN's "Monday Night Football."

Witten, who signed a one-year deal worth up to $5 million, will be 37 and supposedly won't take virtually every snap the way he did for 15 years. But even Jerry Jones admits he'll have to see that to believe it.

The Cowboys drafted Dalton Schultz in the fourth round last year, and 24-year-old Blake Jarwin tied a club record for a tight end with three touchdown catches in the regular-season finale, a 36-35 win over the New York Giants. Dallas likes both, but still might be looking for its next two-way standout at tight end.

Dallas never got serious in the bidding for free agent Earl Thomas (the three-time All-Pro went to Baltimore) and settled for inexpensive and steady seven-year veteran George Iloka. There's little question safety tops the list of positions needing a young potential star for the Cowboys.

The most recent time they drafted a safety higher than the third round was Roy Williams, a 2002 first-rounder. Byron Jones, a late first-round pick in 2015, played safety early in his career after getting drafted as a cornerback.

It seems crazy to consider running back a position of need for a team with a starter who will be 24 and already has two rushing titles in three seasons (Elliott).

But seldom-used Rod Smith hasn't re-signed, and the Cowboys would be intrigued if one of the draft's better backs were available late in the second round.

"We can't and I don't expect to have a substitute for Zeke," Jerry Jones said. "But someone that can do what Zeke does, which is not necessarily a change-of-pace guy, is the preference for me."