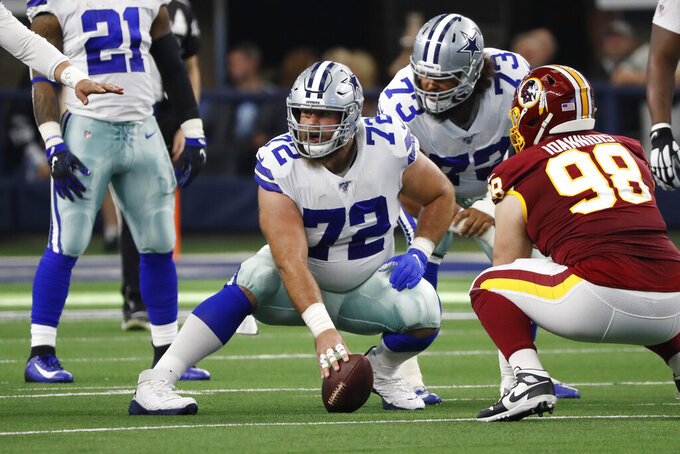 In this Dec. 15, 2019, photo, Dallas Cowboys center Travis Frederick (72) plays in the first half of an NFL football game against the Washington Redskins in Arlington, Texas. Frederick is retiring from the NFL at 29. The surprising decision comes less than two years after Frederick was diagnosed with a neurological disorder that sidelined him for all of 2018. (AP Photo/Roger Steinman)

Travis Frederick said he thought he played well at center for the Dallas Cowboys after returning from a nerve disorder that sidelined him for an entire season.

The 2016 All-Pro made it clear Monday it wasn't good enough.

Frederick retired from the NFL at 29, saying he “could no longer perform at my highest level” even though he went to his fifth Pro Bowl in his only season after recovering from Guillian-Barre syndrome.

“Each day, I faced a struggle: I could no longer perform at my highest level,” Frederick wrote in a long statement posted on Twitter and released by the team. “Playing ‘well’ is not what I expect of myself and not what my teammates deserve. Because of this, I know my days as a football player are done."

A first-round pick seven years ago, Frederick missed all of 2018 after getting diagnosed with the auto-immune disease during training camp.

According to the National Institute for Neurological Disorders and Stroke, Guillain-Barre causes the body to attack a network of nerves around the brain and spinal cord. Most people recover from even the most severe cases, which can include temporary paralysis, but some will continue to have some degree of weakness, according to the institute.

Frederick was asked frequently how he was feeling and how he thought he was playing during a season that started with high expectations for the Cowboys but ended without a trip to the playoffs. The former Wisconsin player's answers were always upbeat, including during his final session with reporters after the season ended.

The final answer was something different, and leaves a big void in the middle of the offensive line. The Cowboys have invested heavily there with draft picks and subsequent contracts for a decade.

Frederick was among three first-round choices in a span of four years, and all of them signed lucrative second deals. Right guard Zack Martin has made the Pro Bowl in all six of his seasons, and left tackle Tyron Smith is a seven-time Pro Bowler.

There are four years remaining on the $55 million extension Frederick signed during the preseason in 2016.

“His leadership ability, production and intelligence put him at the top level of interior offensive linemen in our league for many years,” Cowboys owner Jerry Jones said.

“At the pinnacle of his success, his career on the field was only exceeded by a rare display of courage and determination in overcoming a life-threatening illness and returning to the game — a challenge that could only be completed by a person with rare levels of perseverance and strength.”

Frederick is married with two young children and said the Guillian-Barre diagnosis caused him to rethink his priorities.

Frederick hadn't missed a game in his first five NFL seasons when he took time away from training camp in California in 2018 because of feelings he said were similar to stingers in his neck and shoulders.

When he returned to camp, Frederick told reporters he checked out OK with doctors in California. Not long after, Frederick saw more doctors in the Dallas area, and received the diagnosis.

Frederick said the year not playing forced him to consider life after football. He said he knew how players feared the moment when they could no longer do something that had consumed them for 20 years.

“After months of contemplation, I not only accepted that moment, but I also, surprisingly, found myself welcoming the moment,” Frederick said. “I was ready for the next stage of my life. However, the competitor in me would not accept going out without returning to the field.”

Veteran Joe Looney started all 16 games and two playoff games in Frederick's place two years ago and recently re-signed with the Cowboys.

Connor McGovern, a third-round pick last year who missed the season with a pectoral injury, played center as a sophomore at Penn State before playing all but one game at guard during his final season as a junior.