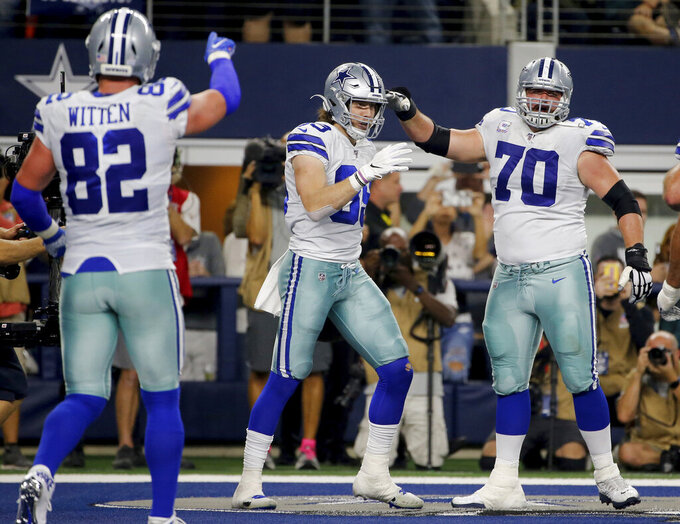 EAST RUTHERFORD, N.J. (AP) — Jason Witten is returning to "Monday Night Football" in his more accustomed role as the Dallas Cowboys' tight end and not a television analyst for the ESPN production.

The 37-year-old will not be wearing a microphone during the network's prime-time coverage of the matchup between the Cowboys (4-3) and the fading New York Giants, who are 2-6 and riding a four-game losing streak.

Witten didn't know if ESPN asked to have him miked for the game but wanted no part of it. He said he has done it before and he didn't like it. The mike felt strange over his shoulder pads one time and the other time he played poorly.

So no more. It's back football, and only football.

Witten's focus this week is to help the Cowboys build off their big win over the Eagles two weeks ago. A bye week followed the victory, which put them back in first place in the NFC East after three straight losses. Seeing former ESPN co-workers Joe Tessitore, Booger McFarland and Lisa Salters will be fun, but he is also trying to keep his emotional level in check.

"It was a good time in my life. It really was," Witten said of his television work in 2018. "I enjoyed every moment of it, working with those guys, but I'm also very appreciative of being right where I'm at. This is what I wanted to do. I had an opportunity to play. It's a good group of guys. I'm amazed at how hard they work and how talented they are, but I'm right where I need to be."

Giants veteran defensive back Michael Thomas laughed when asked if Witten had lost anything working a season in the television booth, noting Witten beat him for a touchdown in the Cowboys' 35-17 win in the season opener.

"There are a lot of offensive players who are retired that are coming back, saying they can play in this league and I don't think that is by coincidence," Thomas said. "The way this game is right now, there's a lot of players who think: 'I got maybe three, four, five more years.'"

Witten knew he still could play in the NFL when he retired after the 2017 season. However, ESPN offered him a unique opportunity to work on the same broadcast that once employed Don Meredith, Frank Gifford, Dan Dierdorf and John Madden.

After a year, the urge to play moved him back into the game.

"I don't have any regrets because I think I'm better because of that experience," Witten said. "But I do think there were moments throughout that I thought, something inside of me was just like, 'I should still be playing football. I have more to give. I have more to give.' Maybe that opportunity forced my hand. If I could go back, I would say just trust your instincts of, 'You'll get other opportunities. You'll have things."

Witten has played well this season. He has 26 catches for 263 yards and two touchdowns. His reception total is third on the team, and the TD catches are tied for second.

McFarland is looking forward to seeing Witten in the production meeting and commenting on a game that will have someone whom he considers a friend playing.

"It's going to be fun," McFarland said. "We talked a lot of the game while we were preparing for 'Monday Night Football.' I'm definitely prepared to see him try to block some of these defensive ends and then when he gets out there on the pass route, I am just going to see how the old body is moving."

McFarland quipped criticizing Witten would not be a problem.

Witten has had some huge games against the Giants. He had a club-record 18 catches against New York in 2012, an NFL single-game high for a tight end and tied for third overall in league history. He is the Cowboys' career leader in receptions (1,174) and receiving yards (12,678) and is playing in his team-record 16th season.

"You have to look at the type of player he is," Engram said. "He has never been that speedy, explosive, athletic guy. He has always that big body, knows how to use his body and find zones and how to get open."

Witten isn't thinking beyond this season.

"One thing I told myself when I made this decision, kind of telling you the first time, if I did regret it, when I go back in, I want to stay right here," he said. "Don't worry about what's next. I think a lot of people say that in their lives. It's harder to do that and really live it out."