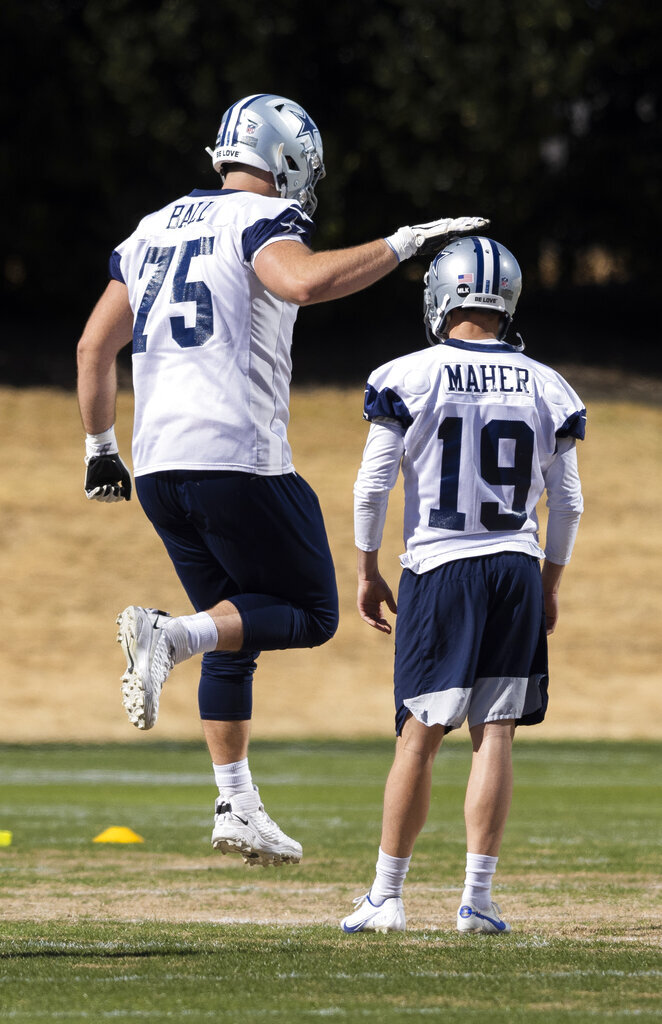 The beleaguered kicker who made NFL history — regular season or playoffs — by missing his first four extra points in a wild-card victory over Tampa Bay must be heeding star running back Ezekiel Elliott's advice.

“That’s our brother. We’re not going to turn our back on him,” Elliott said after practice. “Last week, we didn’t really need him. But this week we probably will. So get that (stuff) together.”

Hey, the Cowboys are in a good mood after ending an eight-game road playoff losing streak with the 31-14 victory over Tom Brady and the Buccaneers.

Now it's on to the six-game losing streak in the divisional round — the longest skid since the 1970 merger — when Dallas (13-5) visits San Francisco (14-4) on Sunday night.

Maher took a big step toward being the kicker against the 49ers based on what reporters saw in gusty winds at practice.

Tristan Vizcaino followed with two misses in five attempts a day after the Cowboys signed him to the practice squad in case the yips continued for Maher.

Yes, special teams coach John Fassel believes in the yips — just as much as he believes in sticking with Maher despite the bizarre meltdown.

“I believe in a hot hand and I believe in the yips,” Fassel said Tuesday, the day after Maher's historic misses.

Well, it was a bit more dramatic than that, just from the looks on the faces of Maher, Fassel and plenty of others on the Dallas sideline when a 24-0 lead was supposed to be 28-0.

Not to mention quarterback Dak Prescott sprinkling in some expletives while wondering why the Cowboys weren't trying 2-point conversions instead.

Prescott calmed down enough Monday night to try to lift up his kicker, and was even more supportive with several more days to think about it.

“I’m a ‘Money Maher’ fan,” Prescott said. “I haven’t lost any confidence nor am I going to force my game or do anything outside my box because of uncharacteristic misses by him. I think he’ll get back to himself this week as he has done here at practice, and I trust that guy all the way through.”

Maher, who didn't appear in the locker room when it was open to reporters Thursday, was money almost all season after saving the Cowboys from themselves when a kicking competition in training camp went awry.

The 33-year-old with four seasons of NFL experience went 29 of 32 on field goals, a 91% conversion rate that ranked in the top 10 in the league.

Two of the misses were from 59 yards, and Maher connected on a 60-yarder against Minnesota to extend his NFL career record to four kicks of at least 60. Maher made that one twice after officials stopped play for a review as the ball was being snapped on the first attempt.

“He sunk it twice in a row,” rookie left tackle Tyler Smith said. “That Bengals game, to win the game (20-17 on the final play in Week 2). That was a long field goal. He sunk it. He knows he’s very capable. We know he’s very capable.”

The addition of Vizcaino gives the Cowboys the flexibility to make a change as late as Saturday. It wasn't trending that way Thursday.

“It doesn’t take anything away from our trust in Brett,” coach Mike McCarthy said of adding Vizcaino. “I just think it’s part of the responsibility. This is nothing out of the norm for us.”

All eyes on routine kicks in practice was a bit out of the norm.