Cowboys leaning more on D without Prescott as Eagles loom 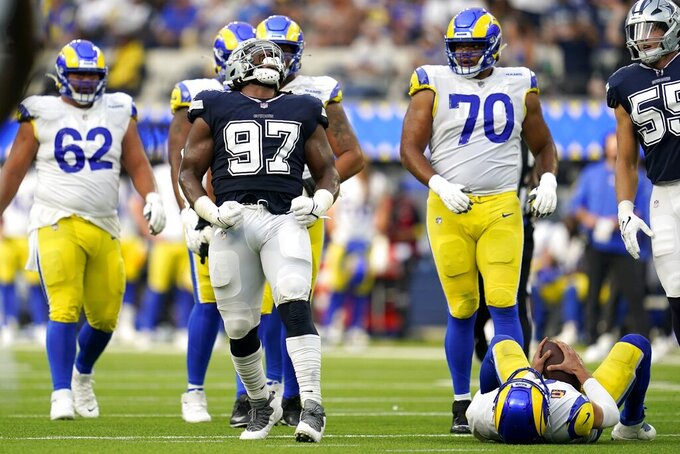 Now the Cowboys have to slow Jalen Hurts and the undefeated Philadelphia Eagles in an early NFC East showdown, with Prescott's return creeping ever so closer.

It's too early to tell if the star QB's recovery from a fractured right thumb will be far enough along by Sunday night at the Eagles (5-0).

Meantime, the defense is harkening to the franchise's “Doomsday” teams of the 1970s — and posting numbers not since seen since the birth of that era 50 years ago.

“We’re for real,” reigning NFL Defensive Rookie of the Year Micah Parsons said. “We’re going to keep proving this every week. One thing I’ve learned about us is that we’re tougher and we’re better than we thought we were. That says a lot.”

Rush threw for the fewest yards in the 5-0 start to his career with 102 in a 22-10 victory over the defending Super Bowl champion Los Angeles Rams.

That's because Dallas (4-1) scored on a sack-fumble of Matthew Stafford three plays into the game, then sealed the victory with two fourth-quarter turnovers — an interception and another strip-sack.

Give the running game some credit, too. Tony Pollard had a 57-yard touchdown and the Cowboys finished with 163 yards rushing a week after having just 62.

Rush's 4-0 run started with touchdowns on his first two drives against last season's other Super Bowl team, Cincinnati. The defense did most of the rest before a game-ending field goal in a 20-17 victory.

Another fourth-quarter drive to the winning points followed in a 23-16 victory at the New York Giants before the Cowboys were outgained in a 25-10 win over Washington.

This time, Dallas finished with 76 net yards passing, the club's fewest in a road victory since 1975.

And that defense Parsons believes is the best in the NFL? The Cowboys have allowed one touchdown in each game. The only other time Dallas gave up five or fewer touchdowns in the first five games was 1972.

“They’ve been doing this for quite some time,” coach Mike McCarthy said. “Just tremendous confidence and communication. The young guys are growing up, the older guys are a year better.”

The Parsons-led pass rush has 20 sacks, one behind San Francisco for the NFL lead. Parsons, who has three two-sack games, is tied with Joey Bosa of the 49ers and New England's Matt Judon for the league lead with six sacks.

The Cowboys haven't finished out of the top 10 in passing offense since 2018. It appears they won't get anywhere close in 2022.

Dallas is 27th in the NFL in passing at 182.2 yards per game, coming off its lowest net passing total in a victory since 2000.

Rush has done his part by going without an interception while the Cowboys await Prescott's return. But opponents figure to load up against the run better than the Rams did until Dallas gets the passing game going.

DE Dorance Armstrong, who also has a two-sack game, returned on a two-year deal after Randy Gregory bolted for Denver in a last-minute change of heart. He had probably his best game as a pro against LA.

Armstrong had the first strip-sack of Stafford, leading to DeMarcus Lawrence's 19-yard fumble return for the touchdown. Another powerful rush up the middle led to Armstrong's blocked punt later in the first.

WRs CeeDee Lamb and Michael Gallup had crucial drops that kept the Dallas passing game from being at least a little more productive.

While Gallup had a spectacular toe-dragging catch for 27 yards on third-and-16 to keep a drive to a field goal alive, his drop on an easy third down catch in the first half was followed by LA's only TD.

Lamb's drop also cost Dallas a third down conversion early in the fourth quarter when the Cowboys were trying to protect a 19-10 lead. The defense answered with a three-and-out.

Prescott has another doctor's appointment Tuesday before the plan will be set for the week. McCarthy has said he wants Prescott getting a full week of practice before playing. It's been four weeks since surgery. ... Parsons played through a groin injury that had him limping noticeably at times. ... OL Jason Peters was inactive against LA with a chest injury that's expected to sideline him several weeks.

9-0 — Dallas' record under McCarthy when getting a defensive touchdown. Those nine defensive TDs since the start of 2020 are the most in the NFL.

Prescott was on his way to NFL Offensive Rookie of the Year honors in 2016 when the Cowboys and Eagles last met in October with first place in the NFC East on the line. His touchdown pass to Jason Witten in overtime gave Dallas a 29-23 victory at home.

That was a sixth consecutive victory since a season-opening loss. This week, the Cowboys are trying for five in a row since losing to Tom Brady and Tampa Bay in the opener.