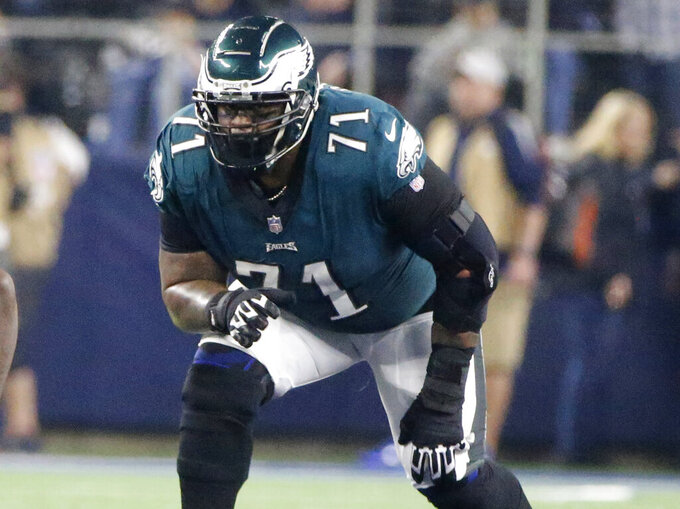 FILE - Philadelphia Eagles offensive tackle Jason Peters (71) lines up against the Dallas Cowboys in the second half of an NFL football game in Arlington, Texas, Sunday, Dec. 9, 2018. The Dallas Cowboys have agreed to a one-year contract with free agent left tackle Jason Peters, adding a longtime NFC East rival to address injury issues on the offensive line, a person with knowledge of deal said Monday, Sept. 5, 2022. (AP Photo/Michael Ainsworth, File)

Now that the two-time All-Pro with the Philadelphia Eagles has joined the Cowboys, Peters calls it “swagger.”

Hey, a guy can change, particularly with the ever-evolving rosters of the NFL.

“You can't blame me,” Peters said Monday after signing a one-year contract with a club needing help at left tackle. “We were rivals.”

Dallas is hoping the 40-year-old Peters can help make up for the loss of eight-time Pro Bowler Tyron Smith, who is likely out until at least December with a torn hamstring. Peters is joining the team's practice squad and probably won't be ready for the opener Sunday night against Tampa Bay.

Rookie Tyler Smith, who played left tackle at Tulsa, worked almost all of the offseason and training camp at left guard with the idea of getting the first-round pick in the lineup. After Tyron Smith's hamstring tear that also fractured his left knee in practice two weeks ago, Smith moved back to his college position.

Tyler Smith said he was getting first-team reps at left tackle Monday, which means he should start against the Buccaneers, but Peters will get strong consideration for that spot once the 40-year-old Texas native is ready to play in a game.

Peters didn't say he expected to start once he was ready, which he said would take a “couple of weeks.”

“If Smith gets in there and starts rolling and they want to keep him. I am just going to help him,” said Peters, who has started 218 of 228 games in his career. “I ain’t no guy who is going to feel some way if I don’t start.”

Coach Mike McCarthy declined to address how the addition of Peters will affect the the makeup of the offensive line.

“This is about adding depth and bringing another excellent player into your program,” McCarthy said. “This is more about adding a future Hall of Fame player to your lineup — to your football team.”

Peters spent 11 of his first 16 seasons with Philadelphia before starting 15 games with Chicago last season. The nine-time Pro Bowler from Arkansas started his career as an undrafted free agent with Buffalo.

He was born, raised and still lives in East Texas, but Peters said he grew up a Bills fans, which is why he signed with them out of college. He wasn't going to pretend it was different to put on Cowboys blue after a decade in Eagles green.

“Umm, yeah, a little bit,” Peters said when asked if it was weird. “Like I said, that was our rivalry. You know the Dallas and Eagle rivalry go deep, so it’s kinda weird. But I’m here in my home state and ready to roll.”

While five-time All-Pro right guard Zack Martin anchors the Dallas offensive line, none of the other four expected starters on opening day has played more than three years. Connor McGovern, who missed his entire rookie year win 2019 with an arm injury, is at left guard with third-year players at center (Tyler Biadasz) and right tackle (Terence Steele).

“What (Peters) brings to the table, what he brings to the offensive line room, all of that is part of his value,” McCarthy said. “That’s why this is just such a great fit for us and for him. So we do have a lot of young offensive linemen that will benefit.”