Crowder catching on quickly as 'weapon' in Jets' offense 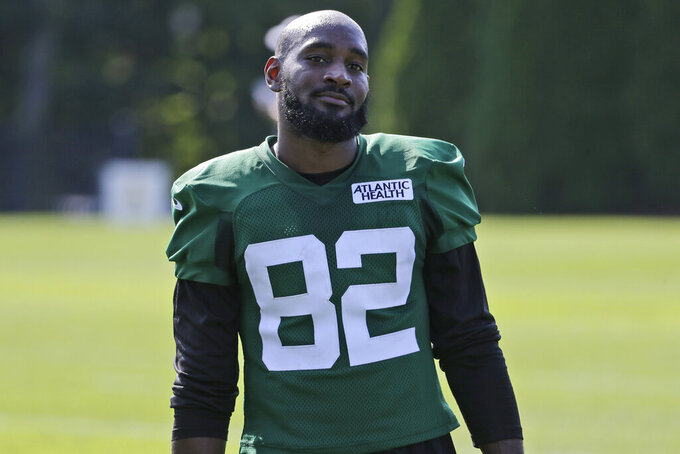 FILE - In this July 25, 2019 file photo New York Jets Jamison Crowder participates during practice at the NFL football team's training camp in Florham Park, N.J. Crowder signed with the Jets as a free agent in the offseason because he envisioned plenty of action in Adam Gase's offense. Well, the wide receiver has caught on quickly in training camp, becoming a favorite target of Sam Darnold while showing how valuable he could be. "I just want to be a weapon," Crowder said Wednesday, July 31, 2019. "Somebody that's reliable, somebody that's consistent. I just want to gain that trust with him that when he wants to go my way that he has that trust and that confidence that I'm going to make the play." (AP Photo/Seth Wenig, file)

FLORHAM PARK, N.J. (AP) — Jamison Crowder signed with the New York Jets as a free agent in the offseason because he envisioned plenty of action in Adam Gase's offense.

Well, the wide receiver has caught on quickly in training camp, showing how valuable he can be while becoming a favorite target of Sam Darnold.

Crowder shook off a scare from Monday, when he left practice with a foot injury that had him limping — and the Jets and their fans holding their breath.

"It was just something that needed to get checked out, but I was good, though," he said. "I was happy to be back out there today and I feel great."

The 26-year-old receiver, who has dealt with various injuries during his short NFL career, underwent tests on Tuesday that revealed no issues. After a day off from practice, Crowder practiced fully Wednesday and showed no signs of any issues, making the first catch of team drills.

And he continued to make several grabs the rest of the day — as he has done throughout the first six practices.

"He's so quick," Darnold said. "Everyone knows how quick he is, but he's fast, too. I think he can hit another gear, too. He's got game speed, especially when someone gets the better of him. If someone maybe predicts what route he's going to run and they maybe beat him to the spot on one play, the next play you know he's just going to come out firing.

"That's just kind of who he is, he's a competitor and it's good to see that."

Crowder spent his first four NFL seasons with Washington after being a fourth-round draft pick out of Duke in 2015. His mix of speed, shiftiness and ability to get open and make plays made him an intriguing option in Jay Gruden's offense with the Redskins.

The receiver never quite had the breakout performance many expected, though, and various ailments — hip, ankle, groin — contributed to that. Crowder played in just nine games last season, catching a career-low 29 passes for 388 yards and two touchdowns. He couldn't find chemistry with Alex Smith early on, and then an ankle injury sidelined him for seven straight games.

Crowder was not brought back by the Redskins, and he signed with the Jets on a three-year, $28.5 million deal that included $17 million guaranteed. While Crowder doesn't expect to have a "main role" in the offense — "I feel like I could have a solid role in it" — he recognizes that he should get lots of opportunities to make plays in New York.

"In this offense, you look at it and slot guys have had success," Crowder said. "That was one of the things that really caught my attention. I just felt like this was the right place for me at the time."

In Miami last year, Gase used Albert Wilson in the slot-type role, and Wilson had 26 catches and 391 yards and four touchdowns in just seven games before an injury shortened his season. With the Jets, Crowder will complement the speedy Robby Anderson and the tough, physical Quincy Enunwa to give Darnold different looks at receiver — in addition to promising second-year tight end Chris Herndon.

"Jamison is just a really good player," Darnold said. "He's a good tool to have."

Crowder said he and Darnold are regularly working together to solidify their chemistry. They even spent time in Southern California with a handful of other teammates in the offseason in workouts hosted by Darnold.

"I don't want to say anything has surprised me," Crowder said of Darnold. "I think that he's a young quarterback still learning, but you definitely see that he has the potential to be great in this league. He can really spin the football, he's pretty accurate.

"I'm just excited to be here and excited to continue to see him grow as I'm growing as well."

NOTES: Gase said TE Temuchin Hodges and CB Jeremy Clark are dealing with hamstring issues. ... S Marcus Maye (shoulder) remains on the active/physically unable to perform list and is being evaluated daily. "He's dying to get out there," Gase said.