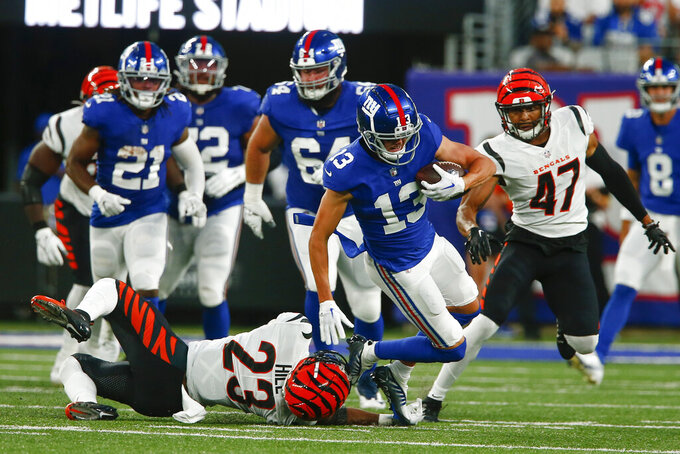 “I know you guys all came looking for a fight, but a lot of respect for Daboll," said Saleh, now in his second season with the Jets. "And we want to make a habit out of this. Not just because we’re playing each other in the preseason, but we’d like to break up camp. We’re too close for it not to work. If we as a team can make it work, then we can both help each other a lot.”

The Jets and Giants have played an annual preseason game since 1969 — the exception being the 2020 season, when COVID-19 wiped out the preseason. The teams will wrap up their 2-0 preseasons Sunday in another game at MetLife Stadium.

There were no major injuries in workout that lasted roughly 90 minutes at the Giants' training facility, though a two-minute drill at the end of the workout was scrubbed because both teams are banged up.

Jets cornerback D.J. Reed and rookie DE Jermaine Johnson both left practice to be checked on by trainers. Saleh said they’re both fine, and Johnson was able to return late in the session.

Giants starting outside linebacker Azeez Okulari seemed to hurt something in his lower leg running sprints after the workout. The team's sack leader last season (8 1/2) missed the start of training camp with a hamstring.

The last time the teams held a joint preseason practice was in 2005 at the Giants' camp at the University of Albany. It was a fight-filled session involving players and coaches.

“I think that’s natural when you go against another team," the fourth-year quarterback said. ”With that being said, I thought guys did a good job practicing the right way and taking care of one another for the most part."

David Sills, who has played in four games since joining the Giants in 2019, is one of the biggest surprises of camp, along with fellow wide out Alex Bachman. Sills has gotten some first-team reps with Kadarius Toney banged up and Sterling Shepard on the active physically unable to perform list until Wednesday.

“I think he knows where I’m going to be, I know where he wants me to be,” Sills said of Jones. "It’s not perfect, but we’re doing some pretty good things and I think we’re going to continue to try to improve it and go out there every day and keep refining our craft.

NOTES: Jets cornerback Bryce Hall intercepted a Jones pass on a fade pattern to the corner of the end zone. .... Giants rookie Cor'Dale Flott intercepted a Joe Flacco pass and Olaijah Griffin picked off Mike White. ... Tight end Tanner Hudson, whom the Giants got on waivers from San Francisco, was wide open when he caught a deep seam pass by Tyrod Taylor. Hudson is from Camden, Tennessee, and played at Southern Arkansas. “You really can’t control the outside forces,” Hudson said. “I just came in and worked every day to try to better myself Because, you know, if it’s not for one team, it might be for another like the case out here.” ... Teams have to cut 27 players by Tuesday to get the 53-man limit.