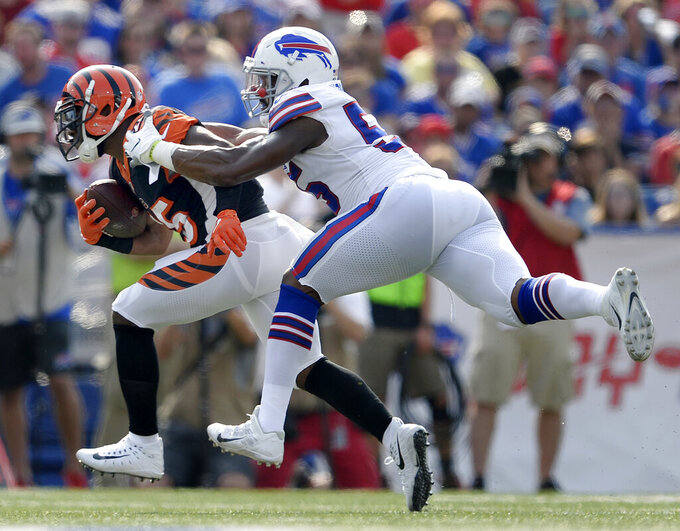 FILE - In this Aug. 26, 2018, file photo, Cincinnati Bengals running back Giovani Bernard, left, is tackled by Buffalo Bills defensive end Jerry Hughes during the first half of a preseason NFL football game in Orchard Park, N.Y. The Bengals travel to Orchard Park this week for the Bills' home-opener. (AP Photo/Adrian Kraus, File)

ORCHARD PARK, N.Y. (AP) — Andy Dalton fondly recalls the warm welcome he received a little over a year ago, when the Bengals traveled to Buffalo for a preseason game.

The Cincinnati quarterback drew several ovations after winning over Bills fans' hearts for his last-minute touchdown to beat Baltimore in the 2017 season finale. The Ravens' 31-27 loss propelled Buffalo into the postseason and snapped the team's 17-year playoff drought.

Dalton knows better than to listen for any cheers in facing the Bills (2-0) in Buffalo's home opener Sunday.

"Ha, ha, no," Dalton said with a healthy chuckle. "I'm not expecting the same kind of ovation I got last time."

Bills defensive end Jerry Hughes has made a point of personally informing Dalton that won't happen.

"It was such a big moment in our franchise's history and everything the fans did for him, which is really cool," Hughes said, recalling watching Dalton hit Tyler Boyd for a 49-yard touchdown pass to convert a fourth-and-12 with 49 seconds left against Baltimore. "But we understand, and I tell him this every time I see him back in Texas, when we get on the football field, it's go-time."

And Hughes is speaking as Dalton's long-time friend, after the two grew up in Houston and were college teammates at TCU.

Buffalo is on a roll in opening the season with two road wins, both at the Meadowlands, and in position to enjoy its first 3-0 start since 2011.

The Bills defense has allowed just 22 points — not including an interception returned for a touchdown and safety in a 17-16 season-opening win against the Jets.

And their new-look offense under second-year quarterback Josh Allen is finding its rhythm after engineering four 70-plus-yard touchdown drives in a 28-14 win over the Giants last weekend.

The Bengals (0-2) are still trying to find their identity under rookie coach Zac Taylor.

After a tightly contested 21-20 season-opening loss at Seattle, Cincinnati unraveled in giving up 572 yards — the fifth-most in franchise history — in a 41-17 loss to San Francisco.

"The loss is not something we're going to run from," Taylor said. "We got blown out at home. We could say it was frustrating, but we will not allow our guys to hang their heads."

Though Dalton leads the NFL with 61 completions and is second with 729 yards passing, the Bengals' running attack has stalled.

An injury depleted offensive line has been the biggest issue. Rookie left tackle Jonah Williams tore a labrum in offseason workouts. Backup Cordy Glenn — a former Bill — missed the first two games with a concussion. And third-string tackle Andre Smith hurt his groin against the 49ers but is expected back this week. Cincinnati is last in the league with 59 yards on 33 carries through two games.

Running back Joe Mixon resorted to posting a message on Twitter, apologizing to his fans.

"I promise I will get it right and we will be better," wrote Mixon, averaging 1.8 yards per carry.

Taylor was hired from the Rams to replace Marvin Lewis, who was fired after failing to win a playoff game in 16 seasons. The 0-2 start is ominous. It's the 17th time in franchise history that the Bengals have opened 0-2, and have never managed a winning record after such a start.

"We win this week, and the feeling in this building is a lot different," Dalton said.

Buffalo tight end Tyler Kroft is in position to make his season debut and against his former team. The Bills offseason free-agent addition has practiced the past three weeks after missing the entire offseason with a broken right foot.

"Another added threat that you're going to have to worry about in the passing game," Allen said of Kroft, who spent his first four seasons in Cincinnati.

Aside from applause, Dalton's win over Baltimore led to Bills fans donating more than $450,000 to the quarterback's charitable foundation. He returned a portion of it back with a donation to Buffalo's Roswell Park Comprehensive Cancer Center.

"It shows the game's bigger than just football," Dalton said.

Another $100,000 was donated to Boyd's cause of choice, which went to funding a youth sports league in his hometown of Clairton, Pennsylvania.