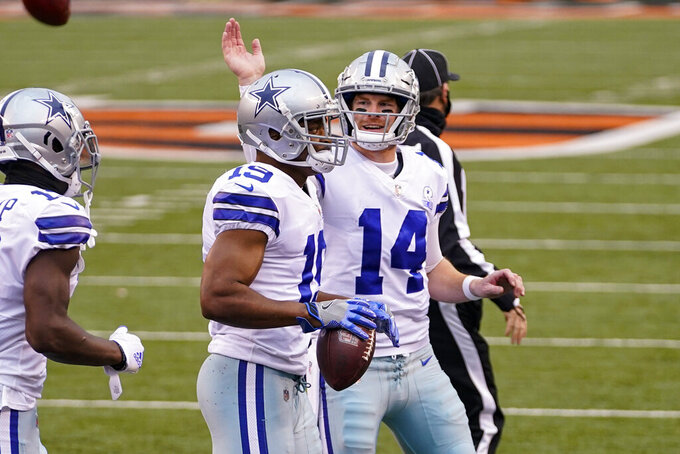 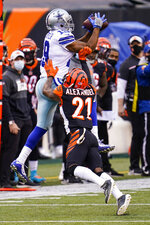 CINCINNATI (AP) — Cowboys quarterback Andy Dalton put an exclamation point on his return to Cincinnati with a short touchdown pass late in the game to pile some more points on top of the woeful Bengals.

Dalton wanted this win badly. He was the starting quarterback for the Bengals for nine seasons and was unceremoniously released after the team took Heisman Trophy winner Joe Burrow with the top pick in the NFL draft last spring.

Back in Paul Brown Stadium as the Cowboys starter on Sunday, he was good enough to help lead his new team to a 30-7 win over his old one.

“This one was special,” Dalton said. "A lot of range of emotions, from being back in the city, being in the stadium, being on the other side, all that kind of stuff. Good to have the emotion at the end of being very happy that we got this win.”

The Bengals greatly contributed to the cause of their former QB. They fumbled the ball away on their first three drives — one fumble returned for a touchdown — leading to 17 first-half points by the Cowboys (4-9). That was all they needed.

The homecoming for Dalton was the storyline leading up to a game between two injury-plagued teams having disappointing seasons. Dalton finished 16 for 23 for 185 yards and two TDs, as the Cowboys stayed in contention in the weak NFC East. He threw an 11-yard, second-quarter touchdown to Amari Cooper, and hit Tony Pollard for a 7-yard score with 2:00 left in the game. Afterward, coach Mike McCarthy presented him with the game ball.

“Definitely special for him,” McCarthy said. “Make no bones about it. He wanted to win this game, and more importantly, everybody in this locker room wanted to win it for him.”

The Bengals (2-10-1), whose offense has struggled mightily since Burrow was lost to a knee injury on Nov. 22, got in a hole early and couldn't dig out.

On the first Cincinnati drive, running back Giovani Bernard fumbled for the first time in 830 carries, leading to a Dallas field goal. The Bengals were driving on the next series when running back Trayveon Williams’ fumble was recovered by linebacker Aldon Smith and returned 78 yards for a touchdown.

On Cincinnati's third drive, receiver Alex Erickson lost the handle after a hand-off. The recovery by Jaylon Smith set up a 53-yard Dallas drive capped by the Dalton-to-Cooper TD pass.

“It makes you sick to start the way we started today,” Bengals coach Zac Taylor said.

Cincinnati got within 10 at the end of the first half when Brandon Allen threw a 5-yard touchdown pass to A.J. Green, but that was it.

Dalton was the face of the franchise, led Cincinnati to the playoffs from 2011-15, and holds most of the team's passing records. After his release, he signed with the Cowboys as a backup, and stepped in when Dak Prescott suffered a season-ending ankle injury. He missed time with a concussion and COVID-19, but improved to 2-4 as the starter with the win over his former team.

After he threw the late TD pass Sunday, he signaled to his wife J.J. in the stands, and the two shared an unspoken moment.

The Bengals hurt themselves again in the fourth quarter when a 13-yard touchdown run by Samaje Perine was nullified by a holding call. The threat ended when Allen overthrew Tyler Boyd on a fourth-down pass from the Cowboys’ 10.

Cowboys: CB Saivion Smith left with a hand injury in the fourth quarter and didn't return.

Bengals: Allen injured his right leg late in the game and didn't return. Ryan Finley replaced him on the last two drives. Allen said he couldn't predict his status for next week.

The Cowboys host the 49ers next Sunday.

The Bengals get a Monday night home game against the Steelers on Dec. 21.