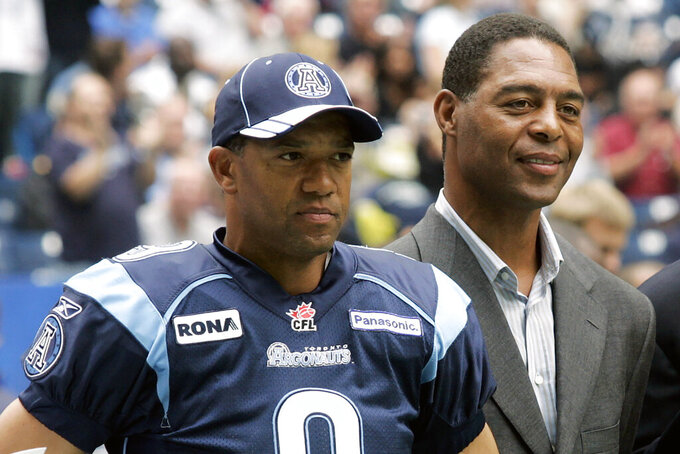 FILE - Toronto Argonauts Damon Allen, left, and his brother Marcus Allen stand on the sidelines before a Canadian Football League football game against the Hamilton Tiger-Cats in Toronto, in this Saturday, Sept. 9, 2006, file photo. Three words resonate with Damon Allen when thinking of what his brother and NFL legend Marcus told him on multiple occasions during his storied career in the Canadian Football League. “Play within yourself,” Allen said. Now, Allen is hoping to share those words and his vast knowledge from a Hall of Fame career in the CFL with the Las Vegas Raiders, the organization his older brother starred for and led to a Super Bowl title in 1984. (Nathan Denette/Canadian Press via AP)

LAS VEGAS (AP) — A single short sentence resonates with Damon Allen when he thinks about what his brother and NFL legend Marcus Allen told him on multiple occasions during Damon's storied career in the Canadian Football League.

“Play within yourself,” Allen said. “I remember those words all the time because (he) used them more than once to me. I understood playing within myself meant to bring my whole skill set to the game ... on a consistent basis and to optimize my best to be the best.”

Now, Allen is hoping to share those words and his vast knowledge from a Hall of Fame career in the CFL with the organization his older brother starred for and led to a Super Bowl title in 1984.

“We are excited to have Damon among our fellowship coaches this summer,” Raiders coach Jon Gruden said. “His experience will be a great addition to our staff and he’s already a part of the Raiders family, of course, so it’s the perfect fit.”

Just as the Bears kept Burris on staff for the 2021 season, Allen said the long-term goal is to stay on with the Raiders as a full-time coach.

While the Allen brothers agreed during an interview with The Associated Press that from the outside an opportunity like this appears to be a younger brother benefitting from his older brother’s legacy, a quick glance at a resume filled with impressive numbers during Damon's illustrious 23-year career north of the border squashes that notion.

Allen won Grey Cup titles twice with Edmonton and once each with BC Lions and Toronto and earned three championship game MVP trophies. Upon retiring in 2008, he was the leading passer in pro football history (72,381 yards). While he’s since been passed by Drew Brees (80,358), former CFL star Anthony Calvillo (79,816) and Tom Brady (79,204), Allen remains as large a sports figure in Canada as his brother is in the NFL.

Damon Allen said he believes there are elements in today’s NFL that are very similar to what the CFL has been doing for years, and with what he’s accomplished he is prepared to be an asset to any coaching staff.

“I’ve seen every situation that a player at that position can conceive or been through on a physical side of it. So why not do it at the highest level,” Damon Allen said. “I have a great amount of respect for coaches. I don’t think you ever stop learning. There are great minds in the game of football, especially in the National Football League. And so to be in a culture like the Raiders', with the energy level from the head coach, understanding the ‘commitment to excellence.’

“It makes it special due to the bloodline because when your brother is a part of an organization, he embodies those very encouraging Raider words used today. We understand the importance, we understand what the silver and black meant to our family.”