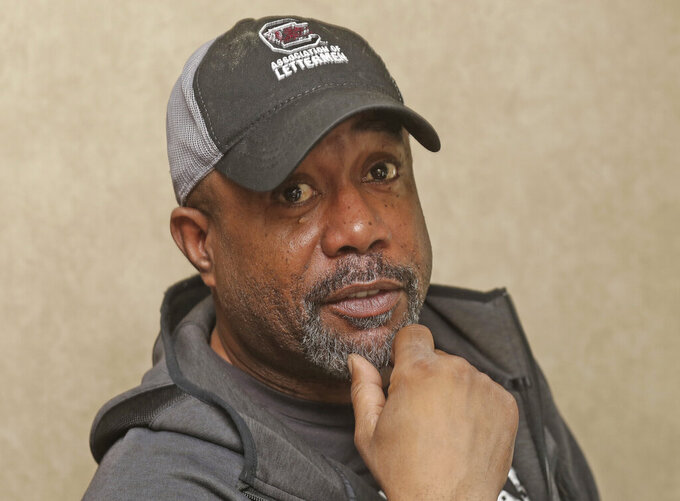 FILE - Darius Rucker poses for a photo before taking the stage for a pregame tailgate party before Super Bowl 54, Sunday, Feb. 2, 2020, in Miami. While singer/songwriter Darius Rucker notes that pretty much all athletes “want to be singers and all singers want to be sports guys,” the biggest similarity is how they all need to mesh with teammates. Or bandmates. (AP Photo/John Carucci)

Every quarterback on every NFL team readily acknowledges the importance of teamwork. So would every entertainer.

While singer/songwriter Darius Rucker notes that pretty much all athletes “want to be singers and all singers want to be sports guys,” the biggest similarity is how they all need to mesh with teammates. Or bandmates.

“When you are up there with a band and playing a song, we have to play at the same tempo and have to play all the right notes,” says Rucker, who has had 10 No. 1 singles and four No. 1 albums on the country chart, and previously was the front man for Hootie & the Blowfish, including during a successful reunion tour in 2019. "If you have somebody in a different key and it is wrong, the whole thing is messed up. That's why practices and rehearsals are so important for us, and why practice is so important in sports.

“Football is a prime example. You can't have guys doing all different things on a play than what they are supposed to.”

As for being part of two teams, basically, with his country and rock 'n roll bands, Rucker explains that they are two entirely different entities. Sort of like Tom Brady with the Patriots and Tom Brady with the Buccaneers — with the knowledge that the quarterback brought his Super Bowl magic to Tampa Bay from New England.

“It can be frustrating and hard,” Rucker says, "but I consider myself lucky and blessed. With the guys in Hootie, it was awesome to be with them and hear how they would have done some of my country stuff. When we toured a couple of years ago, I would have been ripping them off if we were not doing some of them.

“Same thing with when I am with my country band and we are doing some Hootie songs.”

Rucker has been something of a fixture at NFL events. For fans walking into U.S. Bank Stadium in Minneapolis before the 2018 Super Bowl, there he was on the massive video board performing his hits. He also sang the national anthem before the Miami Dolphins' home opener in September.

Rucker famously has mentioned his love for the Dolphins in song ("Only Wanna Be With You) and also is a die-hard fan of the South Carolina Gamecocks. So it's not been a particularly memorable year for his rooting interests.

Musically and otherwise, though, 2021 has been quite memorable. He spent an evening on a makeshift stage at Manhattan's seaport, with the Brooklyn Bridge prominently in the background, for a concert with Zac Brown Band, Lee Brice and Chris Young during which they each sang along to the others' songs.

“Doesn't get any cooler than that,” he says.

And Rucker recently announced a concert tour in which he will perform at iconic venues and music halls across America, including the Fox theaters in St. Louis, Detroit and Atlanta; the Beacon in New York; and the Murat in Indianapolis.

“These are places a lot of the guys have not played before, and they are these famous buildings, and so many great musicians have come through and done great things,” he says. "Like in sports, it is totally like that for us.

“Wrigley Field, I will never forget that, I still can’t believe I just said that we played Wrigley Field with Rascal Flatts, and it was amazing. To do the national anthem at Yankee Stadium or sing it in Atlanta for the World Series. Or Madison Square Garden — it's not just known for sports, that is your dream call to play as an artist. I just love that place. It is way past the word ironic.”

The three-time Grammy Award winner's connection with the NFL has been amplified with the introduction of the NFL Darius Rucker Collection by Fanatics. It will feature a fashion-forward selection of T-shirts, fleeces, outerwear and more.

And yes, he's tried on merchandise of teams other than the Dolphins, even from the team's AFC East rivals. Rucker specifically points to the apparel for a franchise that wears green and gold.

“The Packers' stuff, when I was looking through a lot of the clothes and picked up the Packers and looked and saw the logo of the NFL and my name on it,” he says. "I am so proud of this, that they knew what I wanted it to look like and how I wanted to do it.

“I am such an NFL freak and love the game so much, and the fact I am doing anything with the NFL is awesome. I would wear everything.”