Darnold out again for Jets, Flacco to start vs. Chargers 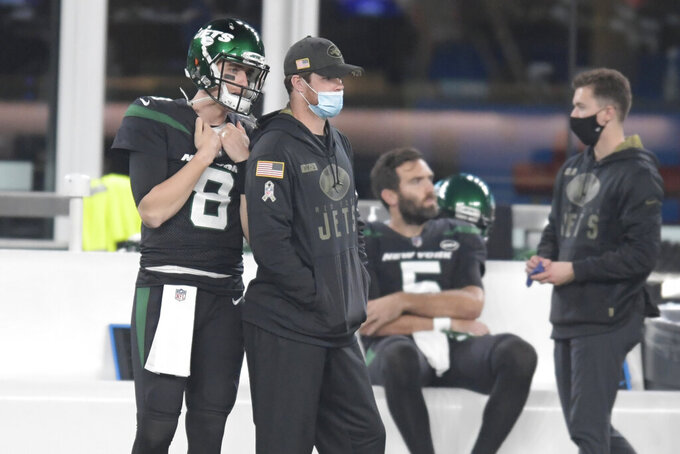 NEW YORK (AP) — Sam Darnold is sitting out again this week — and he could be sidelined a few more games.

The New York Jets quarterback was ruled out Monday for a second straight game as he recovers from an injured right shoulder. Coach Adam Gase announced that Joe Flacco will start in Darnold's place when the winless Jets take on the Chargers in Los Angeles on Sunday.

“I think it’s a smart decision not to play,” Darnold said. “I’ve given it thought and it’s just got to heal. It’s got to have time, and that was kind of our mindset.”

Darnold sprained the AC joint in his right shoulder against Denver on Oct. 1, but stayed in the game before being sidelined for two contests. He reinjured it at Kansas City on Nov. 1 when he took a hard hit, but also finished that game.

He sat out the following week against New England, when Flacco nearly led the Jets to their first victory before New York fell 30-27 on a field goal as time expired. Darnold was limited in practice on Nov. 6, then sat out practice the following day and was ruled out for the game.

Despite the Jets having a bye-week break, Darnold still isn't ready to play.

“When we got as close as we did last week and then having to shut him down, I was hoping that the week off and then a few extra days before we actually start practicing, he’d feel better than he did last week,” Gase said. “We’re just trying to make sure his strength is where it needs to be for him to go out at practice and make the throws he wants to be able to make. You know, throw the ball and place it where he wants to, instead of him feeling any kind of struggling and doing what he needs to do down-in and down-out.”

Gase said Darnold will be eased into an interval throwing program when his shoulder feels up to it.

“We’ll kind of see where he is after this game,” Gase said. “Hopefully, we can get him back sooner than later.”

The coach also couldn't predict if Darnold would be ready to play in Week 12 against Miami. Gase added that the team hasn't considered placing Darnold on injured reserve.

After the initial injury, Gase and the Jets spoke of it being mostly a pain management issue for Darnold — that he could play if he could stand the discomfort. It now appears the team won’t put the quarterback on the field again until he’s 100% healthy.

“When he came back the first time, he wasn’t having issues making throws and the pain of what it was last week wasn’t the same as it was the time before,” Gase said. “I think it was just, for whatever reason, it was tough for him last week. When he was throwing a couple of throws that he tried to make, he couldn’t throw it the way that he thought he should be able to, so that was the reasoning why he didn’t play last week."

Darnold brushed aside a question about whether it was a mistake — by him and/or the team — to return so quickly after the shoulder was first injured.

“No, I think with everything that the doctors told me, I thought it was a good decision to come back,” he said. “Obviously, I look back on that play against Kansas City where I could have gotten down and slid. I think that was the biggest mistake of it all. So, I just think where I’m at right now, I just need to let it heal. I’ve got to let this thing run its course for where it’s at right now and make sure I’m 100% before I come back.”

Darnold said he obviously wants to play, but agreed with the decision after weighing several factors, including risk of further injury and the potential effects on his long-term future.

“After doing that, I thought it was the best decision not to play this week," said Darnold, who will miss his 10th game in three NFL seasons.

While Darnold is running out of time to get back on the field this season, his sights are set on returning to the huddle.

NOTES: The Jets claimed OL Pat Elflein off waivers from Minnesota. The 2017 third-round pick missed most of the first half of the season with a thumb injury. ... Gase said LT Mekhi Becton “looks like he’s good to go” to practice and play after leaving the game against New England with a chest injury. ... K Sam Ficken (right groin) appears close to returning after missing three games. ... DL Quinnen Williams is still dealing with a hamstring injury, but Gase hopes he'll at least be limited at practice. ... CB Brian Poole (shoulder/knee) and DE Henry Anderson (knee/ankle) could miss practice time. ... LB Blake Cashman remains sidelined with injuries to both hamstrings and appears unlikely to play this week.