Defense dominates but offense sputters as Rams fall to 5-4 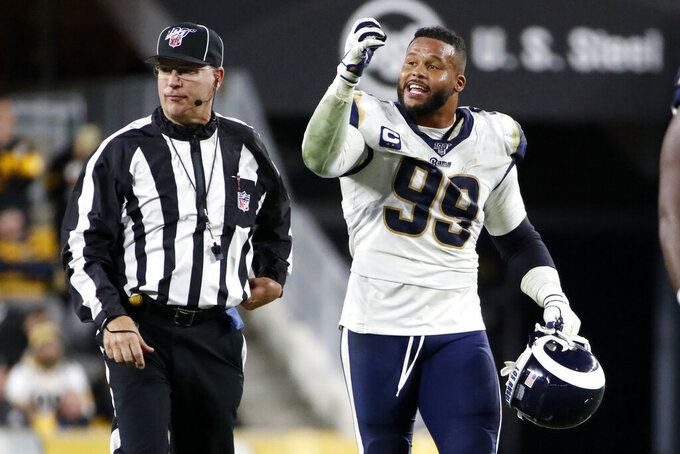 Los Angeles Rams defensive tackle Aaron Donald (99) makes his case to an official during the second half of an NFL football game against the Pittsburgh Steelers in Pittsburgh, Sunday, Nov. 10, 2019. (AP Photo/Don Wright) 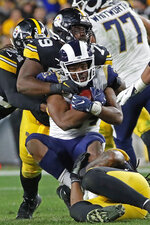 PITTSBURGH (AP) — Aaron Donald slipped by Pittsburgh guard David DeCastro and crashed into Steelers quarterback Mason Rudolph, slamming him into the Heinz Field turf for a safety early in the fourth quarter on Sunday, a play the Los Angeles defensive end thought would ultimately swing momentum to the Rams.

Only the points that came so easily last year as Los Angeles reached the Super Bowl never materialized.

The offense sputtered. The defense allowed a late field goal drive that gave the Steelers some needed cushion. And a season that began with such promise is now potentially slipping away following a 17-12 loss that left the Rams at 5-4 and well off the pace of San Francisco and Seattle in the hyper competitive NFC West.

"We've just got to keep playing ball," Donald said after finishing with five tackles and a half-sack in his first visit to his hometown as a professional. "We can't worry about that. We have to go week to week and try to find ways to win games. That's what it comes down to. That's all you've got to do, try to find ways to win."

Los Angeles found a way to do the opposite against the Steelers (5-4), converting just 1 of 14 third downs, turning it over four times and failing to score an offensive touchdown for the first time since its Super Bowl loss to New England.

"We didn't really allow ourselves to get into a rhythm," Rams coach Sean McVay said. "There was really no flow. We didn't convert any of the third downs, so myself, everybody really wasn't good enough today."

Well, maybe the Donald-led defense was. Los Angeles limited the Steelers to 273 yards, scored the team's lone touchdown on Dante Fowler's 26-yard fumble return on the game's second snap, recovered two Pittsburgh fumbles and sacked Rudolph three times. Yet it wasn't enough on a day the offense couldn't get out of its own way.

Jared Goff completed 22 of 41 passes for 243 yards and two interceptions. He failed to complete a single pass to leading receiver Cooper Kupp, rendered a nonfactor while facing double coverage most of the afternoon.

"We weren't really productive as a whole offensively, which is obvious," McVay said. "Some of those things are where I need to do a better job for all of us, and we all need to figure out how to be collectively better, and part of that is getting Cooper more involved."

Might want to do the same with Todd Gurley. The Rams have tried to be mindful of Gurley's workload, but he certainly looked fresh while running for 72 yards on 13 carries. Yet he also spent significant stretches on the bench, including a pair of series in the fourth quarter with Los Angeles trailing.

"I thought Todd really had some tough-earned runs,"McVay said. "We got drives going, but at the end of the day, we ended up being in some two-minute situations at the end of the game. It was kind of hard to get back into any sort of flow around the football."

An offensive line that lost center Brian Allen and right tackle Rob Havenstein to knee injuries didn't help. Goff spent most of the afternoon under heavy duress. The Steelers sacked him four times and pressured him into a fumble that Pittsburgh safety Minkah Fitzpatrick returned 43 yards for a touchdown in the second quarter that gave the Steelers the lead for good.

"It's tough, but it's part of the game," Goff said of the line's health issues. "It happens every week, and this week it was us, and we were really close to overcoming it, and almost did. We came up short."

Any outside chance the Rams had of getting hot and catching first-place San Francisco and possibly even second-play Seattle is now all but gone. The Chicago Bears (4-5) visit next week. Chicago crunched the Rams 15-6 a year ago. A year later, the offense appears to be going backward.