Delay of game: Watson suspension has Browns' plans on hold 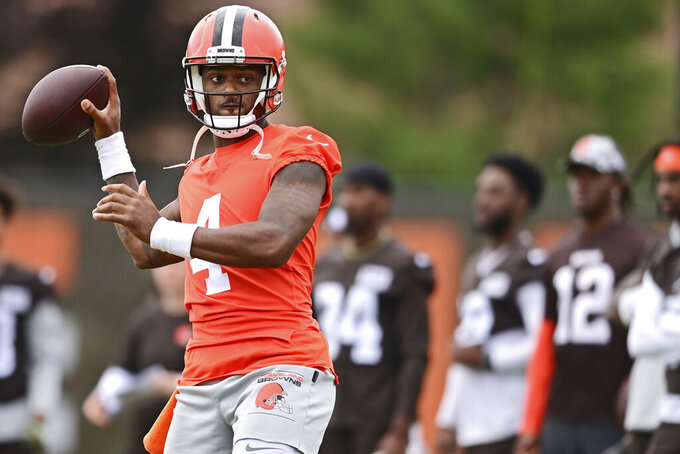 FILE - Cleveland Browns quarterback Deshaun Watson throws during NFL football practice in Berea, Ohio, Sunday, Aug. 14, 2022. A person familiar with the situation tells The Associated Press on Thursday, Aug. 18, 2022, that Watson has reached a settlement with the NFL and will serve an 11-game suspension and pay a $5 million fine rather than risk missing his first season as quarterback of the Browns following accusations of sexual misconduct while he played for the Houston Texans. (AP Photo/David Dermer, File)

CLEVELAND (AP) — The Cleveland Browns were convinced their perpetual quarterback puzzle was finally, thankfully, solved when they signed Deshaun Watson.

The biggest piece is still missing — or in this case, displaced.

Watson's 11-game NFL suspension for violating the league's personal conduct policy after he was accused of sexual misconduct by two dozen women has put the team's plans to challenge for the AFC title and perhaps earn its first trip to the Super Bowl on hold.

From a promising season to a jeopardized one.

Watson, who changed his mind and agreed to be traded to the Browns in March after the team put a fully guaranteed $230 million contract on the table, won't be eligible to play until Week 13.

Last week, the three-time Pro Bowl QB agreed with a league on a settlement that includes a $5 million fine and mandatory counseling. Those alleged offenses happened in Houston, but trailed Watson to Cleveland and have impacted a team with a stacked roster.

“It's important to remember that Deshaun is 26 years old and is a high-level NFL quarterback,” Browns owner Jimmy Haslam said at a news briefing shortly after Watson's suspension, which hung over the team for months, became official. "We are planning on him being our quarterback for a long time.”

But he'll miss 65% of Cleveland's games, and there's no telling what the Browns record could be when he gets back. It will also be interesting to see how Watson performs when he returns to the field after a 700-day layoff between regular-season starts.

While he's out Jacoby Brissett, who has been the consummate next-man-up during his pro career, will start and try to keep the Browns in the hunt.

The 29-year-old Brissett, who is 14-23 as a starter, has been as advertised in Cleveland. He's provided steadying leadership and exuded confidence that he can get the job done. But while there's no denying Brissett's a solid citizen, what he does playing behind center will matter most.

“The players naturally respect him for who he is as a player in this league and what he has made of his career to date,” Browns coach Kevin Stefanski said. “He's an established pro so the guys certainly respect him.”

Last season was a massive disappointment for the Browns. They didn't come close to meeting expectations following a playoff push the previous season, finished 8-9 with an injured Baker Mayfield at quarterback in the competitive AFC North and then made the controversial offseason move for Watson.

They knew it was risky and did it anyway.

Now they'll have to wait to see if it was worth it.

Myles Garrett's has eyed the NFL Defensive Player of the Year Award for several seasons. It might be time he got his hands on it.

The All-Pro defensive end finished last season with 16 sacks, a team single-season record. However, Garrett was slowed by a groin injury down the stretch and had just one sack in Cleveland's final four games.

It's those big plays in important December games that get a voter's attention.

He's also got his book-end partner back as the Browns re-signed Jadeveon Clowney, a fellow No. 1 overall pick who resurrected his career with Cleveland in 2021 while drawing double teams that helped Garrett.

Amari Cooper runs precise routes. The Browns are counting on the veteran wide receiver for much more than that.

Cooper arrived in Cleveland via trade from Dallas to upgrade an overhauled receiving group that featured Odell Beckham Jr. and Jarvis Landry this time a year ago.

While neither flashy nor controversial, Cooper, who has scored 27 touchdowns over the past four seasons, is consistent. He's already developed chemistry with Brissett.

“We’ve got his back,” Cooper said. “I know I’m going to put my best foot forward, try to always be open for him, make the job easy for him.”

Brissett's best passes could be very, very short ones.

The Browns will lean on a stable of solid running backs led by three-time Pro Bowler Nick Chubb, who rushed for 1,259 yards in 14 games last season.

Kareem Hunt's absence for nine games while he was hurt was a major blow to Cleveland's offense, and the dual-threat back is motivated this season by wanting to get a contract extension.

After watching Evan McPherson nearly boot the Bengals to a Super Bowl title, the Browns figured it was time to boost their kicking game.

The Browns drafted York in the fourth round — the highest a kicker had been chosen in six years — and the LSU product has not disappointed. Not yet.

With 60-yard range, the 21-year-old is a legitimate option for Stefanski.

Of course, the Browns will face Mayfield and Carolina in Week 1. The football gods wouldn’t have it any other way.

Mayfield, who was traded to the Panthers in July, beat out Sam Darnold for the starting job and will now get a chance to exact some revenge on the Browns.

Season openers haven't been kind to Cleveland, which is 1-21-1 in them since the franchise's 1999 rebirth.