Despite injuries, inconsistency, Eagles in the race at bye 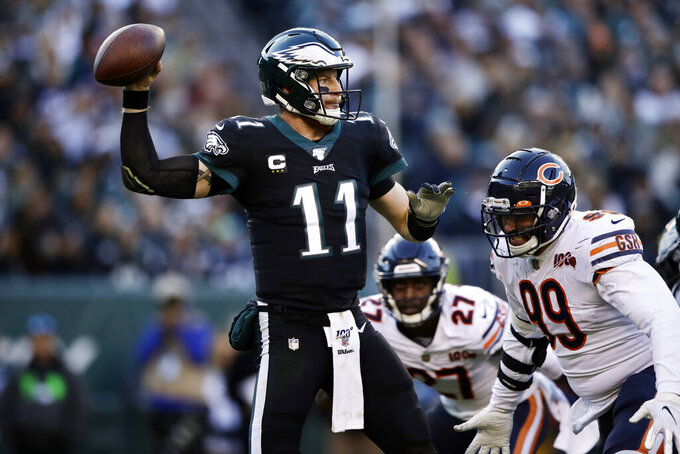 Philadelphia Eagles' Carson Wentz passes during the second half of an NFL football game against the Chicago Bears, Sunday, Nov. 3, 2019, in Philadelphia. (AP Photo/Matt Rourke)

PHILADELPHIA (AP) — Despite injuries and inconsistency, the Philadelphia Eagles enter their bye week right in the thick of the playoff race.

The Eagles (5-4) are soaring off to their mini-vacations following consecutive wins after back-to-back lopsided losses. They beat the Chicago Bears 22-14 on Sunday to stay close behind Dallas in the NFC East. The Cowboys (4-3) faced the New York Giants on Monday night.

"The challenge this week as a staff is to go back and just assess and re-evaluate and really break down these first nine games and really look at it with open eyes, honestly," coach Doug Pederson said Monday. "We're not game planning this week, so we get a chance to do that.

"I think out of this, we have to find consistency, especially in our passing game. We have to find a common thread there and we have to see what has been the breakdown, right. You have to be able to target an area, and then plan to fix it. These next couple days will be important for us to make those decisions and try to be a little more consistent moving forward."

A season that began with Super Bowl aspirations hasn't gone as planned. The offense has struggled mainly due to lack of production from the wide receivers. DeSean Jackson has played only one full game because of an abdomen injury that he aggravated on Sunday. Jackson is expected to have surgery Tuesday and may not return this season.

Alshon Jeffery has been plagued by drops. So has Nelson Agholor. Mack Hollins and J.J. Arcega-Whiteside have been invisible in the passing game.

On defense, the secondary was hit hard by injuries early. Starting outside cornerbacks Ronald Darby and Jalen Mills and nickel cornerback Avonte Maddox just played their first game together.

The run game is the team's strength. Jordan Howard had 82 yards and one touchdown on 19 carries vs. Chicago. Miles Sanders had 42 yards on 10 carries. The Eagles are 3-0 when they have at least 130 yards rushing.

Carson Wentz needs receivers who can get open and catch the ball. Jeffery has 29 catches for 304 yards and two TDs over the past six games. Agholor has only 14 receptions, Hollins has one and Arcega-Whiteside has none.

Rookie left tackle Andre Dillard was solid in his third career start. He helped hold Khalil Mack to four tackles and no sacks.

Cornerback Sidney Jones, a second-round pick in 2017, was a healthy scratch against the Bears. Jones has struggled to live up to expectations in two-plus seasons.

Jackson returned to play only one series against the Bears and made his injury worse. If he had had the core muscle surgery when he initially got hurt in Week 2, he may have salvaged his season. Now it's unlikely he'll play again this season.

8:14 — The Eagles dominated time of possession for the second straight week, holding the ball for more than 40 minutes. Leading 19-14, Wentz engineered a 16-play, 69-yard drive that lasted 8:14 and concluded with a field goal. The Bears got the ball back with 24 seconds remaining and fumbled the kickoff.