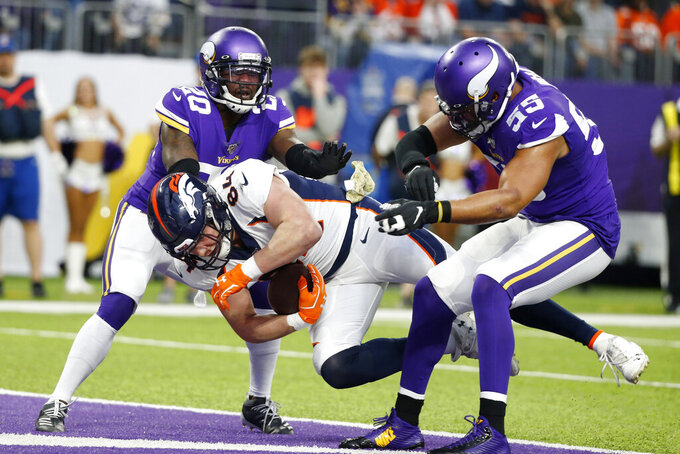 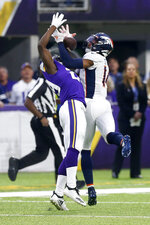 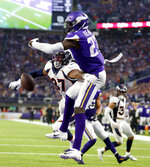 EAGAN, Minn. (AP) — After all the long passing plays and fourth-down conversions the Minnesota Vikings surrendered against Denver, the defense still had the game in its hands.

Forcing three straight incompletions by Broncos quarterback Brandon Allen inside the 5-yard line, the Vikings and their fans sweated out the final 10 seconds and pulled out a critical victory despite a 20-0 halftime deficit.

Backup safety Jayron Kearse was targeted on two of the final three throws, cornerback Trae Waynes on the other.

“I wouldn’t call it picking on me, because I feel like I can make those plays,” said Kearse, who also intercepted the last-ditch heave into the end zone by Dallas quarterback Dak Prescott the week before on the final play to preserve a win over the Cowboys.

The Vikings are third in the NFL in goal-to-go defense, giving up touchdowns on only 56.3% of those situations. They’re fourth inside the 20, at 46.7% allowed. But they’ve been letting too many teams get close. They’ve allowed 42 completions of 20-plus yards this season, fourth most in the league, and they’re 19th in passing yards allowed after ranking third last year.

Here’s a closer look at the Vikings (8-3) entering their bye week after the 27-23 victory over the Broncos:

Though Dalvin Cook surpassed 1,000 rushing yards for the season, the first Vikings player to get there since Adrian Peterson in 2015, a ground game that went nowhere in the first half was mostly abandoned with the hurry-up approach. That the Vikings could win with minimal production by Cook and another absence for wide receiver Adam Thielen was another testament to how sharp Cousins has been over the last seven weeks.

He’s in the top five in the NFL in most passing categories, including second in the NFL, according to Sportradar, with 42 completions of 20-plus yards. Cousins has 18 touchdown passes with only one interception and one lost fumble over the last seven games, and the comeback against the Broncos gave him and the Vikings a win for the second straight week after facing a fourth-quarter deficit.

“It was probably his best game that he’s played since he’s been here,” coach Mike Zimmer said.

With Russell Wilson, Philip Rivers and Aaron Rodgers among the opposing quarterbacks remaining on the schedule, the pass coverage needs to improve to keep the Vikings on track for the playoffs. Courtland Sutton was the third straight opponent with 100-plus receiving yards, giving Xavier Rhodes a tough time all afternoon.

The offense directed by Stefanski and designed by adviser Gary Kubiak favors multiple tight end formations, increasingly so with Thielen out, and all three of them played a significant part in the victory. Kyle Rudolph had the go-ahead touchdown reception, giving him 32 points over the last five games. Irv Smith Jr. had his first career score, putting the Vikings on the board for the first time. Tyler Conklin had his first two catches of the season, including a 20-yard haul over the middle on third-and-14 late in the third quarter.

Left tackle Riley Reiff, by all accounts, has had a solid season in pass protection and run blocking, but the Broncos gave him some trouble. Two of the five sacks of Cousins came against Reiff, one by Von Miller and another by Shelby Harris that caused a fumble and led to a field goal for Denver. Reiff was also penalized for holding to erase a 34-yard reception by Diggs in the second quarter when the Vikings badly needed a spark down 17-0.

After making it through the first half of the schedule with scant injury concerns, the list of sidelined starters has piled up. Strong safety Harrison Smith (hamstring) was hurt in the fourth quarter on Sunday, and free safety Anthony Harris (groin) had a setback during the week that put him on the inactive list for the first time this year. Nose tackle Linval Joseph (knee) missed his second game in a row, with Jaleel Johnson filling in. Weakside linebacker Ben Gedeon (concussion) was also hurt on Sunday, when Eric Wilson took over.

Right guard Josh Kline (concussion) was out, replaced by Dakota Dozier, and wide receiver Thielen (hamstring) did not suit up for the third time in five games. Thielen has played a total of only 16 snaps in that span, with rookie Olabisi Johnson taking on an increased role.

177: Consecutive pass attempts by Cousins without an interception, the longest active streak in the league. The only time Cousins was picked off over his last 282 attempts, a span of nine-plus games, was on Oct. 13 against Philadelphia when a sideline pass to Diggs slipped between the wide receiver’s hands, glanced off his facemask, and sailed back into the field of play where Andrew Sendejo intercepted it while he was still with the Eagles.

The coaching staff has a whopping 15 days between games to plan for Dec. 2, when the Vikings play the Seahawks in a Monday night road game in the final month of the season for the second straight year. Last time, a 21-7 loss by the Vikings triggered the firing of offensive coordinator John DeFilippo. They converted only 2 for 10 on third downs on offense and gave up 214 rushing yards.

Just as important as strategizing during the time off will be healing, with Thielen, Joseph and Smith particularly critical to have against the Seahawks.