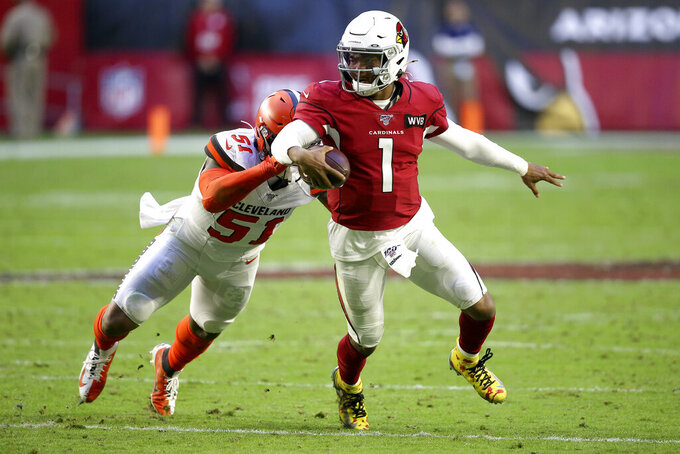 FILE - In this Dec. 15, 2019, file photo, Arizona Cardinals quarterback Kyler Murray (1) gets away from Cleveland Browns linebacker Mack Wilson (51) during the second half of an NFL football game in Glendale, Ariz. Coach Kliff Kingsbury and the Cardinals went 5-10-1 last year, but they're a popular pick to improve sharply this year. (AP Photo/Ross D. Franklin, File)

LOS ANGELES (AP) — The NFC West was a diabolically difficult division for most of the past decade, and it only seems to be getting tougher.

The NFL's winningest division last season will be stacked again in the fall with four franchises determined to win now. Three teams that posted winning records in 2019 will be joined by what looks like a much-improved version of the Arizona Cardinals, who are among the biggest winners of the early free-agent signing period after adding star receiver DeAndre Hopkins to a West already loaded with playmakers.

This ruthless division has produced five of the NFC's past eight Super Bowl representatives, including the past two. The Los Angeles Rams made that Super Bowl trip less than 14 months ago, but a lackluster offseason and some questionable salary cap management suggest they already might be headed to the division basement despite a star-studded roster under innovative coach Sean McVay.

The NFC West has been hyper-competitive since 2012, and it looks even more unforgiving now.

“It’s a very, very tough division again," Seattle Seahawks coach Pete Carroll said last month. "There’s no doubt about it. And I don’t think anybody wants to play (the NFC West). It will make us better.”

Led by the 13-win NFC champion San Francisco 49ers, the four NFC West teams combined last year for 38 regular-season victories, the most in the league. The West was the NFL's only division with three winning teams, and it would have had three playoff teams under the seven-team postseason format that goes into effect in the upcoming season.

This fall, all four teams from one division could theoretically make the playoffs. If any division is going to accomplish that improbable feat, the NFC West certainly seems to have the best chance, based on these four teams' recent body of work and their prospects for the year ahead.

But it would be easier if the Rams, Seahawks, Niners and Cardinals didn't have to play each other six times a year.

The NFC West has had six wild-card playoff teams and seven conference finalists in the past eight seasons alone, but it hasn't been dominated by anybody for long. All four teams have won the division within the past five years, and the Rams are the only repeat champions in that half-decade.

The most consistent winners have been the Seahawks, who have won at least nine games in each of the past eight seasons, missing the playoffs just once in that span. Carroll's remarkable consistency is even more impressive with the tumult of free agency, but the Seahawks have kept many key pieces in place from their 11-5 season — and they're still in the running to keep pass rusher Jadeveon Clowney in free agency.

The defending NFC champion Niners are still a powerhouse despite the loss of defensive tackle DeForest Buckner, a cornerstone of their Super Bowl defense during coach Kyle Shanahan's long-awaited breakthrough season. They got a first-round pick for Buckner, and they retained Arik Armstead and Jimmie Ward.

Coach Kliff Kingsbury and the Cardinals went 5-10-1 last year, but they're a popular pick to improve sharply this year after swinging a trade for Hopkins and adding additional talent in a fruitful free-agent signing period.

“It’s definitely motivating, there is no doubt,” Kingsbury said of the Niners' surge. “To see what Kyle has built there, and staying consistent to his culture and who he wanted to be and hanging with it through some tough quarterback injuries. Being in their division, playing them and seeing what they have, it’s definitely motivation for our organization.”

If the Cards can improve their defense, they're in position to make the leap partly because they have one of the most valuable salary cap management tools in the league: a solid quarterback on a rookie contract.

Kyler Murray passed for 3,722 yards and 20 touchdowns last season, and the overall No. 1 pick has plenty of room for improvement. He will be in his second season in Kingsbury's offense, and he'll be getting the ball to Hopkins, Larry Fitzgerald, Christian Kirk and Kenyan Drake.

So where does that leave the Rams, who missed the playoffs despite going 9-7 last year?

Big changes are underway in LA despite the Rams' three straight winning seasons under McVay. The now-34-year-old wunderkind dismissed a major portion of his staff after missing the postseason, and he hired untested career assistant Brandon Staley to run his defense.

The job is even tougher because Los Angeles’ biggest offseason addition might be its new logo and uniforms. The Rams have lost running back Todd Gurley, defensive tackle Michael Brockers, leading tackler Cory Littleton, edge rusher Dante Fowler and elite nickel back Nickell Robey-Coleman in the past two weeks alone.

But they've still got Aaron Donald, Jalen Ramsey and one of the NFL's best collections of receivers for Jared Goff with McVay pulling the offensive strings. It's too early to write off the Rams — but in the NFC West, good isn't good enough.

“This has always been a tough division since I've been here, so that's no surprise,” Goff said recently. “We know our toughest regular-season challenges are in the NFC West.”