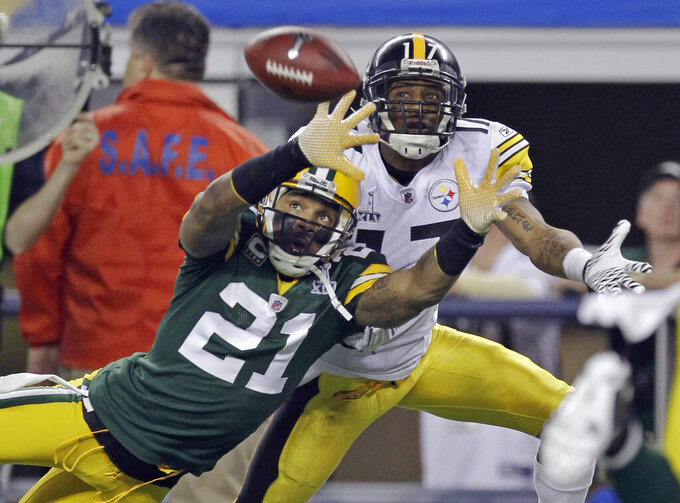 FILE - In this Sunday, Feb. 6, 2011, file photo, Green Bay Packers' Charles Woodson (21) defends on a pass intended for Pittsburgh Steelers' Mike Wallace during the first half of the NFL football Super Bowl 45 football game in Arlington, Texas. Woodson was one of the best football players of all time, joining Hall of Fame running back Marcus Allen as the only players to win a Heisman Trophy, AP Rookie of the Year, AP Player of the Year and a Super Bowl. (AP Photo/Dave Martin, File)

ORLANDO, Fla. (AP) — Charles Woodson walked onto his covered patio, overlooking a pool and golf course, to share some sources of pride with visitors.

Two were expected, and one was not.

Woodson cradled the Heisman Trophy and Thorpe Award he won as a three-way, national championship player at Michigan.

The former Oakland Raiders and Green Bay Packers defensive back also was holding the shoes and brace he wore after he was born with clubfoot.

Growing up in Fremont, Ohio, he overcame the deformity and went on to become a first-ballot Pro Football Hall of Famer, who will be inducted about 100 miles from his hometown on Sunday.

“My older brother and my sister always tell a story of me kind of crawling around and dragging these behind and my brother would grab my arms and pull me," Woodson said in an interview with The Associated Press, holding tiny white shoes attached to a brace. “I would be crying because I couldn't move around, but once he started dragging me around, I'm kind of part of the crew because he's making me a part of the fun.

“And, that would make me smile."

The 44-year-old Woodson has brought joy to countless people in Ohio, Michigan, California, Wisconsin and beyond with his play on the field and his mission off it to build a legacy that transcends sports.

He donated $2 million in 2009 to the new University of Michigan Mott Children’s Hospital and Women’s Hospital, creating the Charles Woodson Clinical Research Fund.

“The opportunity to help save lives, I think that’s really at the root of it,” he said.

With Woodson's money and donations from the public, researchers in Ann Arbor, Michigan, are developing the technology to preserve a heart for a day instead of just several hours for transplants.

“It is truly a special thing that he has created here at Michigan Medicine," said Dr. Gabe Owens, a pediatric cardiologist. “It will contribute to saving lives in the future.”

Over the past two decades, Woodson has been part of a team that has made and sold wine that bears his name after being exposed to the industry in Napa Valley during training camps early in his career with the Raiders. Earlier this year, he added Woodson Bourbon Whiskey to his lineup of business interests.

“His legacy is more than just a football player," said Scotty Passink, a close friend. “It’s as a phenomenal human as well.”

Woodson was also one of the best football players of all time, joining Hall of Fame running back Marcus Allen as the only players to win a Heisman Trophy, AP Rookie of the Year, AP Player of the Year and a Super Bowl.

Tall and lanky in his teens, Woodson was a star running back and defensive back at Fremont Ross High School in northwestern Ohio and he bolted from the Buckeye state to play for the Wolverines.

At Michigan, coach Lloyd Carr lined him up at cornerback and also let him carry and catch the ball on offense along with returning kickoffs and punts.

Woodson lifted the Wolverines to the national championship in 1997, their first in nearly four decades, with a win over Ryan Leaf-led Washington State in the Rose Bowl. He beat out Peyton Manning, a fellow Hall of Fame inductee, for the Heisman as the first and only one to win the award after primarily playing defense.

The Raiders drafted him No. 4 overall in 1998 and he was recognized as the league's top rookie on defense after making 64 tackles, five interceptions and forcing a fumble.

Woodson was an AP first-team All-Pro four times, and was on the second team in four other years. He helped the Packers win the Super Bowl over Pittsburgh in 2011, eight years after coming up short in a Super Bowl with the Raiders against Tampa Bay.

Woodson won the 2009 Defensive Player of the Year award after making a career-high nine interceptions, helping him earn a spot on the NFL's All-Decade Team.

Unlike a lot of Hall of Fame players in the free agency era, though, Woodson was not wanted when he was on the market.

“It was slim pickings for me as a free agent,” he recalled.

Woodson was limited to five games due to a broken leg in 2005, the eighth season of his first stint in Oakland. The Raiders didn't want him back and Green Bay was essentially his only option in free agency.

“Once he went to Green Bay, he got serious about his legacy and he went to the next level," said Marcus Ray, a teammate at Michigan and with the Raiders. “When he went back to Oakland for his last few years, he was still one of the best. He was making splash plays like scoring touchdowns and making sacks.”

Woodson wrapped up his 18-season career with the Raiders after the Packers didn't re-sign him, a fact quarterback Aaron Rodgers recently lamented when he shared concerns about the franchise.

At the age of 39 in 2015, he was healthy enough to play in every game and good enough to have five interceptions, force a career-high four fumbles and make the Pro Bowl for a ninth time in his final season.

Woodson scored 11 touchdowns on defense, a total that is behind only Hall of Famer and former teammate Rod Woodson in NFL history. He had 65 career interceptions to trail just four players on the all-time list.

While he has experienced a lot in life, Woodson acknowledged there will be nothing like hearing his mother, Georgia, introduce him at his Pro Football Hall of Fame induction ceremony and be presented with a gold jacket on stage.

“When I think about it,," he said, “It’s like, ‘Damn, that’s a hell of a journey that you have to go through to be standing up there.’”