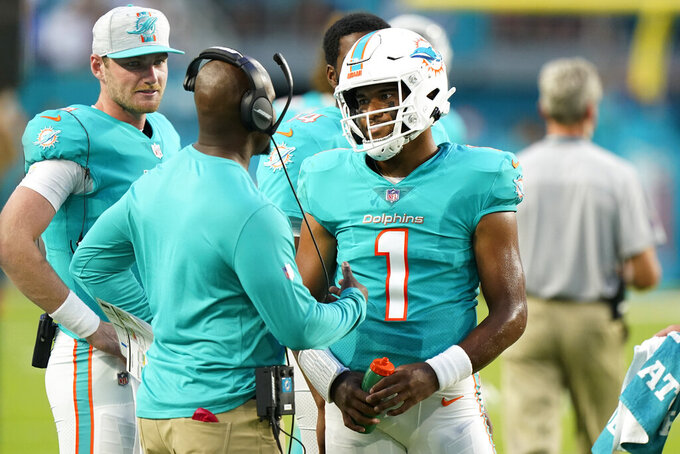 The Dolphins have declined to confirm or deny reports they have engaged in trade talks to acquire Watson, the Houston Texans' star who has been accused of sexual assault and harassment in lawsuits filed by 22 women.

Watson and his lawyers have denied the accusations against him. No charges have been filed, but his availability this season is unclear, and Houston police and the NFL are investigating.

Flores didn't talk specifically about Watson, but discussed the Dolphins' philosophy in acquiring players who need a fresh start.

“There are a lot of things we weigh when we're making decisions — fit on the team, overall talent, salary cap,” Flores said. "When we’re talking about a player or players, we’re always trying to do what is best for the Miami Dolphins. There are a lot of variables. We want a group that is tough, smart, competitive, loves to play and is team first. Those are the types of guys we’re looking for.

“We have a high standard for the people we have in the organization. We want people with high character throughout the building.”

While fans and pundits debated the merits of trading for a three-time Pro Bowl quarterback with legal issues, the Dolphins played their final exhibition game Sunday, and Flores dealt Monday with the upcoming deadline for roster cuts.

Any interest in acquiring Watson would signal a lack of commitment to Tua Tagovailoa, a top-five pick last year who has had a strong training camp and will begin his second NFL season Sept. 12 at New England.

“He has taken a step as far as leadership and working with his teammates to get things right,” Flores said. "He is asking more questions to us as a coaching staff situationally. He has made some very good strides.

“There’s still a lot of room for improvement. Hopefully we continue to make improvement.”