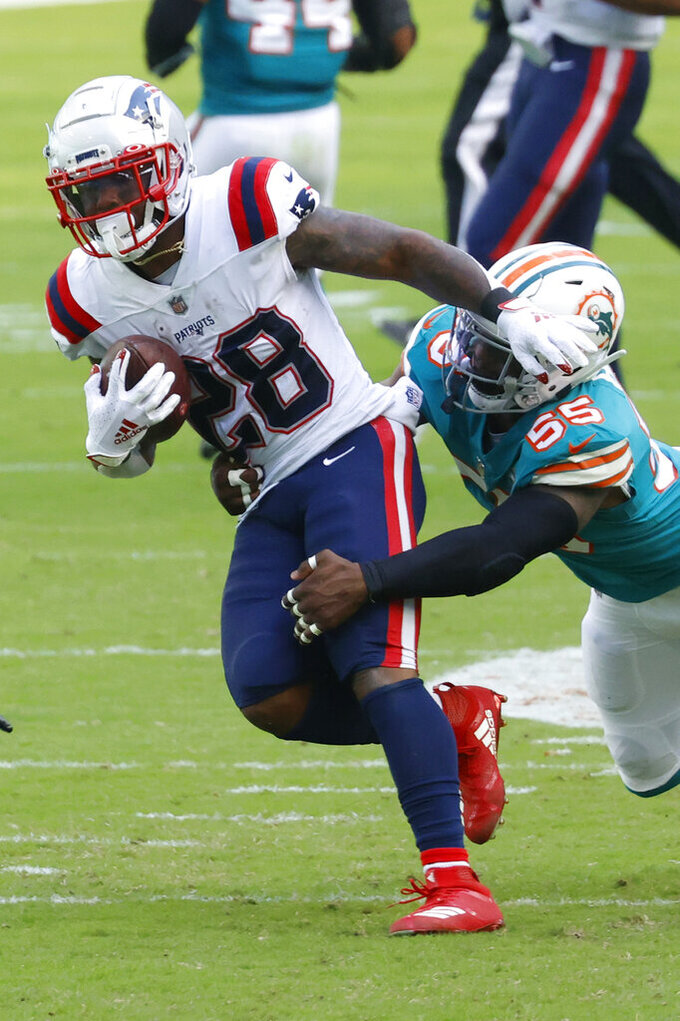 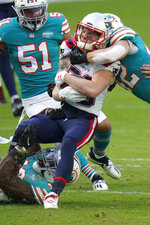 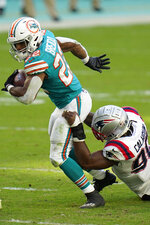 MIAMI GARDENS, Fla. (AP) — The Miami Dolphins’ grinding ground game sent the New England Patriots into full retreat and out of the playoff picture for the first time in 12 years.

Undrafted rookie Salvon Ahmed and veteran Matt Breida combined for 208 yards rushing Sunday to lead the Dolphins to a 22-12 victory over the Patriots, who were eliminated from postseason contention.

The Dolphins entered the game last in the league in yards per carry, and Ahmed became their first 100-yard rusher since 2018, totaling 122 yards and scoring a 2-point conversion on a trick play.

Breida added 86 yards and the Dolphins totaled a season-high 250, the most allowed by New England in seven years.

The Patriots (6-8) will finish at .500 or worse for the first time since 2000, the year they drafted Tom Brady. Their NFL-record run of 11 consecutive playoff appearances will end, and they'll fall one year short of matching the Dallas Cowboys’ NFL record of 20 consecutive winning seasons.

Buffalo clinched the AFC East title with a win Saturday.

The Dolphins (9-5) bolstered their wild-card chances and are assured of a winning record for only the second time since 2008.

“It’s always good to win, that’s why these guys put all the blood, sweat and tears in,” said coach Brian Flores, a Belichick protege. “I’m happy we can bring some joy to our fans, because they deserve it.”

With their three most productive pass catchers sitting out the game because of injuries, the Dolphins kept it on the ground. They were shut out in the first half, but mounted a 14-play, 90-yard touchdown drive midway through the second half to take the lead for good.

Quarterback Tua Tagovailoa ran it in from the 3 on third down after he couldn’t find an open receiver.

“When you have that kind of success in the run game, I think it doesn’t just help the quarterback, it helps the whole team,” Tagovailoa said.

The Dolphins then sprang a hook-and-ladder for the 2-point conversion, with receiver Isaiah Ford flipping a lateral to Ahmed, who ran into the end zone untouched. That put the Dolphins ahead 15-9, and they sealed the victory by mounting a grinding 75-yard touchdown drive on their next possession.

Ahmed became the first undrafted rookie in Dolphins history to rush for 100 yards.

Cam Newton finished 17 for 27 for 209 yards, but for the second consecutive week he failed to get New England into the end zone.

“I just have to play better and be better,” Newton said.

Four times the Patriots settled for a field goal after driving inside the Miami 30. Nick Folk made kicks of 45, 36, 45 and 42 yards.

The Dolphins were unable to convert several scoring chances, including when they drove 95 yards in the first quarter before J.C. Jackson made his eighth interception of the year, picking off a third-down pass by Tagovailoa at the goal line.

“I tried to force one in there.” Tagovailoa said.

An 86-yard touchdown on a fumble return by Miami’s Xavien Howard was reversed by a replay review that showed the loose ball touched another player with a foot out of bounds. The reversal represented a 10-point swing, because New England kept the ball and kicked a field goal on the next play.

Patriots: CB Stephon Gilmore (right knee) left the game in the second quarter and was helped to the locker room. LB Ja’Whaun Bentley (arm) also went to the locker room in the first half. DE John Simon (hamstring) and C David Andrews (calf) were sidelined in the second half. Leading rusher Damien Harris was inactive because of an ankle injury.

Dolphins: They play Saturday at the Las Vegas Raiders (7-7), who have lost four of their past five games.