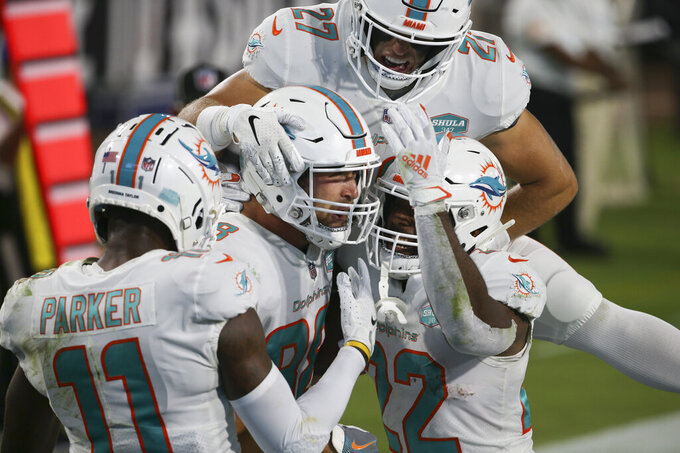 Miami Dolphins tight end Mike Gesicki, center, celebrates with teammates after scoring a touchdown on a 15-yard pass play against the Jacksonville Jaguars during the first half of an NFL football game, Thursday, Sept. 24, 2020, in Jacksonville, Fla. (AP Photo/Stephen B. Morton)

After Gesicki made a leaping catch at the goal line last week in Jacksonville, there were fist pumps and hugs before he pushed two teammates away to simulate playing cards with Durham Smythe in the end zone.

“The planned part was with Durham,” Gesicki said. "Unfortunately he was on the sideline and had to run out onto the field, so that took a little bit more time. Hopefully we’ll get another shot moving forward.”

Given Gesicki's prolific scoring pace of late, more end zone celebrations are likely. That may be particularly true Sunday when the Dolphins (1-2) play host to the Seattle Seahawks (3-0), who are undefeated despite allowing 86 points and an NFL-high 1,292 yards passing.

Gesicki has seven touchdown catches since Week 12 in 2019, tied for the most in the league during that span.

The TDs are just part of the 6-foot-6 Gesicki's emergence as a big weapon in the Dolphins' offense. He had a breakout game in Week 2 against Buffalo with 130 yards receiving, a team record for a tight end, on a career-high eight catches.

The recent productivity represents a dramatic turnaround for Gesicki, a 2018 second-round pick who didn't begin to justify that investment until the middle of last season. His first career touchdown came in his 27th NFL game, which may be why he enjoys an elaborate celebration.

“Every time Mike scores a touchdown or makes a catch, the look on his face is like he has never caught a ball before,” Miami quarterback Ryan Fitzpatrick said.

The Dolphins initially struggled to find a fit for the rangy Gesicki, who isn't a prototypical tight end. He was drafted primarily because of his receiving skills but had only 22 catches for 202 yards as a rookie.

Last year, under new coach Brian Flores, Gesicki made progress in getting open and using his size to make catches against smaller defenders, and he became Fitzpatrick's favorite red-zone target.

One attribute is excellent hands. Gesicki made a spectacular one-handed grab against the Bills, and his touchdown catch at Jacksonville was also acrobatic.

Dolphins receiver Jakeem Grant, who is nearly a foot shorter than Gesicki, can only watch in envy.

“Oh man, Gesicki is an absolute beast," Grant said. "I never think of him as a tight end. I always tell him he’s an attached receiver. I just think that he’s hungry. He smells blood in the water, and he’s ready to eat.”