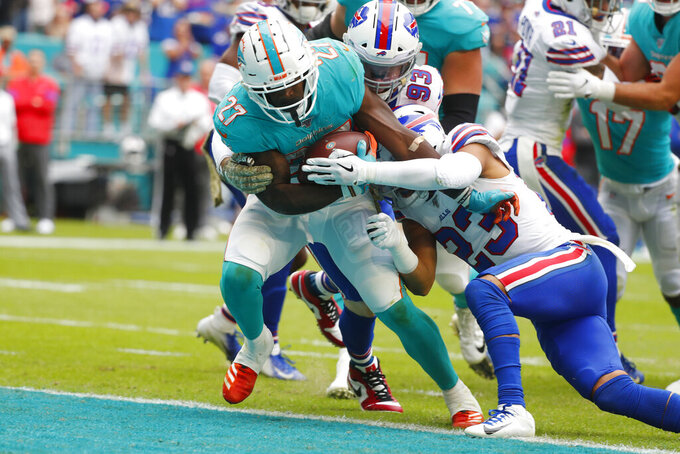 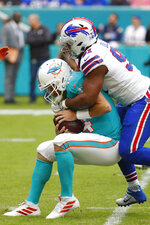 MIAMI GARDENS, Fla. (AP) — When Miami Dolphins running back Kalen Ballage tried to get from the dressing room to the training room following Sunday’s game, the door was locked.

Ballage knocked but there was no immediate response, so he disappeared out a different doorway, stymied once more at the end of a frustrating afternoon.

Ballage netted just 9 yards on nine carries, and the Dolphins totaled only 23 yards rushing in their 37-20 loss to the Buffalo Bills.

The sputtering ground game was nothing new for the Dolphins. They came into the game ranked last in the NFL in rushing and yards per attempt, and Ballage ranked 215th at a woeful 2.1 yards per try.

That made Miami no match for Buffalo’s stout front seven.

“We made them look a lot better than they really are,” tackle Jesse Davis said.

Bills linebacker Lorenzo Alexander agreed that the Dolphins contributed to their own problems.

“We moved a lot, and they didn’t handle it well,” Alexander said. “We took advantage of some of their lack of execution.”

“It starts with not establishing the running game, not having positive plays early,” Miami center Dan Kilgore said. “It opens things up for them.”

Part of the Dolphins’ chronic problem is that because of injuries and roster moves as they rebuild, they’ve started seven different combinations from tackle to tackle.

“It takes time to build that chemistry,” Davis said, “but I don’t want to blame anything on that.”

The lack of continuity, however, has clearly hurt communication and led to unsightly breakdowns.

“It's tough to win in this league if you can't run the football,” coach Brian Flores said.

Ballage’s inability to break tackles is part of the problem, and in four starts this year, he has totaled 57 yards.

But the Dolphins have no experienced alternative because they traded Kenyan Drake on Oct. 28, and Mark Walton is halfway through a four-game NFL suspension.

The Dolphins’ best success on the ground Sunday came when they went with the wildcat on consecutive plays to score their final touchdown.

Ballage took the snap and carried up the middle for 7 yards — his longest run of the day. On the next play, Ballage handed to receiver Jakeem Grant on a jet sweep for a 7-yard score.

From other formations, the Dolphins netted 9 yards in 11 carries. That’s 2½ feet per attempt.

Because they were repeatedly stuffed in the early going, the Dolphins faced third-and-13 or longer four times in their first three possessions.

“Negative runs on first down and second-and-longs and you get into difficult spots,” quarterback Ryan Fitzpatrick said. “That’s what the Bills’ defense thrives on, and they did a great job early with that. We’ve got to be able to find ways to run the ball better.”