Dolphins heading into 2nd half of season with renewed belief 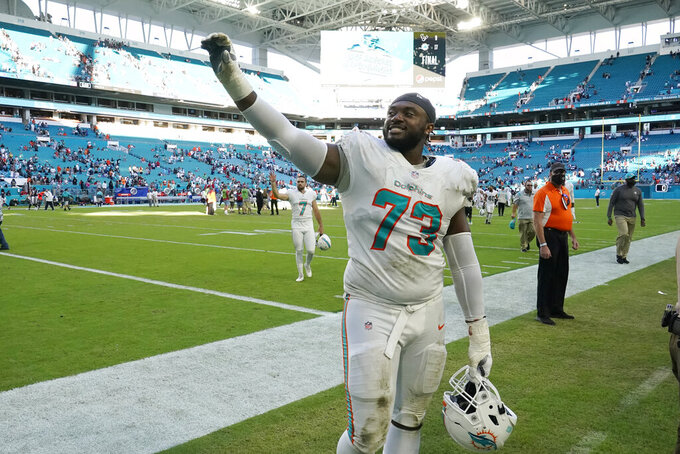 MIAMI GARDENS, Fla. (AP) — First, the bad news. The Miami Dolphins are 2-7. Only three teams in franchise history have had a worse record after nine games. And they’re alone in last place in the AFC East.

Now, the good news. They’re on a one-game winning streak.

Any victory, big or small, is worth celebrating for the Dolphins these days. They’re heading into the second half of their season — or the last 47%, technically, in this new 17-game NFL world — with actual evidence that what they’ve been saying for nearly two months was indeed true, that continuing to work and believe can lead to the desired result.

A 17-9 win over Houston on Sunday won’t merit anything close to inclusion in the Dolphins’ greatest-victory archives. They turned the ball over five times and snapped a seven-game losing streak by beating a team that is now on an eight-game losing streak.

But it could be a springboard. Not to a playoff run, necessarily — those odds are so long they’re not even worth discussing — but to figuring out who needs to be with the Dolphins in 2022 and beyond. Rowe was right; the longer the losing streak went, the higher the chance that Miami would see people simply trying to get through the rest of the schedule without necessarily caring as much as they should.

“Winning is always good,” Dolphins coach Brian Flores said. “You know, that’s why these guys prepare. They work hard. They give great effort. It’s always good to win. It’s hard to win in this league. Small margin for error.”

With half the season in the books, there is more than enough evidence to draw some conclusions.

Ballhawking. The Dolphins haven’t forced turnovers at the same rate as they did last season when they led the NFL. That said, they’re still tied for fourth in the NFL entering Monday with seven fumble recoveries this season. And they’re one of nine teams that have come up with more than 50% of the fumbles that opponents have put on the ground.

The offense. And just about all of it. The lack of explosive plays is entering historic realms. The Dolphins are the third team since 1998 without a 50-yard pass or 25-yard rush in the season’s first nine games. The other teams on that list are the 2015 Houston Texans ... and the 2019 Dolphins. Entering Monday, the Dolphins also ranked last in yards per pass attempt and second-to-last in yards per carry.

TE Mike Gesicki. He put the flashy side on display Sunday in the win over Houston with a pair of one-handed grabs, but the reality is that Gesicki has been Miami’s steadiest player in big moments. He’s second on the team in receptions behind rookie WR Jaylen Waddle and has accounted for more scrimmage yards in fourth quarters (243) than any two Dolphins combined. He is the primary option late; Miami has nine plays of 20 or more yards in fourth quarters this season, with six of them being catches by Gesicki. The free-agent-to-be is going to get paid this winter, and it would make no sense if Miami let him go elsewhere.

WR Will Fuller. Anyone can see why he was needed; the Dolphins simply can’t get the long ball going in the passing game and Fuller was signed after last season to be the guy to help them change that. But he missed one game while completing a suspension imposed by the league last season, another for personal reasons and five more since with a broken finger. There’s still enough season left for him to show the Dolphins if he’s worth another look in 2022, though from a return-on-investment standpoint Miami will surely note that he’s made about $5 million in salary so far this season for four catches that went for 26 yards.

QB Tua Tagovailoa’s status is yet again in question, now with a finger issue on his left, or throwing, hand. It affects his grip, which affects how far he can throw the football, and that’s why the Dolphins went with Jacoby Brissett against Houston. Brissett has thrown 56% of the Dolphins’ passes this season, but Tagovailoa is slightly better when it comes to passer rating, yard averages on completions and attempts, and completion percentage.

.500: That’s the average winning percentage of what’s left on the Dolphins’ schedule (with the Jets factored in there twice because those teams still have to play twice). Tennessee and Baltimore are two of the AFC’s best, yes, but it’s not like Miami has a slew of Super Bowl contenders left on the schedule.

With the seven-game losing streak now over, the Dolphins have a short week to get ready for a visit from South Florida native Lamar Jackson and the Baltimore Ravens on Thursday night.