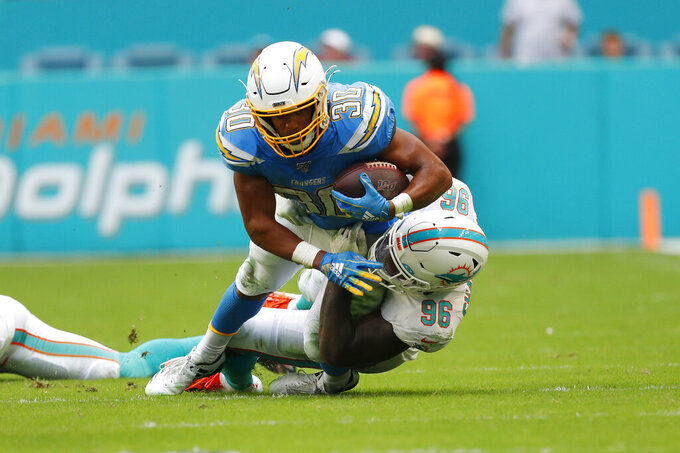 MIAMI (AP) — Josh Rosen was still in the first quarter of his first start with the Miami Dolphins when he lobbied his coach to go for it on fourth down at the 3-yard line.

Like most everything this season for the Dolphins, Rosen’s attempt was unsuccessful. The Dolphins opted to kick a field goal and went on to lose 31-6 at Dallas.

“If I had a little more say, I would have loved to Peyton Manning it, and wave them off and call the play,” Rosen said. “But we’re not there yet.”

Rosen was the 10th overall choice by the Arizona Cardinals in 2018 and became expendable this spring when they used the No. 1 overall pick to draft Kyler Murray. Defensive end Taco Charlton was the 28th overall selection by the Dallas Cowboys in 2017, and Miami claimed him after his release last month. Defensive tackle Robert Nkemdiche was the 29th overall choice by the Cardinals in 2016, and they released him in July after three injury-plagued seasons.

In the search for players to form a foundation for rookie coach Brian Flores, the Dolphins are looking everywhere _ even in the first round. That means second chances for Rosen, Charlton and Nkemdiche.

The Dolphins’ bye this week provided a chance for them to assess a historically bad start. They’re 0-4 and have been outscored 163-26, the worst four-game point differential in NFL history.

Rosen and Charlton have been two of the few bright spots. Nkemdiche has yet to play while he completes his recovery from a 2018 injury.

Each is eager to prove that his former team made a mistake by letting him go.

“I’m happy to be in this position,” Charlton said, “and get a chance to get on the field and make plays and show what I can do, and show my ability and show how much I’ve grown over these past couple of years.”

While a first-round pedigree means a higher profile, Flores doesn’t put much stock in it. One surprising contributor for him amid this season’s awful start has been receiver Preston Williams, an undrafted free agent.

“You can get players really anywhere,” Flores said. “Let’s not worry about what round you were in. At the end of the day, it doesn’t matter. What matters is whether you are doing the things necessary to become the best player you can be.”

Miami’s front office has showed it embraces that philosophy, because the Dolphins have parted with first-round picks, too. This year they traded Ryan Tannehill, Minkah Fitzpatrick and Laremy Tunsil.

“I love Christian,” Flores said. “He has so much ability and leadership potential. I think he’s going to be here a long time and be the face of what we want to be about.”

It’s too early to know whether Rosen, Charlton or Nkemdiche will stick. Nkemdiche hasn’t even played _ he’s still recovering from ACL surgery last December, and might come off the active/physically unable to perform list later this month.

Charlton wasn’t even active for the Cowboys’ first two games this season, but he has a sack in each of his first two games for Miami. In last week’s loss to the Chargers, he also had six tackles, one tackle for a loss and two quarterback hits.

For a defense on pace to give up the most points in NFL history, the 6-foot-6 Charlton has stood out.

“I like him,” Flores said. “He brings energy. He’s got length. He’s got toughness. He’s got a long way to go from a pass-rush standpoint as far as using his length, using his speed, using his ability and putting it all together; but I think there’s a lot of potential here.”

The opinion is the same regarding Rosen, who is getting his second and perhaps final chance to be a franchise quarterback. Verdicts on all players will come while losses likely mount.

“As an organization,” Rosen said, “we are just trying to like sort of find our identity.”

In the meantime, castoffs from other teams are welcome in Miami, even if they come with the taint of a first-round fizzle.