Dolphins likely to take a target for Tagovailoa -- but when? 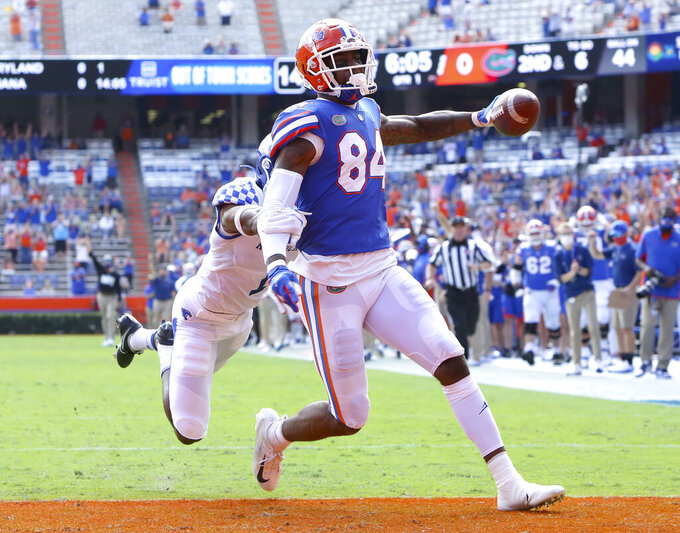 MIAMI (AP) — The Miami Dolphins have already been busy in the draft even though it hasn’t started yet.

They've made three trades involving their top selection, moves motivated by Miami's desire to stockpile picks without giving up the chance to acquire a playmaking target for quarterback Tua Tagovailoa.

The Dolphins might not be done dealing. They have the sixth choice, but with the draft deep in elite pass catchers, they could decide to move up or down yet again.

When their pick is finally made, the Dolphins are expected to take Florida tight end Kyle Pitts, LSU receiver Ja’Marr Chase, or one of two Alabama receivers, DeVonta Smith or Jaylen Waddle.

With Mike Gesicki coming off a breakout season, tight end isn't a position of need for Miami, but Pitts is regarded as perhaps the best college player at the position in decades.

Pitts could be first non-quarterback drafted, and if the Dolphins want him, they may need to swing a deal for the Atlanta Falcons' fourth overall choice. The Dolphins have leverage because they hold four of the top 50 selections.

If Pitts and Chase are gone when the Dolphins' turn comes, they might accept an offer to trade down, on the assumption they can still land Smith or Waddle a few picks later.

“We’ll always listen to everything,” general manager Chris Grier said. “We’ve shown that. You owe it to your team and your organization to always listen to any offers that may or may not come. As the draft falls and gets toward our pick, if someone wants to call and they make an aggressive pitch to us, we’ll evaluate it.”

The Dolphins originally held the No. 3 overall pick, which they obtained from Houston in a 2019 trade that sent tackle Laremy Tunsil and receiver Kenny Stills to the Texans.

The Dolphins then immediately traded the 12th pick and a 2022 first-rounder to Philadelphia for the No. 6 overall choice.

Last month's dealing signaled the Dolphins have ruled out again drafting a quarterback with their top pick, and instead are all-in with Tagovailoa.

The former Alabama star was the No. 5 overall selection a year ago, became Miami’s No. 1 QB in Week 8 and went 6-3 as the starter. He also was benched by Flores in two games and played poorly when stakes were highest in the season finale, a 56-26 loss at Buffalo.

Miami is expected to focus heavily in the draft on upgrading Tagovailoa's surrounding cast. Receiver Will Fuller was the Dolphins' most notable signing in free agency, and the need remains high for playmakers who can benefit from Tagovailoa's excellent accuracy.

The Dolphins also hold the 18th overall pick, and might use it on a running back. One possibility is another former Alabama star, Najee Harris.

Perhaps Miami's biggest need is an edge rusher, and that will likely be addressed in the second round. Linebacker and cornerback also lack depth.

Along with playmakers, the offense remains in the market for shoring up in the line, where Miami started three rookies last year and seems perennially in need of revamping. There's a slight chance they'll shock prognosticators by using their top pick to select Oregon tackle Penei Sewell.

Upon hiring Flores two years ago, owner Stephen Ross pledged to build through the draft, and that remains the approach after the Dolphins doubled their 2019 win total to 10 last year.