Dolphins MVP Ryan Fitzpatrick might not be back next season 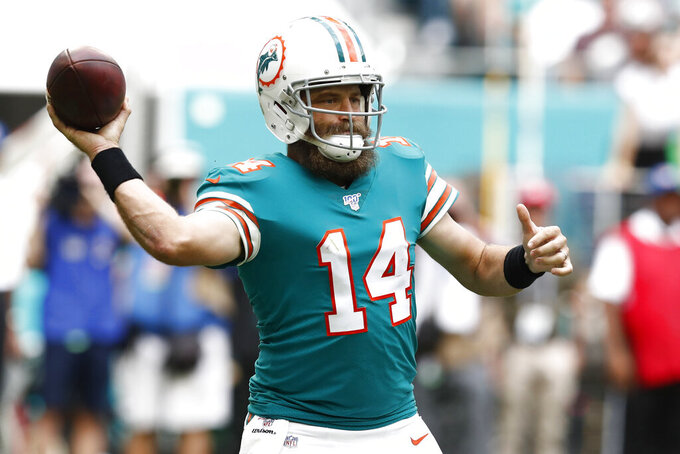 DAVIE, Fla. (AP) — The Miami Dolphins' most valuable player might not even start next year, which hints at how much the team hopes to upgrade in the offseason.

It also explains why Ryan Fitzpatrick might take that MVP award and head into retirement.

Not that he would exactly be quitting on top; the Dolphins are 4-11 entering Sunday's season finale at New England. Fitzpatrick has started all four victories and eight defeats, dropping his record over 15 seasons to 54-83-1.

But to the Dolphins, the 37-year-old Fitzpatrick would be going out a winner — not that he has said whether he wants to call it quits or play another season.

“I don’t know that it will be a difficult decision,” he said Thursday. “I’ll go through the due process and figure things out. ... Part of it for me is just sitting down with my family. That’s something I owe to them and my wife, and figuring out that end of it.”

Another factor is whether there's a starting job for him. This week Fitzpatrick was chosen the Dolphins' MVP by the media, and also won the leadership award in a vote by his teammates. Even so, owner Stephen Ross has said the top priority in the offseason will be to acquire a franchise quarterback.

That would send Fitzpatrick to the bench. He's under contract for $5.5 million in 2020 but wants to start.

“I love being out there and playing and being part of the solution,” he said.

That was Fitzpatrick's role for most of 2019, and he's the biggest reason the rebuilding Dolphins aren't on the verge of an 0-16 finish.

Fitzpatrick lost the No. 1 job to Josh Rosen in Week 3, regained it in Week 7 and led the turnaround from an 0-7 start. Miami has won four of its past eight games, and in the past six weeks Fitzpatrick has thrown for 1,845 yards, which ranks second in the NFL during that span.

In last week's overtime win against Cincinnati, he threw for 419 yards, the highest total of his 155-game career.

Fitzpatrick even leads the Dolphins in rushing.

“He plays with so much joy,” center and captain Daniel Kilgore said. “For him to be as old as he is and still going out and running around making throws and doing things that normal people can’t do, it’s pretty exciting. I love to play for him.”

Rookie coach Brian Flores stuck with Fitzpatrick down the stretch rather than give Rosen another tryout, saying the veteran gave Miami the best chance to win.

“He has done a great job for us this year,” Flores said. "I love that he’s our quarterback.”

But at some point, the Dolphins will want to move on. And Fitzpatrick's not keen to carry a clipboard, especially when it means missing more time with family.

He's a father of seven, and his wife and kids stayed home in Tampa this season while he played in Miami. The separation tugged at him.

“It’s the dance recital, the soccer game, being able to present for the student of the month award, or being able to go have dinner at Chick-fil-A and watch the guy make balloon animals,” Fitzpatrick said. “Those are the things you miss out on that each year, as they get older, makes it harder and harder to miss.”

On the other hand, with a grin Fitzpatrick noted one advantage in continuing his career: Full-time fatherhood will present fresh challenges.

“I can't pass off some of those duties,” he said. “I think retirement is going to be a lot more difficult than playing football.”