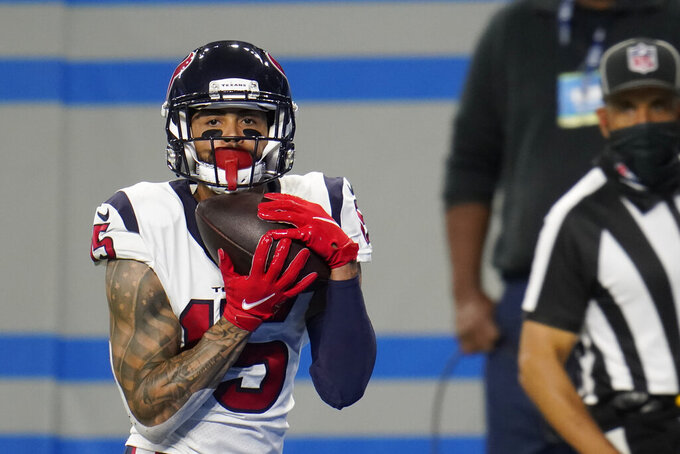 FILE - In this Thursday, Nov. 26, 2020 file photo, Houston Texans wide receiver Will Fuller catches a 34-yard pass for a touchdown during the second half of an NFL football game against the Detroit Lions in Detroit. Receiver Will Fuller has agreed to terms Thursday, March 18, 2021 on a one-year deal with the Miami Dolphins, who were eager to acquire a deep threat to stretch the field.(AP Photo/Paul Sancya, File)

MIAMI (AP) — Receiver Will Fuller says he's excited to play in 16 games in the 2021 season for the Miami Dolphins.

If they make the playoffs, maybe he will.

Fuller will miss the opener to complete a six-game suspension for using performance enhancers. Hampered by injuries, he has played in fewer than 12 games in each of the past four years.

He's eager to erase doubts about his durability after agreeing last week to a $10.6 million, one-year deal with the Dolphins.

“I wanted to take a one-year deal to prove my worth in the league,” Fuller said Tuesday. “I've had my fair share of injuries. I've been working really hard. I want to prove to the Dolphins after taking a chance on me that I'm a player they would love to have long term.”

Fuller spoke from Houston, where he spent his first five NFL seasons after the Texans made him a first-round draft pick in 2016. This year he became a free agent for the first time, and said he's in the midst of a rigorous offseason training program.

“This is probably the best I've felt in my career, so I'm excited to play 16 games this season,” he said.

“Tua is an electric player, and I'm super excited to play with him,” Fuller said.

Fuller might not be the Dolphins' final upgrade in the receiving corps this offseason. There's speculation they'll take Alabama's DeVonta Smith or LSU's Ja'Marr Chase with the third overall pick in next month's draft.

Fuller's all for it.

“The more talent we've got, the easier it will be for all of us,” he said. “I would love another receiver. Keep bringing talent, and we're going to keep making plays.”

The Dolphins especially liked his receiving average of 16.6 yards per catch, which ranked second in the NFL among players with at least 50 receptions. He's expected to stretch the field for Tagovailoa, who averaged only 9.8 yards per completion as a rookie, which ranked 31st.

“Having the ability to score on any given play makes things a lot easier for me,” Fuller said. “It opens up a lot of things underneath.”

During contract negotiations, Fuller said, he discussed with the Dolphins his suspension. He has said he took a medication he was prescribed that he believed to be permitted but was banned under league policy.

“It was a one-time thing, completely accidental, that is never going to happen again,” he said.